Some of the best interview imaginable between the greatest folks on Earth.

The President sat down with Fox News’ Sean Hannity at Mar-a-Lago Sunday morning to discuss his administration’s policies, foreign affairs, and how many Big Macs he can eat in one sitting. Below are excerpts from the interview, as some of their discussion remains off the record.

Sean Hannity: Good Evening, Mr. President, and thank you for taking the time to speak with me. You’re doing the American people a great service.

President Donald Trump: Thank you, Sean. “Sean.” Funny, I can call you by your first name, you call me “Mr. President.” Got to, have to. But yes, you’re welcome, so welcome. Interviews, they’re so important, you understand. Obama, Crooked Hillary, never did a single interview.

Sean Hannity: Before we get started, I must say, you look fantastic. I know the folks at Fox & Friends, and I look like a zombie if I listen to them for just twenty minutes. But you, Mr. President, you listen to them endlessly and still manage to be as vivacious as ever.

President Donald Trump: “Vivacious.” Love that. Great words, Sean, you always have the best words. Like me, that’s why we get along. Smart. Both smart. Intelligence, can’t get enough of it. And I have so much already.

Sean Hannity: So let’s get right into the meat of it: immigration. That’s right, I said “meat.” We’re going to stop saying “carne” in this country, aren’t we, Mr. President?

President Donald Trump: No more “carne,” Sean. Except at Trump Tower. Menus are so exotic, you order stuff, different languages, fancy. The best foreign flavors, Sean, none of the people. Some of the people, actually, but only the good ones from Norway and other countries I can name and know so much about. And all vetted legally. Extremely legally.

Sean Hannity: Simply allowing Americans to speak English again is more than most presidents do in eight years, but the liberal spin masters are always on your back for the things you don’t have time for, like acting “presidential,” being politically correct, or filling high-level government positions. They have no understanding of everything on your plate.

President Donald Trump: So much on my plate, Sean. So much. And it’s meat. Meat on my plate. Two Big Macs, two Filet-O-Fish. Fish, not meat, some say, but you understand. And that’s just the beginning. The mainstream media, the lame-stream media, the media, they don’t understand. Not very… smart. You see. I’m the best eater. I finish my whole plate, all the fish and the meat—not carne, anymore—and I still have room for my Shamrock Shake. I know, I know, Shamrock Shake is only available certain times of year. I stock up. Plan ahead. Always planning. Plate planning.

Sean Hannity: Let’s move on to the economy. Black unemployment is down, yet you have very little support from the African-American community. It’s simply disrespectful, if you ask me.

President Donald Trump: Not asking you, you asking me. Interviews, how it happens. But the blacks are so disrespectful. Always with the words, Sean, can’t get enough of your words. It’s sad. I do so much for the blacks. More than Obama, and he was a black, though we never did see that birth certificate, so who can say for sure? If anyone, me, but I can’t. Nobody can, not without the birth certificate. Scary. And you have the Democrats, they rely on the blacks. I don’t. I don’t take them for granted. Always proving how much good I do with all the good I do. Also, it’s just a small number against me. Almost none, according to the polls. They’re disrespectful. Still, overall, so good. The best blacks love me.

Sean Hannity: Yet this small, albeit vocal, group of traitors still calls you racist. 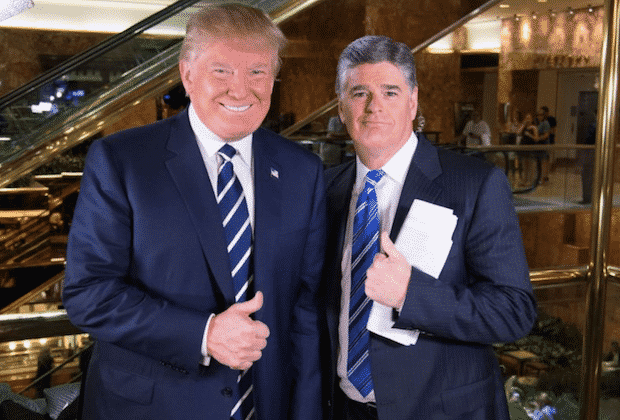 President Donald Trump: I have never, ever been a racist. Ever. No racism, not racist. In my body, Sean, there’s no racism. None. Zero. Said this, proven this so much. Least racist person, I would say, maybe, ever. Probably. Calling me racist, it’s like calling Martin Luther King racist. None.

Sean Hannity: Speaking of all the good you do for the African-American community, let’s dive into one of the most serious issues facing our nation. An issue you have been brave enough to “take a stand on,” if you will. An issue that will define the world forever: black athletes kneeling for the National Anthem. How do you respond when those ungrateful, spoiled athletes spit on the constitution like that?

President Donald Trump: You get me, Sean. I wanted to talk about the Anthem, you talk about the Anthem. As soon as you say it, I want to say it. I say it, you say it, we say it. Words all the time. So. These ungrateful players, we give them everything. They don’t deserve anything, and we give it all to them. Silver platters. Gold platters. The most valuable platters, and you know I know my platters. I have more platters than the biggest platter guys. I am the biggest platter guy. Platters in Trump Tower, wow. And these athletes don’t stand. I have never seen them standing. They hate our country. I’ve seen them hating our country. Not real Americans, I tell them. I fixed it, fixed the issue. Now they stand. I see them standing every time now. Have to. Law. I am the flag.

Sean Hannity: Well said, Mr. President. You solved a crisis that very well could have destroyed the country our Founding Fathers fought so hard to create. I certainly cannot think of a single human being who has ever sacrificed as much as you for our great nation. Thank you for your service.

President Donald Trump: Thank you, Sean. Thanks. Wow. Is that it? Are we done? Good interview. Some of the best. I could’ve done better if I was asking the questions, but I was answering the questions. That’s how it works, me as President and you as you. Part of the media but not the fake news media. Important to remember how truthful you are. But me? I’d be the best interviewer since, maybe, I would say, probably ever. So much truth. Still, this was good.

Sean Hannity: Actually, Mr. President, I have several more questions. Your staff said you’re not missing any golf to be here, so there’s no rush.

President Donald Trump: Fine, fine. So much to do, but for you, Sean, for my friends at Fox, the Fox & Friends, and I know you’re on Fox and a friend but not a Fox & Friend friend, I’ll continue. Anyone else, I walk right out.

Sean Hannity: Thank you so much for your kind words, and thank you again for taking the time to speak with us. You really are the greatest president ever. Changing gears: What can the American people expect regarding the North Korea threat?

President Donald Trump: No threat. Rocket man. Thinks he’s a dictator. He’s not. I know dictators, Sean. I know. He’s not. Plus, you got so many Asians in Korea. Nobody in the mainstream media talks about that. Interesting. 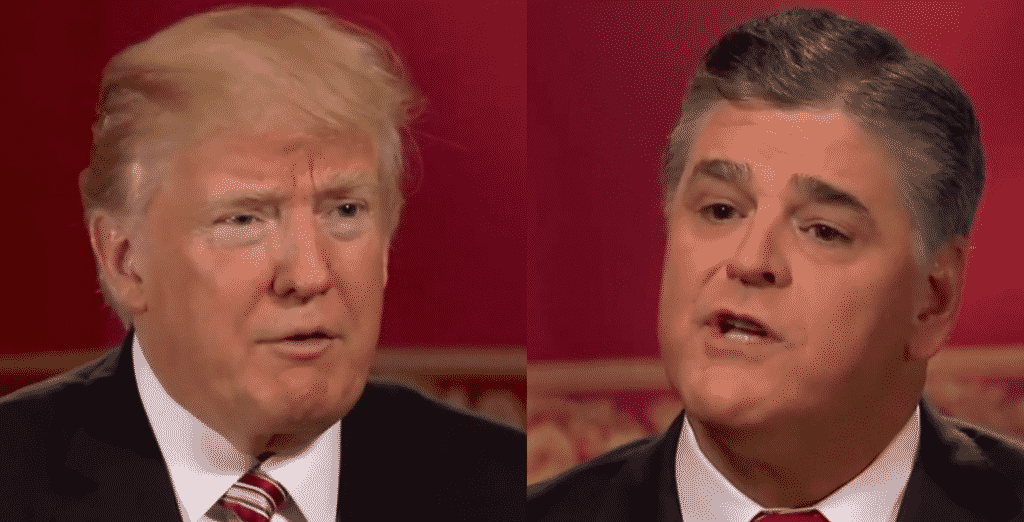 Sean Hannity: It’s that kind of reassurance that allows me—and all real Americans—to sleep soundly at night, knowing we’re safe in your big hands. Meanwhile, liberals stay up worrying about this so-called “global warming.” It’s probably impossible to talk to them because they only want to limit our free speech, but how can you explain to elitist scientists and professors that it’s just a Chinese hoax?

President Donald Trump: I tell them, snowed at Mar-a-Lago yesterday. No warming. Common in Florida. No change. When I pulled out of the Paris Agreement, I created the safest jobs for Americans. The most jobs of any president, more jobs than there are people, even. Everyone’s hiring, can’t fill the spots. And sending people back to the mines. They love it down there. So safe and cool, so cool. These hotshot PhDs, they’ve been totally hoodwinked. Wouldn’t last a day at Trump University.

Sean Hannity: They think they’re so smart, but they can’t even wrap their minds around the fact that they fell for propaganda from a hostile foreign power.

President Donald Trump: The left, Sean, no ability to wrap their minds around the real facts, the facts, the truth. Fake, fake news. Too busy with witch hunts, the traitor Mueller, and cheating Bernie out of the nomination.

Sean Hannity: I’m glad you brought up the leftist, globalist, George Soros-led conspiracy. It’s made it so hard for you to do your job, and yet you’ve still managed to accomplish more in just over a year than every other president combined. Can you provide an update on Russia? When can we expect an indictment of Hillary Clinton?

President Donald Trump: Sean, my update from the Russia investigation is so good, the best: Hillary will be locked up by the end of next week. How does that sound? Just came up with it on the spot. Brain works that fast. Seven days, Hillary will be in prison, and America will be great again.

Sean Hannity: Even after all this time, you never cease to amaze me, sir. You are never afraid to face my tough questions, unlike the rest of the swamp. You got in the cage, you wrestled with the beast, and you came out on top. As always. You truly are the greatest man the world has ever known. God bless America, but most importantly, God bless you.

Related
An Interview with World War III
Clint Lohse
An Open Letter to the West Towne Mall Jeweler with the Same Last Name as Me
Geoffrey Asmus
Transcript of the “Big Little Lies” Season 2 Group Chat
Talene Monahon
How to Nail Your Next Job Interview Even Though the Return of Xwq, the Celestial Obliviator, is All You Can Think About
Alexandro Strauss
Resources