Prepare to have your libido reanimated by these undead pieces of meat.

They're baaaa-aaack! For the past three Halloweens Andrei Trostel and I have tackled cinema's most voluptuous vampires, washboard-abbed werewolves, and wellsome witches. Now, PIC's resident mad scientists—Andrei, the Washingtonian oncologist who looks like a TV wrestler, and me, the Aussie entomologist who prefers to pin and spread hot guys over insects—are tackling the Top 5 Sexiest Male and Female Zombies.

This year we've picked a somewhat daunting monster to find attractive. As walking corpses, zombies tend not to be included very often when erotic fantasies come to mind (excluding those of certain morticians and senior Republican senators). Then there's the whole smell factor: gasses emitted by corpses include Putrescine, Cadaverene and Repugnine, a clue that they're not exactly being bottled and marketed as Calvin Klein's new must-have fragrance. Even if you do find a fresh-ish zombie you wouldn't mind getting fresh with, the bits you like will almost certainly fall off in the heat of passion (and if you're really unlucky, lodge in you, prompting an "I fell on it in the shower" ER visit). 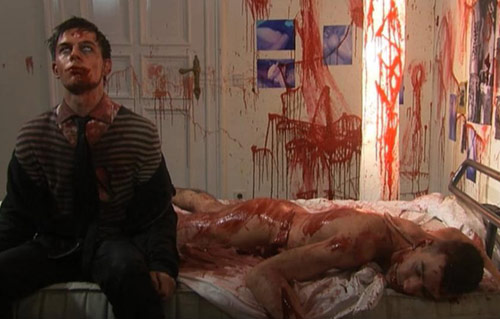 The one on the bed is neither Otto, nor Up. He is Dead People though.

Belgian actor Jey Chrisfar toplines as the titular Otto, a nice enough young man who wakes up on a highway with a) no money b) no clothing and c) no pulse. Otto is a zombie whose last memory is of sexing up his boyfriend, so he goes on a cross country trek to find his lost love. On the way he falls under the influence of a director who is delighted to be able to put a real zombie in her zombie film, as well as a whole host of men who want to test just how stiff Otto is by bedding him, discovering too late that his taste in men is actually a taste FOR men.

Crisfar dominates the movie with a vulnerable performance (well, as vulnerable as someone who fucks/eats/fucks again his lovers can be), and you can sense the real sadness behind those pallid eyes every time he fails to realize "beefcake" is an expression. 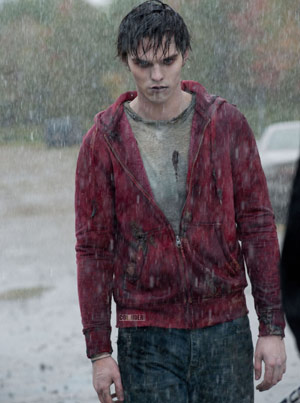 Okay, so it's technically cheating as the film isn't out until early next year, so bite me (not in the brains). Warm Bodies has been described as "doing for zombies what Twilight did for vampires," which I assume means the zombies therein will take their shirts off a lot and fight homoerotically over some whiny bitch both of them are way better than. So that's thumbs up from me!

Warm Bodies apparently deals with your standard issue Zombie Apocalypse that goes somewhat awry when lead zombie (known only as "R") chows down on the heroine's boyfriend. After eating the boyfriend's heart, R starts developing romantic feelings for the girl, and pursuing her for reasons other than culinary, even going so far as protecting her from the other undead. Sounds awful, and will probably water down zombies for tween girls just like Twilight did for vampires, but "R" is played by the spectacularly beautiful British actor Nicholas Hoult (A Single Man, Beast in X-Men First Class) so I'm willing to give it the benefit of the doubt. Note to filmmaker: my benefit of doubt will go up the more clothing Hoult takes off.

3. John Bernthal as Shane in The Walking Dead 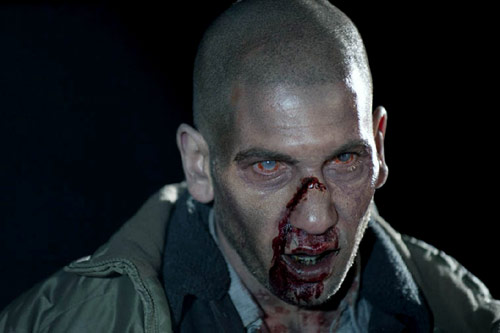 Rick helpfully stabbed Shane in the gut, rather than shoot him in the head, so he could return and play with Carl.

During this televisual tale of a heroic deputy sheriff traversing a zombie-infested USA to find his missing wife and child (never seen that plot before, Hollywood—how about, for a change, giving us a guy crossing a zombie-infested wasteland to save his boyfriend and cat?) several things happen to imperil the cast, most of them revolving around the little kid, Carl, the most annoying child in the history of horror movies. Every single episode, someone says "Carl, stay here in the house. There are zombies outside." And every single episode, Carl goes outside, gets trapped by zombies, has the gall to be SURPRISED they try and eat him, and needs rescuing. By the ninth time, I would be like, "Okay, he obviously WANTS to be eaten. Go ahead Carl, go play with your undead friends. Here, I'll give you a fresh bloody wound to get you started."

In between all the moronic child rescuing, however, is a tense stand-off between hero Rick (Andrew Lincoln) and his former best friend, Shane (John Bernthal), who in Rick's absence had taken up Rick's position in Rick's wife's life (also her vagina). This culminates in Rick getting stab happy with Shane in a field (not of dreams) and then having the gall to look surprised when Shane returns moments later, after which he makes a good-looking corpse, until Carl does something useful FOR THE FIRST TIME EVER and gives him a lead lobotomy.

4. Thom Matthews as Freddy in Return of the Living Dead, Part I and II 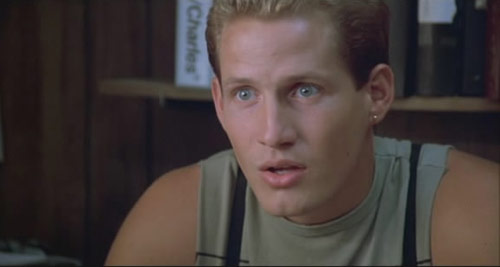 The zombie "deer caught in the headlights" look.

Much like we have Danny Boyles' 2002 "zombie" movie 28 Days Later to thank for the annoying (if exhilarating) phenomenon of "Sprinting Zombies" (Rigor Mortis, look it up, Danny boy), Return of the Living Dead is single-clawedly responsible for all subsequent zombies wanting to nosh on fresh human brains. Before Return of the Living Dead, they ate the whole package; and not just the package, but the rest of the body—females too!

This brilliant 1985 film and its first sequel from 1987 (don't bother with Part III, IV or V, which are all more rotten than their undead stars) was the first zombie film from the 80's which managed to be superb, had "Living Dead" in the title, and featured zombies but did NOT feature the words "George Romero" anywhere in the credits. For those 3 or 4 people who have been living in a cave in Antarctica's Dry Valleys for the past 25 years (although if they travelled a few clicks South to McMurdo Station they'd have had WiFi access and probably seen it), Return of the Living Dead features two goofball workers at a medical supply warehouse. Frank (character actor James Karen) and Freddy (Thom Matthews, Friday the 13th Part VI: Jason Lives) accidentally rupture canisters containing the preserved corpses from the "real life incident" Romero's Night of the Living Dead is based on. The gas from the canisters then escapes and turns Frank and Freddy—and about a zillion cadavers at the cemetery next door—into re-animated, brain-hungry undead monsters.

The first half of the film is wildly entertaining and funny, and only loses a little momentum in the second half when things become darker and more serious. Thom Matthews is in fine form—metaphorically and physically—as the bumbling but cute Freddy, at least until he succumbs to zombification and gets hippocampus-happy. Still, he wouldn't be the first guy I've dated with bad gas problems…

5. Corey Sevier as "Chip" in Osombie (2012)(okay, he's not actually a zombie, but he's the lead male and he's FIGHTING zombies—work with me here, people!) 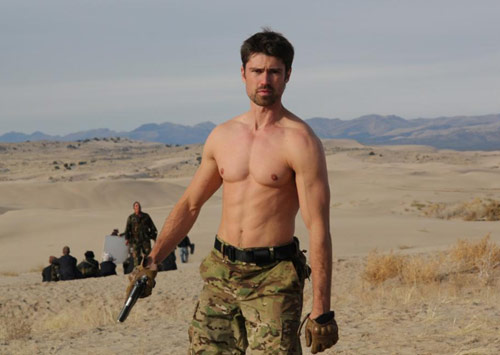 In Osombie, Osama Bin Laden returns from his watery final resting place and leads an army of undead insurgents ("they put the TERROR in ‘terrorist'") against US and Allied forces in Afghanistan. Yeah, the premise of this film is so ludicrous and potentially offensive it sounds like something dreamed up by the Family Guy writers after ingesting bad sushi. But not only is it a legitimate movie, it takes itself more or less seriously (though blackened tongue does enter rotting cheek occasionally). Even more surprisingly, the fucking film works, and a fun time is had by all (well, not the victims who get their throats torn out by Zombies of Mass Reduction, because they take bites out of you and lower your density… get it? Eh, read a book!).

The fact that works is largely due to the film's lead, Canadian actor Corey Sevier. The film's costume department clearly had the same budgetary constraints as the Twilight movies because much like Taylor Lautner, Sevier spends maybe the first 30 seconds beshirted and then literally spends the rest of the movie shirtless FOR NO REASON WHATSOEVER. You'd think a shirt would protect him from the Afghanistan heat, let alone bites from cannibalistic undead former terrorists, but hey, I'm certainly not complaining. Sevier's pecs and abs spend so much time onscreen that they deserve their own separate screen credit. If Sevier ever needs a fluffer in the future, I volunteered here first.