Does that ghost have a boner or is it just scared to see us?

We're hee-eeere! That's right, Trick n' Teabaggers (hey, you celebrate your way, I'll celebrate mine), Andrei "Eli Roth's" Trostel and Gavin "Colton Haynes' Official Stalker" Pitt are back for another Teufelsnacht Tag Team of Terror. Halloweens past have seen us co-battle cinema's most comely vampires, warlocks, werewolves, and zombies. This year we're grabbing our white sheets (I stole mine from George Zimmerman—it even had eyeholes already cut out!) and harassing Whoopi Goldberg to be our ethereal go-between (much like the Oscars team does every year) as we polish our (crystal) balls and tackle the top 5 sexiest male ghosts. 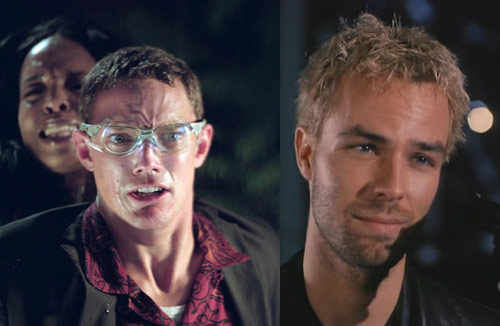 I'm kind of hedging my bets here, by including two guys from the same movie, but my reasons are sound. Lillard has a lovely body but a face that would benefit greatly from judicious application of a burlap sack; whereas JR Bourne is smoking hot but plays a complete arsehat. Between the two of them, they make the equivalent of one hot guy in this underrated film involving a haunted house (guess how many spectres it has?!) in which the unquiet undead eschew the usual sheet-wearing and occasional object moving in favor of decidedly homicidal haunting—slicing people in half, crushing people under junkyard objects and the occasional trick wall (some trick!) or chopping them into their component parts with a Mrs. Bates Cutlery Special.

Lillard plays Dennis, a medium—which I can only assume is one of those ironic dealies, as he's never medium, but completely over-the-top, as usual. Still, he's cute from the neck down, and makes a pretty ghost when he finally falls foul of the spectral splatterfest. Bourne (currently one of the few guys who doesn't shower or de-shirt every five minutes on the Teen Wolf series) plays Benjamin, the sphincter-like lawyer who brings the film's cast of victims-to-be into the house (and the ghosts' grisly grasp) in the first place, and is promptly repayed by a sudden experiment with bisect-uality.

Before he tripled in age, acting talent, and mass, twenty-something Alec Baldwin was the hottest ghost to ever populate a Tim Burton movie (though admittedly, since the only other male Burton ghosts are Christopher Lee, Danny DeVito, and Christopher Walken with no head, this is not exactly a difficult feat). In Burton's debut movie, Baldwin plays Adam, who, along with wife Geena Davis, quickly shuffles off this mortal coil and becomes "recently deceased," content to haunt their home until a family of monstrously cheerful yuppies (and depressed goth Winona Rider) move in and prompt the pair of put-out poltergeists to hire Michael Keaton's "bio-exorcist" to scare the living hell out of the living pests.

Alas, this is before Baldwin's "get naked in everything" 90's phase, but he makes up for it by being blandly cute throughout. If this film was remade today, it would undoubtedly A) star Johnny Depp and B) change Depp's character to an angst-ridden monster-with-a-heart (and possibly a musical number) in blackface, while all female roles would be Helena Bonham-Carter. 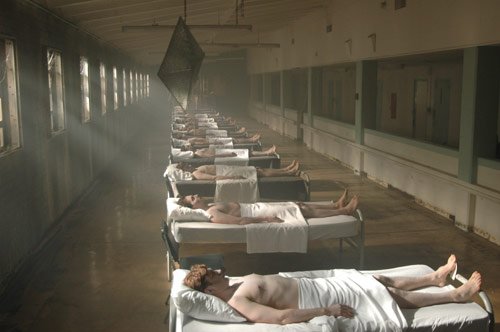 This creepy story of evil, homophobic bullies and vengeful gay spirits (the tagline might as well be "It gets better… when you feed the bigots who murdered you into a Combine Harvester") was directed by gay horror director Tim Sullivan (2001 Maniacs, Chillerama). In it, Diamond Dallas Page plays Captain Kennedy, the fascist warden of a juvenile detention center, who makes it his personal business to break the spirit (literal and figurative) of his latest inmate, the naive, innocent, and pretty (read "currency to be") David (Raviv Ullman). Already riddled with guilt over the death of his beloved older brother, David's torment calls to the restless spirit (literal, NOT figurative) of the Captain's dead son, John, who died in an "accident," which David eventually uncovers was manslaughter when Kennedy and a group of older prisoners attempted to violently "de-gay" the now extremely enraged poltergayst.

Cue supernatural histrionics that play out an awesome revenge fantasy that does for gay guys what Inglorious Bastards did for Jews. Add gay actor Russell Sams (the scene-stealing "Dick" from Rules of Attraction) as the ghostly, also gay older brother, and this is the gayest story about an angry ghost since that censored episode of Casper. 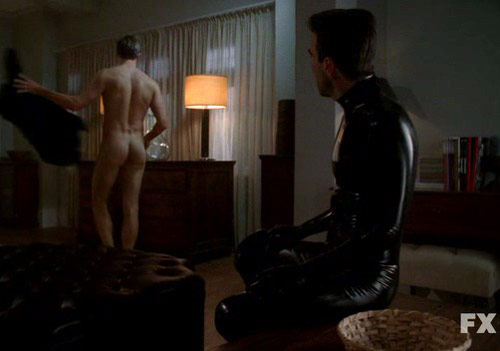 You'd be hard pressed to find a character who ISN'T a ghost in this excellent cable series, in which hot, infidelity-prone psychiatrist Dylan McDermott and his irritating, baggage-riddled family (psychiatrist, heal thy… wife and brats) make the spectacularly rational decision of moving away from the chaos and problems of the city into a nice, restful, country mansion—which also happens to be the most haunted building in the continental United States—and many of the ghosts have post-mortem stiff areas other than the traditional, shall we say. Seriously, the cheating shrink and his harridan of a wife would get more rest—and less opportunities to cheat on each other—if they'd bedded down with Uncle Heff at the Playboy Mansion instead.

Amongst the Cornucopia of cadavers that call the house home are Zachary Quinto, out gay actor and neo-Spock in the Star Trek reboot, and Teddy Sears, Olympic athlete-turned-actor (who is frequently nude in his films, possibly due to some contractual obligation from the IOC), who play Chad and Patrick, two hot young guys who have been a couple for many decades, several of them while they even had a pulse. Seems that anyone who dies in the house is bound to eternally haunt it (renters: ALWAYS READ YOUR LEASE). Quinto doesn't nude up until season 2, so we have to be content with his eyebrow action, but Sears shows off his gold medal-winning body as both Patrick and his alter-ego, "Rubberman," a sinister figure in a full body latex body suit. See? Even the dead practice safe sex! 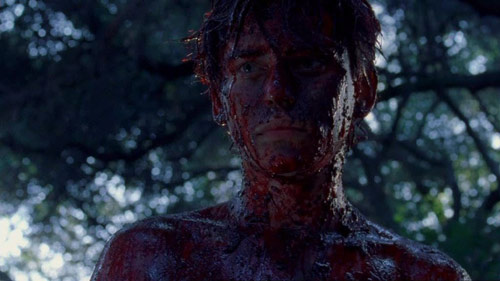 Critics aplenty hailed Jason Segel's 3-second full frontal scene in Forgetting Sarah Marshall as a new era in cinematic nudity. The Academy of Motion pictures was so impressed with Michael Fassbender's cock shots in Shame that they nominated him for an Oscar (a special, 9-inch one). These fleeting moments—and Ewan MacGregor's entire filmography—pale into insignificance compared to Rocky Marquette's… part… in the excellent Shallow Ground, in which he plays "the Blood Boy," a vengeful "composite spectre" created from the blood of dozens of murder victims, determined to get revenge on their killer (Patty McCormack, all grown up from her most famous role as the murderous child "Rhoda" from The Bad Seed) and anyone who stands in the way of their mission of supernatural vengeance.

It's a 95-minute movie and Marquette spends the entirety of those 95 minutes totally stark naked, covered from head to toe in blood. He pads around the forest, police station, and creepy cemetery after McCormack, leaving bloody footprints behind (that kill anyone who touches them), moving through impossibly tight spaces by reverting to a torrent of flowing blood, and swinging his ballsack all the while. This is one revenant that takes the term "naked fear" in a rather different direction. He may not be wearing the traditional white bedsheet, but I certainly wouldn't mind hitting the bedsheets with him—though given all that blood, you'd be doing laundry for like, 10 days afterwards. WORTH IT.