The only thing out of this world are these abs I'm fiending for.

Yes folks, it's that time of year again. Pumpkins have holes cut in them to be abused by frat boys; candy is devoured without help from children's cartoon ads; and Jamie Lee Curtis locks and bolts her doors, takes her phone off the hook, and throws darts at a picture of John Carpenter. It's Halloween, and your two favorite tricksters, Andrei "the Sort-of Giant" Trostel and Gavin "Colton Haynes' Husband (Restraining Order Pending)" Pitt, are back with more tag-team treats. 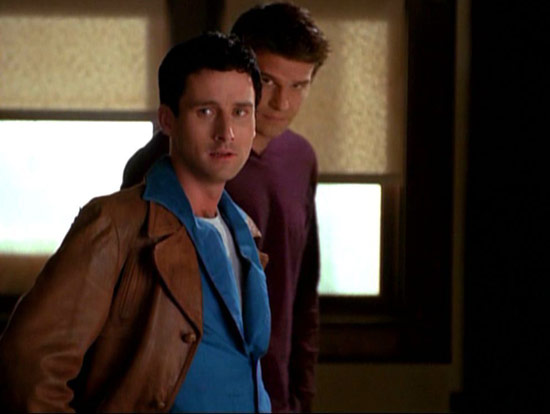 "So… want to play Edward and Jacob?"

Angel was a 90's spinoff of Buffy the Vampire Slayer, focusing on David Boreanaz' angsty, romantic, soul-ridden vampire (seriously, he's two days away tops from sparkling in sunlight). Season 1 of the series is arguably the best, due largely to the efforts of late, Irish actor Glenn Quinn as Alan Francis Doyle, Angel's clairvoyant, part-demon sidekick. Doyle was part bracken demon (bracken being a weed), which means that in times of stress he was prone to turn bright green and sprout thorns all over his body, like a sexy, ecologically friendly Iron Maiden.

The chemistry between Angel and Doyle leads to some awesomely homoerotic moments, including Doyle admitting his attraction to Angel (in the episode before he was killed off!), which caused the show to be banned in Singapore for being "too gay." The actors played up on this, too. Several times Angel's Claddagh ring (a pair of which signifies love between two people in Ireland when there are no leprechauns to bribe, and which he gave to Buffy) appears on Doyle's finger, and they are more often mistaken for a gay couple than they are for demons. Indeed, most of the "demons" in the first season also mistake them for a gay couple. There's definitely more than one kind of stake being inserted here. 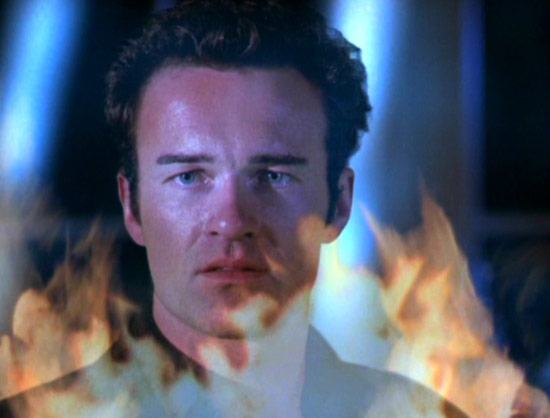 "You call this Hell? I was married to Danni Minogue."

While it started off as a televisual rip-off of the movie The Craft, this series about three sisters who were also powerful witches was not at all above weaving a plagiarism hex on Buffy the Vampire Slayer and Angel either. Nowhere was this more obvious than in the character of Cole Turner. He's a demonic assassin dispatched from the foulest depths of Hell to Los Angeles (at least he won't be homesick) to put the kibosh on the three sisters' white witchery.

In his demonic form, he's essentially a Kmart version of Darth Maul—all red and black skin patterns, and rotting, British-style teeth. A couple of times we almost see his light saber too. In human form, he's even more evil, pretending as he does to be Hollywood-based lawyer Cole Turner. Naturally, when he's about to kill the sisters, he falls in love with one of them (Alyssa Milano as Phoebe), thus starting several seasons of bargain basement Buffy/Angel-style romance—one minute he's evil and trying to kill her, the next he's nice and trying to sex her up.

Either way, he's played by Australian actor Julian McMahon (also of Nip/Tuck, Fantastic Four fame) so you're guaranteed both beefcake and ham, as McMahon's default response to being upstaged by scenery is to devour it as theatrically as possible. But hey, at least he has the good taste to be at the very least shirtless when he does it.

Subsequent seasons introduced Kerr Smith as a cop. Smith looka remarkably like a younger version of Julian MacMahon, but the show dropped the ball. Not only were MacMahon and Smith's characters unrelated, they didn't get naked and horizontal together even once. FOR SHAME.

3. Karl Urban as Harry Ballard in The Irrefutable Truth About Demons (2000) 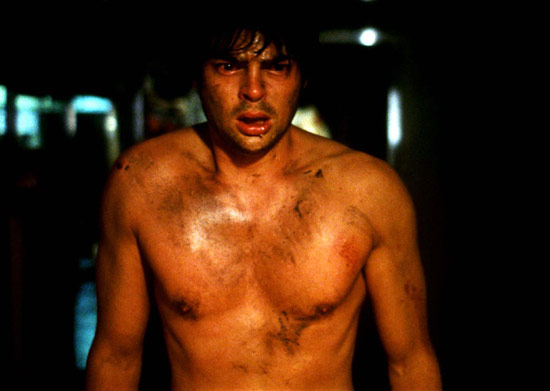 "Dammit Jim, I'm a doctor! Not one of those guys from Supernatural!"

This entertaining offering from New Zealand—known in the USA as The Truth About Demons, as apparently nobody in Iowa knows what "irrefutable" means—features Karl Urban at the peak of his hotness powers. He shot this between stints of walking around naked in a leather skirt as Cupid in Xena.

Alas, the God of Love doesn't get much of a look in during this film, in which Urban's anthropology professor, Harry Ballard, investigating the death of his missing brother (hopefully during a semester break at his college, or his anthropology students will miss their exams), discovers a vast underworld (literally and figuratively) of demons that have escaped hell and are being hidden/worshipped by a cult called the Black Lodge (not at all sinister, really—why not call your evil cult "The Puppy Factory" to throw off suspicion?). Before too long, Harry is up to his frequently exposed pectorals in supernatural shenanigans, and up to other things in a female associate (demoness) with a thing for skimpy leather outfits (maybe she had a job on Xena too).

Urban displays a Twilight-level disregard for wearing shirts throughout the proceedings, making sure that he gave many viewers boners long before he played Bones on the new version of Star Trek.

4. Layton Matthews as Morbius in Necromentia (2009) 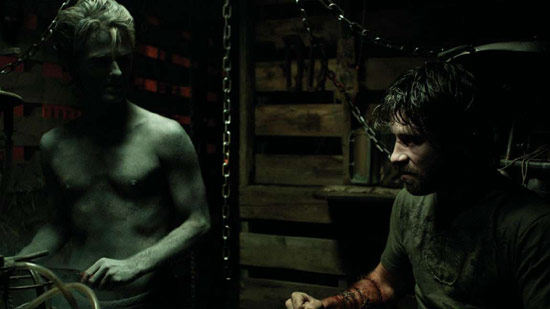 Michelangelo's David had lost far too much weight.

This movie plays like what might happen if the Hellraiser and Saw movies had a baby. The film features the inter-related stories of three people who make unsavory deals with leather-and piercing-clad demons to escape their own personal hells (note: if you are trying to escape your own metaphorical hell by invoking creatures from a literal hell, you have NO BUSINESS BEING SURPRISED when they wear your spleen as a jaunty hat).

Hagen, despite looking like he stepped out of a gay version of a Malboro ad, is pining for his dead wife and wants to bring her back (note the fine print: he said "back," not "back to life"—BIG OOPS). Travis is trying to save his suicidal younger brother from a pig-headed demon that appears to him nightly via a TV show and sings catchy tunes about how killing yourself is awesome (it's essentially American Idol with a nicer judge). And Morbius feels that he has been betrayed by those people he loves and wants to come back from the dead to take revenge (even the demons clearly find this one a little too easy to warp horribly. They're all like, "Oh come on, if you WANT us to eat the skin off your face, just cut out the middle man and ask us.")

It's with Hagen and Morbius that the film's homoerotic content emerges. Both characters are written as straight. Both characters as filmed however… really don't seem to be. Morbius, in particular, is about as believable as part of a heterosexual couple as Zac Efron and Michelle Rodriguez. When their stories intertwine, so do their bodies, as the two frequently shirtless men fight in the narrow, steam-piped corridors of hell (Hell is apparently located in either a high school basement or a sewage treatment facility). It comes as no surprise when Morbius is turned into a grey-skinned, nearly naked demon himself, and that Hagen's wife double crosses him and leaves him in hell… with Morbius… the demon that clearly has a thing for him. Is this what they mean by, "One man's Hell is another man's Heaven?" 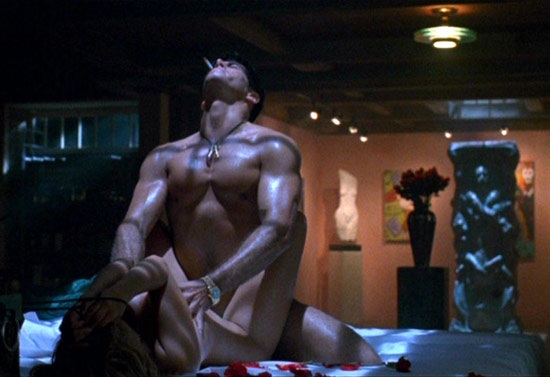 This film was the third entry in the series about a puzzlebox that opens a doorway to Hell when solved, like a Rubik's Cube with an attitude problem. It was also the first sequel made in the USA rather than England, so as you expect, subtlety goes right out the window early on (not that a film about undead sadomasochists who get their jollies by ripping your skin off can be called "subtle").

Amidst all the chain-flogging, skin-flailing and impalement by compact discs (yes, really) is Canadian actor Kevin Bernhardt as JP Monroe, as sleazy nightclub owner who gets the infernal ball rolling by installing the fossilized Pinhead cenobite as a statue for his club. Monroe is naked quite a bit in his early scenes, and even more naked in his later scenes, when Pinhead turns him into a fuck metaphor, a skinless cenobite with pistons literally pumping through his head. "Trust me… this is better than sex!"

I'll…take your word for it, Kevin.