Is that a broom in his pocket or is that witch just happy to see me?

Witchery isn't all cauldrons, eye of newt, and lesbians on Buffy, you know. Technically, a witch can be either a man or a woman, so long as they have a cat, a wardrobe consisting entirely of black, and a cackle that would shame Fran Drescher. Here then, is my list of male witches (also warlocks, sorcerers and assorted necromancers) who put the "ab" in "abracadabra." (And if you missed my last two Halloween specials, here are the Top 5 Sexiest Male Werewolves and the Top 5 Sexiest Male Vampires!) 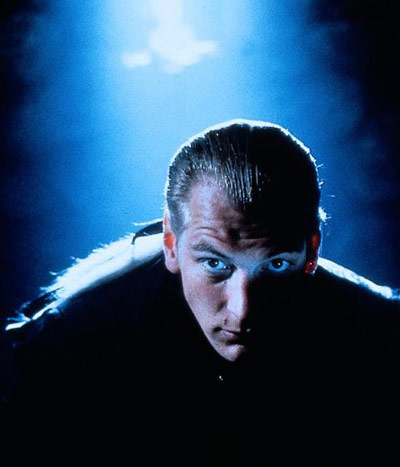 This excellent cult film spawned two sequels and helped break star Julian Sands free of the bonnets n' britches English period dramas he had been trapped in up to then. It was also the film which posed that men AND women could both be witches (a plot point somewhat cockblocked by the film's title, Warlock). Sands played the titular, nameless, evil witch, transported from the 17th century to the 1980's by Satan in order to assemble the four hidden parts of an anti-Bible that, when assembled, would spell the true name of God backwards (no, not "Dog") and un-create the universe (basically, it's a Dan Brown movie with more spell-casting, less Tom Hanks, and about the same number of evil albinos).

Sands is at his icy British best as the Warlock, whether making a flight potion from the fat of an unbaptized kid ("a witch needs no broomstick to fly, child"), giving a gay guy a disturbingly literal tongue-kiss, or putting off ending the universe by saying God's name in reverse for a few minutes to have a good triumphant gloat at the heavens. Best scene in the movie features the Warlock taking shelter in the barn of a group of Amish people, whose Old Testament lifestyle more than adequately prepares them for what to do in case of Witch.

"Dude, there are two girls behind you; Who let them into this movie?"

Enjoyably silly 2006 romp from director Renny Harlin, who started off his career well with A Nightmare On Elm Street IV: The Dream Master before sending his reputation to Davey Jones' locker with Cut-Throat Island, (a terrible film about pirates from 1995, 16 years before Pirates of the Caribbean parts 3 & 4 made terrible films about pirates' box-office gold, aka dubloons).

The Covenant‘s magic-wand thin plot is basically The Craft with cock: four young guys are the coolest thing in the small Massachusetts town of Ipswich, primarily because they are the descendants of a bunch of witches from the 17th century who made it bigger than the kid with the lightning scar on his scalp. The four warlocks are totally hot (not as hot as their descendants would have been in real life 17th century Massachusetts, what with the burnings at the stake and all), rich and popular, until the descendant of an evil fifth witch family arrives to drop a metaphorical house on their collective sisters.

The plot is nonsensical and the dialogue appears to have been written by a rabbit pulled out of a top-hat (watch me foam at the mouth as a coroner declares that one of the fifth warlock's victims was "poisoned by multiple bites from a spider, or some other insect"), but all is forgiven since the quartet of mesomorphic magicians—Taylor Kitsch (Gambit from Wolverine), Chace Crawford (Gossip Girl), Steven Strait (I hope he isn't), and Sebastian Stan (Captain America)—are universally drool-inducing, appear to suffer from the same chronic t-shirt allergy as Twilight‘s Jacob Black, and seem to indulge in school projects and recreational activities that allow them to wear the least whilst touching each other homerotically the most.

There's a sequence involving the four involved in a conference call to discuss their evil persecutor—all four guys are shown in their respective bedrooms, shirtless and in bed whilst talking. I seriously expected text to start flashing at the bottom of the screen: "Our sexy sorcerers are waiting: Talk to hot local warlocks in your neighborhood right now!" By the film's end, we've had shirtless fights in a swimming pool, a naked fight in a locker room, two of the guys kissing ("to seal a spell"—I must remember that excuse), and the evil one yelling at Steven Strait "I'mma make you my wi-otch!" And you thought that Uncle Arthur from Bewitched was camp! 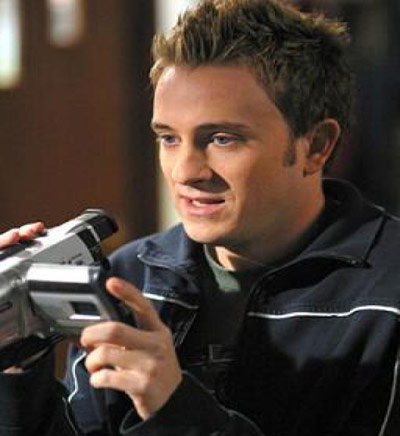 "No, Xander, kiss Spike with FEELING!"

This wannabe warlock was introduced to Buffy the Vampire Slayer in season 6, arguably the weakest season on the show (though it does give us the awesome musical episode). Andrew was initially presented as one third of the Troika, a trio of geeky teens bent on world domination using a combination of cutting edge computer technology and horrible supernatural monsters (much like Kevin James manages to maintain a viable acting career), for whom he provided the demon-summoning quotient. After getting Dark Willow unleashed on his ass, Andrew then became a tool of the First Evil, the original source of all the suffering and chaos in the universe (oddly enough, ALSO like Kevin James' acting career; someone call Sarah Michelle Gellar) before finally becoming one of the good guys in season 7.

A shy comic-book nerd, Andrew is so socially awkward he doesn't even realize that he himself is gay, despite the fact that he's clearly in love with the (uber-creepy) Warren during season 6 ("How could he do this to me? He promised we'd be together but he was just using me. He never really loved…hanging out with us"). After becoming one of the good guys, he also got much better taste in men and crushed on both Xander and Spike in season 7 ("Spike? It's you! It's really you! I thought I was holding onto false hope but I knew you'd come back! You're…you're like Gandalf the White resurrected from the Pit of Balrog. More beautiful than ever…he's alive, Frodo. He's alive!").

Andrew crossed over for an episode of the final season of the Buffy spinoff Angel and generated massive amounts of controversy when he exited his cameo by slipping his arms around two waiting supermodels (and not the version that comes with a cock) and announced "people change." Was Joss Whedon claiming that a gay man could turn straight after a good dose of Vitamin Twat?! Well no, turns out the cameo was originally written for Buffy's sister Dawn (Michelle Trachtenberg) and someone forgot to custom-fit the script to Andrew when Trachtenberg couldn't do the part. Whedon apologized to the LGBT community and Andrew actor Tom Lenk came out as gay in real life due to the incident, which saved his spot here on my hunky witches list and meant I didn't have to chain him up in the dry well in my basement. 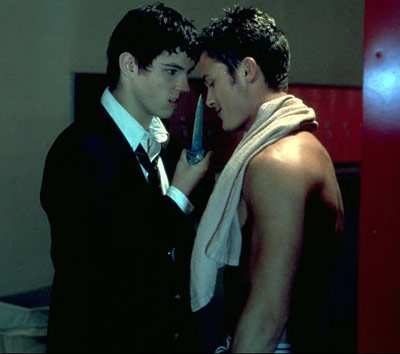 This 2001 horror film comes to us from director David DeCoteau, who has previously helmed such homoerotic hijinks as Beastly Boyz, Haunted Frat, and Boy Crazies, from the titles of which you can probably ascertain A) DeCoteau is gay, B) the only real "horror" in his films is to be found if you are a fundamentalist Christian nutjob who objects to seeing a lot of bare male flesh, and C) that Brotherhood 2: Young Warlocks (part of a 5-film and counting series) is gayer than Hugh Jackman butt-humping Zac Efron on top of Adam Lambert's piano while Sir Ian McKellan reads aloud from any of the Jacob chapters of the Twilight novels.

B2: Young Warlocks has a plot (in the very loosest definition of the word) highly reminiscent of The Covenant, in that a bunch of hot young college frat guys who seem to be studying for their BA in skimpy-clothed homoerotic touching are approached by a sexy new frat dude who charms all of them in a disturbingly literal sense—he's an evil, centuries-old witch (who obviously has one hell of a daily moisturizing regimen) with dreams of world conquest, who needs the cute frat guys from Gamma Alpha Epsilon to help him form a coven so they can become all-powerful (and all-over tanned, judging by how many of the spells seem to be performed in nothing but tighty-whities).

The Brotherhood 2: Young Warlocks – First part of the pool scene:

1. Robert Pattinson as Cedric Diggory from Harry Potter and the Goblet of Fire 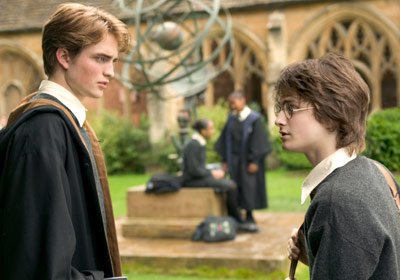 Oh come on, I had to work RPattz in somewhere; I've included him and Taylor Lautner in my last two Halloween articles and anyway, if I don't mention him, Dumbledore will personally turn up at my house to Expelliarmus my gay gene. 2005's Harry Potter and the Goblet of Fire remains my favorite of the Harry Potter series, and not solely because of RPattz (Tenth Doctor Who actor David Tennant is in it too!).

A pre-Twilight RPattz is excellent as "Hufflepuff hottie" Cedric, one of the four students competing in the Triwizard Tournament. I was delighted at how homoerotic Cedric's interactions with Harry (Daniel Radcliffe) are: the first time Harry sees Cedric at Hogwart's, Cedric is lying with his head in another guy's lap, and shortly thereafter, Cedric gives Harry a clue about the Second Triwizard Task ("You know the Prefect's bathroom? It's a great place to take a bath"), which totally sounds like a come-on (I was not alone in expecting the next line to be, "I'll meet you there in an hour; bring some lube and an extra-thick wand").

Sadly, the only time Cedric gets to lie in Harry's arms is when he's killed by Voldemort, a fact that the makers of Harry Potter are probably still kicking themselves about now that Twilight has made RPattz a superstar. I'm expecting J.K. Rowling to soon bring out a new book, "Harry Potter and Cedric Diggory's Totally Been Secretly Alive All This Time, Possibly Posing as a Vampire and He and Harry Have a Whole Bunch of Adventures That Will Lead to at Least Six More Films."