Salutations, shape-shifters! Enter and be welcome to another Tefeulsnacht tag-team between your mad Aussie Blue(-haired) Fairy and Michael Bolton's very own Mini-Me, Andrei Trostel. Last year we tackled filmdom's most beautiful bloodsuckers, and this year we're camping out in the woods and hoping to catch a glimpse of some supernatural, bestial monsters that devour the unwary, defy the laws of nature, and prefer to come out only when the moon is full. But enough about the Tea Party Movement, let's talk about werewolves.

When it comes to sexy werewolves, the balance is tipped firmly to my side of the scale. Vampires can be sexy for everybody—the straight boys have rather disturbingly literal batgirls from Van Helsing; lesbian viewers have their pick of any female vampire from a Hammer horror (seriously, if you watch 70's films, the classic symptoms of vampirism seem to be an aversion to garlic, crucifixes, and sunlight and a craving for blood and Michelle Rodriguez's phone number); straight girls have Gerard Butler in Dracula 2000 ("This… is… Transylvania!"); and gay guys have anyone in Twilight with a cock and a sparkle.

Werewolves however, are pretty much skewed towards a gay audience. Since very few lycanthropes transform with their wardrobe intact (unless they shop at the same purple jorts shop that The Hulk buys his from) a gay audience is pretty much guaranteed a naked man at some point. Let us walk on the moors, gentle reader (keep to the path!) as we find out which of these howlingly hirsute hunks has the best full moon… 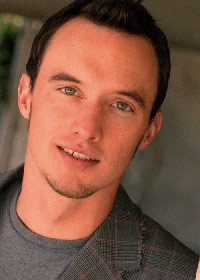 The Lair featured in last year's suckable vampires list, in that the show's entire premise revolves around both beautiful men and a coven of gay vampires running a sex club in the coastal town of Dante's Cove, meaning that there's always plenty of wood being inserted into bodies in one way or another.

Matty Ferraro joined the show recently as the character of Ian, a mysterious hitch-hiker who gets rides with lots of guys. And when he's done doing that, he gets them to drive him places in their cars. Ian is not at all shy about showing other characters or the audience how far down his tan goes, and his body is buffed, waxed, and sculpted like nobody's business. Unfortunately for Ian (and exceedingly unfortunately for his bedmates), whenever there's a full moon, Ian turns into a Queerwolf, which makes a complete mockery of his devotion to body hair depilation and takes the expression "hunk of a man" in a disturbingly literal, gastronomic fashion.

For some reason, the town of Dante's Cove seems to have more than its fair share of nights with a full moon—there seem to be about 50 of them a week, going by the average episode—but Ian's inner Wookie doesn't even need moonlight to change. Blacklights trigger his transformation (NEVER go nightclubbing with this dude) as do certain night-blooming plants; physical contact with the werewolf's kryptonite, silver (hide the good cutlery, boys!); and, oddly, mind-numbingly good sex, which means his boyfriends get it doggy-style whether they want to or not. He's the American Werewolf in Condom! 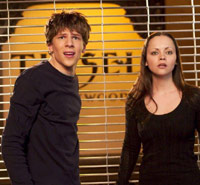 Cursed is an unfairly panned 2005 offering from Wes Craven that features Christina Ricci, her moon-sized head, and a pre-Zombieland Jesse Eisenberg as a brother and sister who fall afoul (and abite) of Big Bad Wolf Joshua Jackson (clearly six years of Dawson's Creek was enough to snap his hold on sanity) and who spend the rest of the film NOT transforming into werewolves. Oh, they sprout fangs and claws here at inconvenient moments, are super-strong and boast "unnatural sex appeal" (I hear that's the title of Justin Beiber's next album), but they won't actually do the whole full-body fur-coat thing until they've both "submitted" to Pacey's penis.

Eisenberg is seriously the hottest thing on two (and occasionally, four) legs in this film. His sexual allure basically involves trading in the Jew-fro for a skater cut and finding himself naked in odd places: the doghouse in his backyard, the coyote exhibit at the zoo, my bedroom when I'm watching Snoopy Come Home.

Also falling for Jesse's Semitic sexiness is Milo Ventimiglia (Heroes) as the closeted captain of the school football team. Whilst not a werewolf himself, Bo is certain that between the two of them, he and Jimmy can make the Beast with Two Backs. The film gets major gay kudos for having Jimmy react calmly to Bo's interest in finding out which way his tail leans, and even suggests that the two of them might eventually be more than friends. Take that, Teen Wolf! 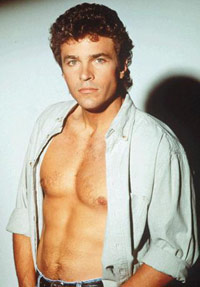 This 1987 series from the mind of the great (and recently Late) Stephen J. Cannell (The A-Team, Greatest American Hero, 21 Jump Street) is basically The Hulk with fur, or perhaps The Fugitive with a one-eyed man instead of a one-armed man.

My very first ever man-crush, John J. York (you know a guy is hot when you'd still do him even with 80's hair), plays Eric Cord, a young man whose dreams of becoming college valedictorian are shattered (although I guess he could still enroll at Sunnydale U) when he nearly becomes Alpo after his best friend makes an inappropriate advance of the suddenly-sprouting fangs-claws-and-muzzle kind. (Hilariously, when the two hot young roommates are fighting each other, one wolfs out and tries to eat the other one with much banging and throwing of furniture, and their landlady bangs on their door with her walking stick and yells, "What are you two boys doing in there?! I hear bed springs!")

On the run for murder after giving his best friend a silverectomy ("I had to kill him because he was a werewolf" was not really going down well in most courtrooms, outside of being involved in a hit and run with Alec Baldwin or a shiving with Robin Williams), Cord can only free himself of his monthly trip to Big Bad town by finding and killing the Master Werewolf that started the bloodline, Janos Scorzeny (50's cowboy movie stalwart Chuck Connors, who goes beyond merely chewing the scenery to coating the entire set in lube and making it his bitch), a werewolf so ancient that part of his body (his right eye) remains permanently transformed into lupine form, requiring the judicious application of an eye patch to make him look LESS suspicious. Each episode follows Eric's attempts to track Scorzeny down, with varying degrees of success; he occasionally finds him (and gets his pretty ass firmly handed to him on a platter each time), but more often than not he ends up facing the monster/psycho of the week instead. Each episode also features Eric waking up post-transformation completely naked, in a plot device that a) often stretched the limits of how much male nudity could be shown on television and b) made the little kid version of myself feel funny in his pants. 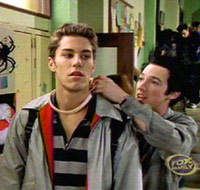 I can say without hyperbole that this early ‘Noughties Canadian TV show is "The Most Homoerotic Program Ever Created." This comedy supernatural program is so loaded with gay subtext that it makes Queer as Folk look like Mel Gibson's Passion of the Christ (the director's cut, with 230 minutes more anti-Semitism and a visibly drunk Pontius Pilate telling Judas Iscariot to shut up and blow him). If you tried to come up with some kind of Big Wolf on Campus drinking game for every time the two male leads exchange loaded glances/dialogue, touch each other, or hold hands, you would be dead of liver failure before the first commercial break.

Canadian beef cake (moose cake?) Brandon Quinn plays Tommy Dawkins, a high school football captain who gets the prerequisite werewolf bite (seriously, all these guys get turned by a bite?! Why not vary it a bit and have them turned into werewolves by a roll in the hay? Or sharing drinking straws? Or karaoke singing Warren Zevon's "Werewolves of London"?!) and who has to turn to his boyfriend best friend, relentlessly chipper, and cheerful goth Merton Dingle (Danny Smith) for help. (Yes, Merton is a goth who has the wardrobe down pat, but seems to have forgone the whole sullen, misunderstood pessimist thing—he's like Edward Scissorhands on an ecstasy binge). Resigned to the fact that once a month he becomes a supernatural creature with a frankly alarming resemblance to a young, hirsute John Travolta, Tommy teams up with Merton to fight evil and heterosexuality in equal measure.

Whilst tackling such rather inept monsters of the week as a homicidal imaginary friend, a soul-stealing octogenarian who runs a mobile book library, and the ghost of an undead "attempted strangler" (he suffered from Carpal Tunnel Syndrome), Merton and Tommy are routinely mistaken for a couple by everyone else in school (they're mentioned as such in the yearbook!), hold hands at least once an episode, attend the prom together as each other's date, and get in extremely difficult-to-explain scenarios:

(Tommy is in a bathrobe)
Merton: C'mon Tommy, it's for Science!
Tommy (starting to disrobe): Do you have to measure EVERYTHING?!

I have my doubts that the people at Fox ever actually watched an episode of this, or their heads may well have exploded. 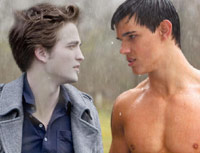 Oh come on, don't look at me like that. I pretty much had to. I mean have you seen any of these movies? He wears a shirt for the first movie, and for about twenty minutes of the second one. Then at about the 21-minute mark of New Moon, he takes the shirt off, and seriously doesn't put it on ever again, for the remainder of the series. Based on the amount of time Taylor Lautner's bare chest and stomach is on display in the second and third movies, you'd be forgiven for thinking it wasn't silver, but rather black cotton t-shirts that caused a fatal allergic reaction in werewolves; and that Taylor's torso deserves its own screen credit.

I've never read the books (and don't intend to, save at gunpoint) but I love watching the movies; not only are RPattz and Taylor Lautner both fucking gorgeous, but they both spark off each other wonderfully, in a homoerotic fashion. Twilight: Eclipse had a climactic tent scene between the Bedazzled Bloodsucker and the Latent Lycanthrope that was just as homoerotic, and arguably more romantic, than the one in Brokeback Mountain—and unlike that film, Jacob and Edward both got to have a pulse at the end of their film (well okay, not Edward, but he didn't have one at the beginning either; work with me here, people!).

I must admit that I am an avid reader of Twilight slash fiction involving Edward/Jacob (straight guys, if you don't know what slash fic is, ask a woman who works in a comic book store or who has a LiveJournal account). Edward and Jacob are hot, the fic gets them running off together after dumping the annoyingly narcissistic whiny bint, and the idea of Edward and Jacob in a gay relationship pisses off both tweenage girls and Mormons simultaneously. It's win-win!!