The 5 People You Meet at a Harry Potter Premiere

Every year these folks risk social rejection to profess their love.

Harry Potter: A popular children's book series that instantly morphed into a worldwide epidemic in the late 1990's. Magical powers are no longer a figure of our youth's imagination, and flying can now be achieved by using simple household cleaning appliances. The young and old, the sane and insane, are united as one astronomical, slightly frightening cult, at the Harry Potter midnight premiere.

You may try to deny it, but there's a bit of a geek in all of us when it comes to Harry, Ron and Hermione. Nevertheless, one may find that "a little bit geeky" is a massive understatement when referring to a Harry Potter midnight premiere. We're talking a 100%, full-blown geek-a-thon that makes a death match between Edward and Jacob lovers look like a bona fide tea party.

The Mockers are the ones sporting aluminum foil helmets, Captain Spock ears, and screaming "may the force be with you" across the theater. I'll admit it, I've been to my fair share of Harry Potter book and movie premieres, donning the infamous lightning bolt scar just above my right eye, waving around my eBay wand that lights up on command (it's awesome, don't judge), but even I leave the movie feeling a tad more sane than when I came. The characters you meet at a Harry Potter premiere are a one-of-a-kind bunch that risk social rejection each year to pledge their undying love to a fictional character. To be honest though, these people are half the entertainment.

These devoted groupies will be the non-showered, slightly smelly, scuffed up bunch chugging coffee and energy drinks at the front of the line trying to stay awake long enough to watch the whole movie. They've been freezing/sweating their asses off outside the theater for the last 40+ hours, trying to ensure they get the best seats in the house. They will be sleep-deprived, they will be temperamental, and there's a 50 to 1 chance they will be armed with some form of weapon to fight off anyone who tries to cut them in line.

2. Members of the Quidditch Team 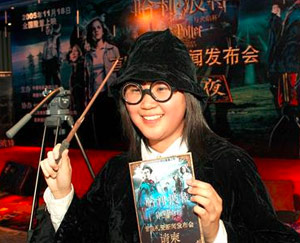 This brain is REAL. Please take my advice on this one… proceed at your own risk. Seriously, no sudden movements, never make eye contact, and stay at a broom's length away. Don't be alarmed when they decide to do a Mighty Duck V-formation through the movie theater with a broom between their legs, just get the hell out of the way. They are safest to approach when actively quizzing each other on Harry Potter trivia in the corner but don't even try challenging them to a duel. You'll lose.

Who is this guy? Is he waiting for his wife? His daughter? His other lonely middle-aged friends? Who knows! But he set up camp with enough movie theater snacks to make it seem like he's waiting for a small third world country. He laughs louder than everyone and sheds more tears than a widowed woman reading Nicholas Sparks, but he's the first to throw popcorn at the person who forgot to put their phone on silent so he's welcome in my book.

In my opinion, these people are awesome! They'll be the ones sporting aluminum foil helmets, Captain Spock ears, and screaming "may the force be with you" across the theater. About 75% of them actually do like Harry Potter, but are either A) too embarrassed to it admit it, or B) want to piss off everyone else and start a freak riot. Either way, I'm glad they show up. The whole premiere experience is far more enjoyable when they're around. 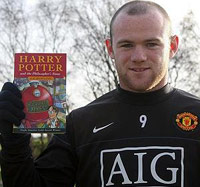 Rooney READS??! Oh wait, that's just the cover. No wonder he's at the movie.This is where the majority of fans fall in the premiere mixture. We've read all the books (more than once), seen every movie, and genuinely look forward to sharing our love for Harry Potter with everyone else in the theater. Why? Because for this one night, we don't have to be college students anymore. For this one night, it's okay to be "a little bit geeky." We've watched this story of a lanky boy from Privet Drive come to life for the past 10 years and can't help but feel like we share the excitement, fear, and joy along the way. "Harry, you my boy!" was shouted across the nation when he got his first kiss, and audiences broke into a roar when Professor Umbridge was carried away by Centaurs. Chills travel up every spine when the first few notes of the theme song are blasted through the speakers and we're not afraid to admit it. Yeah, I fall into this category if you couldn't tell. But if that means that I don't have to grow up quite as fast as the rest of you, I'm okay with that. And for those of you that share my HP passion, I'll see you at the July 15th premiere!