Help, Babies are Stealing My Friends!

One day in the near future you will wake up and all of your friends will have babies. Facebook and Instagram will be flooded with baby pictures of small feet and tiny hands and first everythings. First teeth (cute), first smile (cuter), first living room diarrhea explosion (unfollow). You can do two things: join in for the swim, or drown every time you open Facebook again at the office.

This is incredibly selfish of me to say. I know this. BUT, these bundles of joy have stolen vacations, weekend getaways, and late nights out that were rightfully mine and their parents' (my friends). Who I miss hanging out with and won't see again on the regular until their kids graduate from college—thus starting the cycle over again.

It feels like I'm on a dock manically waving my arms as they all board the baby cruise, screaming at them, "Wait! Wait! Wait!! We haven't gone to New Zealand yet! We're supposed to sneak into a Playboy Mansion Party! We still have time to make hilarious memories together!" But they don't hear me. They're blinded by teensy-weensy outfits and exchanging tips on proper swaddling methods. They're blinded by the jubilance of making a little person, and no trip to the Southern Hemisphere can compete with rolling your kid into a snuggly soft burrito. 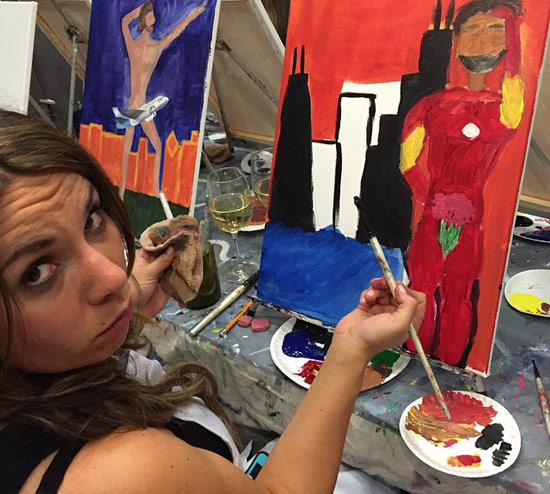 Farewell, friends, I will just paint my own superheroes now.

If there's a baby in Vegas it better be able to do lines like the rest of us and not cry about it.It's selfish of me to think that people should put their lives on hold until I'm ready to go down this child journey with them. It makes me sound severely codependent, but that's not it at all. It's more of a desperate desire to create memories together before they develop a routine that settles them in for the next twenty years. My parents had only one kid and their Saturday night lineup was Golden Girls, Empty Nest, and Father Dowling Mysteries (for you younger generations, it was a 90's crime show where an old priest and a sassy nun solved murders around Chicago. Horrifying as that premise sounds, it was pretty popular. With that said, why don't we all take a brief moment to tweet Shonda Rimes for inventing a series of shows where the main characters haven't taken a vow of celibacy). Even as a child I thought a weekly televised geriatric event and cheese-less pizza couldn't possibly be one of the perks of being an adult and my parents were doing it incredibly wrong.

It's also scary because I'm the only one in my group who feels this way. Everyone else loves the baby and nobody find this sketch hilarious…..

They used to be.

That's not to say I'm not the perfect person for when my friends need a night off. My weekends are packed and there's always a shitty movie premiere to sneak into or some beach party to crash (if you're thin and pretty enough you can get into any LA party). But that's my role in their life now. The one they call when they need to stick their foot back into the pool of fun and hope they can stay afloat…and by afloat I mean stay awake 'til 10:30pm.

Maybe it wouldn't be so bad if parents could just leave the baby at home. How hard is it to find a sitter? Don't grandparents love that baby shit? You don't have to bring the baby everywhere, then expect your friends to hold them while they're trying to drink their goddamn mimosas. I can't believe I have to say this but here it is: Babies don't belong anywhere where there's an open bar. Babies do not belong at weddings, high school reunions, or Vegas. If there is a baby at a wedding with an open bar, at some point it's gonna get dropped on its head by whatever friend got suckered into holding it then began the Marcarena. If there is a baby at a high school reunion it will be "misplaced" in the coat closet the entire night. If there's a baby in Vegas it better be able to do lines like the rest of us and not cry about it. That town better get its shit together because last month I saw more babies on the strip than I did exposed breasts. Let's go to FUN ADULT LAND and go on WILD ADULT ADVENTURES and WEAR GLITTER BODY PAINT… and while we're surrounded by SEX AND FUN, someone please pass little Grayson his sippy cup so he hydrate.

My boyfriend has 10 nieces and nephews. TEN! I love them all, but when they ask me which of them I love the most, I point to the ones that are potty trained. Truth.

It's best to give yourself a limit on how many baby showers you go to now. After going to 30 wedding showers I've limited the baby showers to three. THREE. This is all I will be able to manage in my entire life. I won't waste a full Sunday smelling candy bars in diapers while eating cucumber sandwiches. Shit, I'd love to go to a baby shower a month after the kid is born. That would be the shortest and most efficient baby party ever. Post baby shower is where it's at! The parents are too exhausted to open gifts so they come unwrapped and ready to use. Mom's got her tits out pumping so it's too awkward for anyone to eat. Dad's only interested in loaning the baby to whoever wants it so they can take a nap. "Here's the baby and our Netflix password, we're taking some Z-Quil and going to bed. There's some stale Triscuits and cold pizza in the fridge so help yourself. Thanks for coming, see you in eight hours."

They say it'll be different when it's my own kid. That these sentiments are from a naïve thirty-something who will change her tune when it's her turn. That she'll start a mommy blog and put up her mommy recipes and tell the internet about the time her baby got into the chocolate laxatives and started a literal shit storm. But I can promise you it won't be any different, because my kid would be in a coat closet somewhere 20 miles north of Vegas.

Related
15 Printed Onesies Worn by Babies Who Will Eventually Struggle to Move Up Maslow’s Hierarchy of Needs
Joshua Benjamin
Help, My Life Has Become a Backdoor Pilot!
Brendan Smith
We Must Remember Gulak the Baby-Eater as a Patriot, Not an Eater of Babies
Harmony Cox
An Alien’s Guide to Caring for Human Babies
Declan Cross
Resources