Take Your Eyes Off Twitter and Do Your Fucking Lifeguarding Job!

Children could be drowning, old people could be pooping!

A new problem is on the rise in this techie world of ours: lifeguards texting at public pools.

Yes. It’s a boring job. Being a guard at a public pool is not like the glory of Baywatch. You don’t get to drive around in a cool dune buggy paid for by the county, you don’t get to run in slow motion, you don’t even get to save anyone. In all the laps I’ve done in public pools, I’ve never seen a real-life rescue. I hear real drownings, the ones off TV, are quite subtle. Perhaps I’ve “missed” a few, in which case I’d make a crummy guard who shouldn’t judge, but I digress…

Even though it’s boring and only pays minimum wage, lifeguards shouldn’t text while working! It just doesn’t look good, plus, a person like me could drown just seeing something like that!

We all know it’s a shitty summer job that only appeals to middle schoolers who aren’t even old enough to do it. We know it’s a waste of time because no one drowns in pools unless it’s in their backyard under suspicious circumstances. We know they’re only doing it because their parents or spouse are forcing them to due to the lousy economy. But to text while On The Chair tells the pool occupants that you don’t give a rat’s ass about them and, though that may be true, it’s not something I care to see. 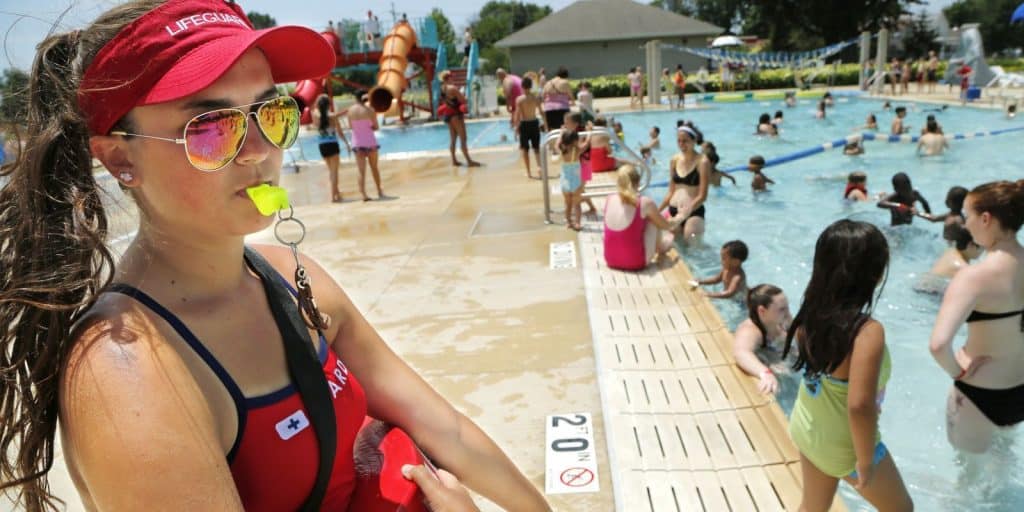 You're bored and poised for the inevitable non-disaster, just the way it should be.

What about the poor innocent chillin’ (children)? They’re the main drowning statistic. Who’s gonna watch them? Certainly not the parents. The parents are busy texting. The “Buddy System” doesn’t work with kids. You put two children together in a swimming pool and within five minutes one will be trying to drown his “buddy.” Plus, who’s gonna look out for those who are watching them whom we don’t want watching them? Those bastards are out there too. Pools are like strip clubs to these heathen: they may look like they’re just there to do laps, but who’s to say what they’re watching with their heads underwater.

What about the old people? Whenever one of them poops in the pool it’s the lifeguard's job to blow the whistle and get everyone the hell out. How many Caddyshack chocolate bars will be floating around in my face before the “’guard” finally looks up from “Facebook”? It’s disgusting, I tell you. You can’t say anything because, as just another swimmer, you don’t have the authority, and a lot of these old folks can be quite loud and argumentative. When they get irate there’s a good chance more “chocolate” will be lost and a very good chance it will be “melted” and come with a side of “lemonade.”

There are people who swim with heart conditions, people with epilepsy, diabetes, blood embolisms. They need to be looked out for. There are the intellectually handicapped, the physically handicapped, the morally handicapped who gawk at babes underwater. Who’s going to keep an eye out for them? There are all kinds of issues going on, from people sneaking in booze, to lost kids, both above and under water.

Some of these “public” pools charge up the ass for “membership.” Close to 100 bucks a month. You’d think you were swimming in the Cocoon pool or something. If they’re gonna charge that much, I want something for my money. I want to know how my breaststroke kick is doing and if I should kick my legs more on my butterfly. Plus, who’s gonna time my intervals?

Dammit I’m paying for this place, and even if it’s only a $1.50 day pass, I still want some service! It used to be these “lifeguards” were impromptu swim coaches. They used to be so bored to death they were happy to give out free advice. But then the Twitter demon emerged. Get your face outta Twitter or email or whatever and pay attention. Am I losing weight? I wanna know!

This is a slippery slope that must stop. If we have pool lifeguards texting or playing Pokémon Go (hey, come back here) what’s next? Air traffic controllers texting? Linemen texting? Presidents texting? The ISIS is sure to take over. The Muslim extremists are all about returning to the 7th century, and if they attack while we’re texting, they’ll be no more texting, and that would truly be the end of the world as we know it!

As they say on Baywatch, HELP!

Related
I Apologize for the Clown That Was Juggling at Your Grandfather’s Funeral
Kurt Zemaitaitis
Suggested Reading for Your Not-Woke-Enough 6-Year-Old
Adrian Davidson
Thank You for Your Support, from President of the Galaxy Elon Musk
Tyler Peterson
How to Write About Your Anxiety Instead of Actually Dealing with It
Daniel Kozuh
Resources