My Illustrious Time in a Maximum Security Prison (Thus Far)

It's only been three days, and I'm having the time of my life!

Oh my god, this is so much fun!

To start, I just want to give a BIG thank you to the Norton family at 727 East Lake Drive, Denver Colorado 80202, for calling the cops on me when you found me with all of your belongings in my duffel bag. Sure, I really wanted all your jewels and expensive electronics (I’ve wanted an iPad since 2010, and I really thought this would be my chance), but this is so much better. I’ve only been here for 48 hours so far, but I cannot wait for the rest of my two year sentence. Good thing I had such high-powered rifles with me, or I may have never got such a perfect sentence!

Okay, let me start from the beginning.

When I arrived at my new six foot by eight foot home, my Proomie™ (prison-roomie) wasn’t there.

I arrived at the glorious Administrative Maximum Facility (Denver’s only maximum security prison, lucky me!), and was in awe. To put it into perspective for you, the facility is nicknamed ADX Florence! Florence! Do you know how beautiful Florence, Italy is? Well, I do, now. So, I pulled up on the big bus full of other fresh faces. The door of the bus opened, and a big, strong guard planted his foot in the middle of my back and sent me flying to the pavement just beside the bus. Wow, my first example of prison abuse! I wasn’t even here for a full minute yet, and I already felt like “one of the guys.”

So, they sent me inside to see my new home and new roommates. As I walked through several gigantic fences designed to keep me in (and coyotes out!), all my future friends who were already in the prison yard began screaming obscenities and threats at me.

“I’m gonna fucking kill you when you get in here!” a tattooed man screamed.

“You won’t survive the night, you little shit!” another tattooed man screamed.

“I’m going to remove your organs in your sleep, put them on ice, pay a guard to sneak them out of the prison, and get my sister to sell them on the black market!” a man without any tattoos screamed.

When I finally reached the inside, I had a wonderful surprise waiting for me. I was ushered into this cramped but not private room where I was told to strip. It was at this point that I received the most thorough and romantic cavity search known to man. It had everything: eye contact, rubber gloves, a sexy amount of assertiveness, and most of all, a series of guards all watching and waiting for it to end, so they could take myself, and the other 12 new inmates being searched with me, to our cells.

When I arrived at my new six foot by eight foot home, my Proomie™ (prison-roomie) wasn’t there. The guard said he was probably still put in the yard, and to shut the fuck up and stop talking so much. So, I just took a seat on my king-sized bed (ha, that’s a good ol’ prison joke. It’s more like a cot!), and waited for my new best friend to come back. 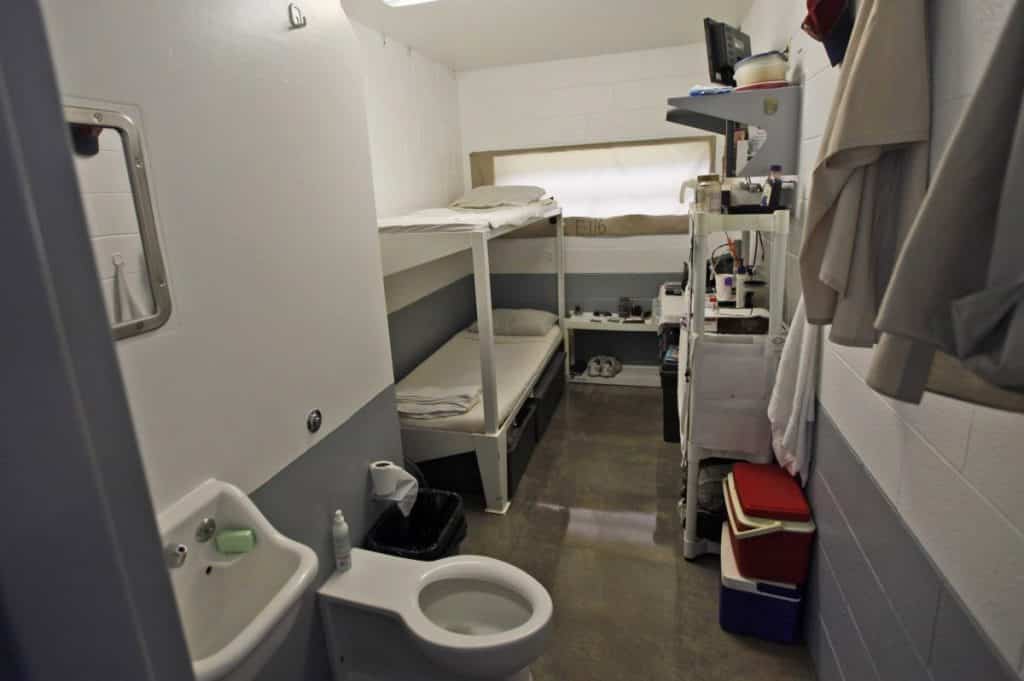 Surprisingly, taking a dump in front of others came very naturally to me.

I waited for what felt like hours before someone finally approached my cell! It was a guard!

“Your roommate got stabbed out in the yard earlier. He died. We’ll reassign your cell in the morning,” he said in a way that wasn’t gentle at all. “Oh, and stop fucking asking all the guards who pass by if they’ll be your friend. It’s creeping us out,” he continued. The guards are so cool here. They’re not afraid to joke around with the inmates like that!

The universal words of my mother’s favorite restaurant rang through my head. “When you’re here, you’re family.”

“Sure thing, buddy!” I said, with a wink. I don’t know if he said anything else, because he smacked me with his nightstick through the bars, and I fell asleep immediately. It was good to be able to sleep right through my first night in jail though! Everyone said the first night is the toughest. I guess they were just being babies (kinda like the way I slept).

The next day was a lot of “getting with the program” and “learning the routine” and “trying to make friends.” I met my new Proomie™, and we hit it off right away. I walked into his cell, said “hi,” he embraced me, I felt the cold steel of his handmade shiv go directly between two of my ribs, I started bleeding, fainted, got sent to the infirmary, and woke up good as new!

“How ya feeling?” the doctor asked.

“Never better!” I started, “I’ve never been hazed before. That was a thrill!”

He told me to stay out of all the other prisoners’ ways, talk less, find myself a weapon (which I thought was super good insight from the prison doctor), and to get back to my cell.

When I got back, my best friend and cellmate (who I’m now realizing never actually told me his name) wasn’t there. Just me again! I sat back down on my bed, and looked at all the pictures he had of his friends and family from back home that were taped to the wall. I looked at his half of the cell, pictures adorned along the cracks in the brick, and then at my side—bare. I felt so jealous! I didn’t have any pictures yet! So, I took it upon myself to take a few of his pictures, and hang them on my side. The universal words of my mother’s favorite restaurant rang through my head. “When you’re here, you’re family.”  I figured that when he got back, I’d just tell him that my family is his family, and his family is mine, and we’d be all square.

Then, a shadow loomed over me. I couldn’t wait to turn and tell my Proomie™ what I’d done with his pictures. When I turned, though, it was another guard!

“Your roommate stabbing you was his third offense. He’s in solitary indefinitely. We’ll reassign your cell in the morning,” he said, disappointing me to no end. Just when I thought I was connecting with someone, he got taken away from me!

Someone once described prison food as “shit,” so I was just super excited to find out that it was not literal shit.

So, after the trauma of being abandoned by my Prestie™ (prison-bestie), I decided to go to be early tonight, and sleep off my sadness.

I still have really high hopes, though. I’ve only eaten at the cafeteria twice so far (all the other meal times I was either unconscious or in surgery), and it was good! Someone once described prison food as “shit,” so I was just super excited to find out that it was not literal shit. 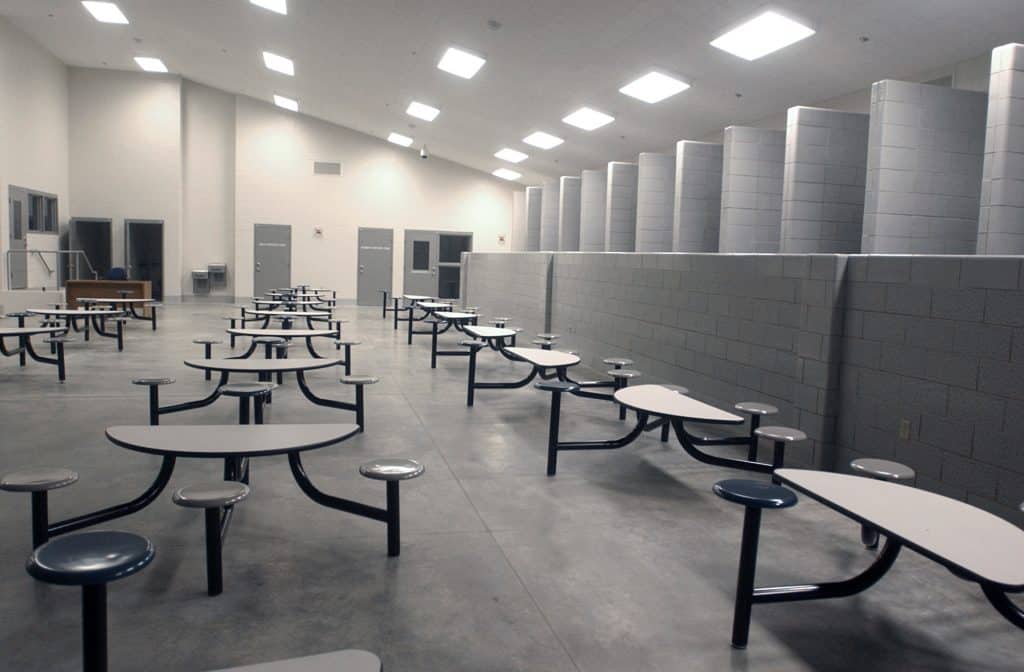 Such an open, modern feel!

I met my third (and final?) cellmate this morning, and he was extremely tough to read. He spoke to me in a very polite and genuine way that felt very condescending. I just hope that he doesn’t think he can bully me because I’m the new guy. He should take notes on how everyone else has been treating me—like one of the guys!

I’m getting assigned a job later this week, and I’m really hoping for something exciting, like being the prison chemist or sous-chef or maybe even being promoted to a guard!

All-in-all, these first few days have been spectacular. I’ve learned so much, made and lost friends, gained literal and emotional scars, and I’ve already really grown as a person. These next 728 days will be a breeze.