Every time a young horny white male shoots up his school, the nation rejoices in the hopes of finally putting into place common sense gun laws. Fortunately for us, the excitement is usually stopped short by the kill-joys at the NRA, as the American people come to their senses, while large segments of Congress come to the realization that they too may someday be victims of loading an illegal handgun into their baggy sweat pants. Always representative of the will of the people, we can't really fault our government for the flawed but well-meaning logic of the NRA. So let's take a look at what inspires such a blind allegiance among a membership that should really be better at seeing straight.

Let me do the honors, Wayne. Individuals—a lot of them—have been sacrificed so that a future dictatorship may be brought down by an armed populace. It sounds rather quaint and even agreeable, and as proof of where an unarmed citizenry will lead, the NRA always trots out the example of Hitler, who confiscated all guns upon gaining power. Whether or not anyone in the NRA has ever read a book to determine the validity of the claim, let's entertain a Germany in which the multitudes opted for a six shooter in their sweat pants over loaves of bread going for just around 6 million marks.

Cuba would qualify as a successful armed uprising but the NRA would forgo the free healthcare thing before citing this. Okay, I'll be generous and give 1 million Germans their guns to act as a check against their government. In this corner, Nazis were ruthless, motivated, and most importantly, organized—the populace (as even the learned historians at the NRA would concede) is not, though. It wouldn't have mattered how many angry German cowboys you've got running around, they'd have been wholly insufficient in the face of a force that was soon to bring Oktoberfest to most of Europe, Northern Africa, and Russia.

Additionally, it almost isn't even worth mentioning that this population elected its government, stood by as millions of fellow Germans were hauled off in cattle cars, and if their gun owners were anything like our xenophobic right wing slingers, they were probably the first to surrender their weapons to a crowd that was speaking their language like never before. 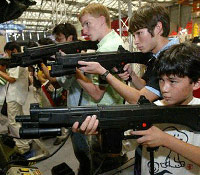 We are, we are… the youth of a naa-tion.But we can only speculate, so let's take a look at revolution in the real world. Even though I generally frown upon radical Islamic revolution, and it will probably put me on some terrorist watch list, I think the overthrow of the shah in 1979 demonstrates how revolutions can come to pass. Generally, public frustration reaches a critical mass, people take to the streets, and the military refuses to fire on the crowd to uphold a discredited system.

Armed with their Muslim bibles and burning American flags (an issue for another day), the Iranian people got the shah off his peacock as he gathered his goat and ran for his life. For more of this type of thing, see Russia 1917 and 1991, the Philippines in 1986, and all of Eastern Europe in 1989.

Of course, Africa seems to have no shortage of gunplay to fuel the armed conflicts that have gone on since the 1960s. So much for my premise, but then again there doesn't seem to be a happy ending anywhere within our attention span for this beleaguered continent.

Cuba would also qualify as a successful armed uprising but I'm certain that the NRA would forgo the free healthcare thing before citing this example in their cold dead hands. Conveniently, they might say, I'm leaving out our own revolution, but that seems more a war between independent nations with standing armies rather than random pockets of resistance on this side of the earth.

Finally, the events of Tiananmen Square point to an uprising that went down in flames without access to any firepower, but could a few angry students with guns have toppled the communist state in between study breaks, beer and bong hits? (Yes, bongs. They didn't hold the Opium Wars here for nothing.) Otherwise, I think it's pretty safe to say that the shooting that mattered most, as a solitary student faced down a tank, came from a camera, and resulted in a fairly successful shift from strict communism to a better brand of Chinese Capitalism.

Unfortunately, as they've made their bones selling lead paint to our kids, China has stepped up into ownership of America. On the bright side, maybe someday they'll own the rights to the Second Amendment and at least make a better argument that allows us to go on killing ourselves in the hypothetical name of the something that actually matters.

You have a variety of choices at Walmart when it comes to American singles—except the ones locked inside the trailer.