The Beginner's Guide to Jail

11 things you need to know before you go to jail for the first time.

I‘ve really outdone myself this time. I have been to prison. Locked up in the Big House and held down by the Man. Do not pass Go. Definitely do not collect $200. That's right: go directly to jail.

It's odd, because jail is normally something you look at from afar while driving obscure highways in Texas or while watching inmates being interviewed on gripping episodes of A&E's Cold Case Files, and think to yourself, “Wow, that looks pretty cool…in a thank-god-I'll-never-be-there kind of way.” Well let me be the first to say: it's pretty cool up-close too!

In a thank-god-we're-all-in-here-for-misdemeanors, minimum-security sort of way.

But let's start from the beginning, shall we?

I would be lying if I said I didn't start mining for comedy material the moment the officer secured the handcuffs behind my back. I immediately began concocting escape scenarios in my mind, thinking what Harrison Ford would do if he were in my position. I found a lot of little things that kept getting in my way though: the rear doors to the police car were locked from the inside, there were no train tracks in sight, and the handcuffs were a little too tight for my liking…I guess you get pampered by the whole “playful handcuff factor” in the free world.

I then proceeded to do what any reasonable, falsely-accused detainee would do: attempt to figure out why the hell the man with the prosthetic arm would fucking frame me like that! I racked my brain over and over but I couldn't find the link. Then I thought a little harder and I couldn't even think of a man with a prosthetic arm. Then I remembered I was arrested for public intoxication—the very GOAL of an average college student every weekend. Then I looked behind me and found the links…all neatly lined up, holding my hands together. 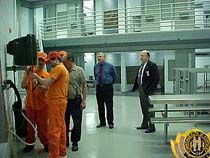 So, after spending roughly 8 hours at the city jail—6 of those in general population (D-Block to be specific)—I have learned a great deal about the place Martha Stewart now calls home. Though the rent and food is free (unless you count the tax dollars I've paid up to this point), it's not a place I recommend staying for any length of time. It's also not the nightmare you might imagine…if you follow a few basic guidelines.

And now, as my civic duty to those of you living life on the fringe, or otherwise planning on jeopardizing your freedom, I present The Beginner's Guide to Jail.

Sure, jail seems like the worst thing that could happen to you, but it could be worse. Remember the time your girl/boyfriend caught you cheating? That was pretty bad, right? Jail is a lot more civilized. Nobody's going to yell at you, slap you, or threaten to withhold sex (believe me on the last one). Rest assured you'll eventually get the right to a fair trial, not an arbitrary condemnation and a big “fuck you, we're through.” The justice system still has faith in you! Just try not to rest assured overnight…all prisoners are treated equally until your trial (this isn't the kind of equal treatment you want).

2. Forget about anything you brought besides a positive attitude.

The police officers will confiscate everything on your person, except for your clothes, the moment you enter the jail. Ever felt naked without your cell phone? Prepare to get violated in jail. Read on.

3. You aren't limited to one phone call.

That being said, the jail always gets the last laugh. Shit, I must have used the jail phone about 125 times…with a success rate of 0.05%. You see, collect calls don't work on cell phones, and collect calls made to local numbers require the receiving party to setup a credit card account with GlobalTel for $30 in order to receive your call. First, don't expect to recall even a fifth of your friends' cell phone numbers from memory, let alone their home phone numbers. Second, don't expect your parents to shell out $30 to receive a collect call from you—it's just not logical. Your only option? The classic collect-call trick: when the operator asks for your name, you have approximately 4.5 seconds to get your entire message across to the receiving party. Rehearse your sentence before calling. When you've cut out enough extraneous verbs and articles to sound like Microsoft tech support, you know you're ready. I would suggest including three key phrases: “Your name,” “in jail,” “get me out.”

4. When you get your mugshot taken, visualize Nick Nolte's DUI mug.

Trust me, you'll laugh about it later. And if you ever do anything famous, you'll end up on thesmokinggun.com too.

Just how illogical is this? Dumbfoundingly illogical. Put it this way: Imagine how much money you could make as a telemarketer by selling services at a 50% premium to clients over the phone. Now imagine you had to wait for these clients to call YOU. Now imagine blocking all of these clients from ever initiating contact in the first place. Congratulations, you now have the business model of a bail bond company. Don't expect to go public anytime soon. And just to torture you, the jail offers a list of over 25 bail bond companies phone numbers above the jail phone. Oh yes, you can dial them all you want, but that's what we like to call an “exercise in futility.” Read on.

6. Do not over-exercise in jail.

If you need to do a few standard push-ups or sit-ups to blow off some steam, fine. But do not be the Tae Bo idiot training for the next Billy Blanks video. You don't need to intimidate a bunch of DUI and petty larceny thieves. Besides, you won't be around long enough to bulk up or join a prison gang.

It's too easy, and you'll only get laughed at. Remember, this is a minimum-security facility where they leave all the cell doors unlocked so you can wander around inside your block (a two-story area with tables in the middle holding about 50 inmates). Look, they even open the door to the entire block to serve meals. Only a couple of napping security guards and a door buzzer stand between you and the outside world. The only escapes that make the news involve rooftops, ladders, razor wire, chisels, tunnels, bodies of water, electric fences, and Iraq.

8. Take whatever meal is offered to you.

Sentenced inmates have to take their meals by roll call, but all inmates are eligible to eat whatever tasty entree is on the menu. Remember all the stuff you refused to eat during middle school lunch? Yeah, the cafeteria workers made notes and put it on your “if you ever go to jail” record. This includes a healthy serving of prunes to keep you regular. That being said, if you skip a meal, don't expect to wander into the kitchen for a snack later on when you decide you're hungry. That might be considered an escape attempt, in which case you'll get laughed at for being fat.

9. Find the old guy with the beat-up checkers board and let him win.

He'll feel like it's his first day in jail all over again, and you will become his understudy—a valuable position when it comes time for negotiating with the asshole warden. There are two kinds of inmates: orange suits (sentenced) and plain clothes (held until bail is posted, aka you). Old orange-suited guy has been in and out of jail enough to know the warden personally and buffer your pitiful pleas with kiss-ass know-how.

10. Embellish the adventure of your capture and arrest until you've gathered a small crowd.

Once again, it's all about P.R. If you market yourself correctly in jail, you will garner favors and insight into getting out. After the phone broke in my block and the guard said tough luck, another inmate explained to me that Officer DeMarcus would be in at the 7am shift change to let me use a different phone. Thank you, Officer DeMarcus, I now realize that indeed, all 25 bail bond companies do reject calls from the city jail.

11. Don't leave jail without a shower!

Each cell has two inmates, a shower, and a toilet. When they call your name on the P.A. and tell you you've made bail, quickly ask one of your enamored inmates if you could borrow their cell to take a hot shower and a steamy dump. Mmmmmm, prunes!

Stay tuned next year for “Earning Your Bachelor's Degree from Maximum Security!”

Related
Guided Meditation to Help You Stop Thinking About the Boat Tunnel Scene in “Willy Wonka”
R.J. Kushner
A Healthy Guide for Dealing With Loneliness
Wesley Jansen
The Definitive Guide to Why This Season of “Game of Thrones” Just Isn’t Season Four of “Cheers”
Keith Rubin
Resources