A look at 4 of the most ridiculous and retardedly dangerous activities.

Of course, there are some people out there who do crave excitement and adventure. Apart from being poor Jedi candidates according to Yoda, these people are trying hard to remove themselves from the gene pool. Seriously, you want to strap an elastic band to your legs and jump off a bridge? Unless you're doing it to impress Bret Michaels, I can't think of a good reason to endanger your life for a 4-second thrill. Maybe for a pair of AMA Supercross tickets?

In buzkashi, a player's goal is to grab a headless goat and pitch it across a goal line.Danger enthusiasts claim that it's the adrenaline rush that makes such activities worthwhile. But according to some guy in a lab coat, adrenaline is really nothing more than a sympathomimetic monoamine derived from the amino acids phenylalanine and tyrosine. And if you're not already asleep from reading that last sentence, you'll agree that adrenaline is actually boring science disguised in spandex and pushed out of a plane.

And yet, these kinds of insane pursuits remain popular. These days, participants call them "Extreme Sports," instead of a more fitting moniker, like "demented small-penis overcompensation." Often, you see the first word spelled "X-Treme," adding to the extremeness. But if you believe that, chances are you're skysurfing in a Mountain Dew commercial right now.

Court Sullivan once said he'd rather bungee jump than skydive– with bungee jumping, you're basically going to live unless something goes wrong. With skydiving, you're basically going to die until something goes right. But even these two activities, once on the cutting edge, are now seen as mainstream by real adrenaline junkies.

That's why I've been studying the international take on extreme sports. I'm curious how far foreign idiots will go just to get their blood pumping. Stupid bastards. Don't they know they can get the same effect from escaping a 3-star wanted level in Grand Theft Auto? 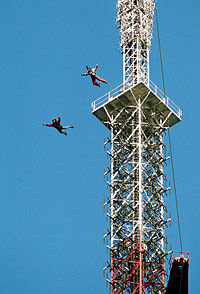 The most dangerous thing a person can do overseas is attend a South American soccer match wearing the wrong colors. But BASE jumping is a close second. Some thrill-seeking Norwegian once decided that jumping out of a plane offered too much time to find and pull the ripcord on his parachute. So, he started jumping off buildings and bridges instead, where there are a lot more flagpoles and support beams to smash into.

Enthusiasm for the sport spread rapidly across the globe. Often, jumpers got arrested for trespassing before they even had a chance to turn their bodies into oily pavement stains. This fact doesn't make BASE jumping any less dangerous, though. You try sharing a holding cell with a strung-out junkie while wearing a bright orange jumpsuit.

Since 1981, over 120 people worldwide have died as a result of the sport (even more if you count the henchmen who tried to prevent James Bond from escaping). Wait, can I even call it a sport? Is there any sort of objective other than "don't get smushed?" This kind of thing is surely taken into consideration by the Olympic committee. Ice dancing may be fruity and weird, but at least they figured out a way to keep score. 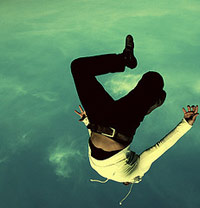 Actually, if you still need the safety of a parachute in this day and age, good luck making it onto YouTube, grandma. The latest fad in extreme sports is something called Banzai Skydiving. As you may have guessed from the name, this one comes from our friends in Japan. Banzai actually means "Deluxe Snack Panties Plummet Party!"

The rules are simple:

As if Japan didn't give enough to worry about, what with the tentacle fetishes and the robot obsession, now there's a very good chance I might be struck and killed by a wayward salaryman. No amount of apologetic bowing is going to make up for that.

When I first read about Banzai Skydiving, I was dubious. Some things are too fucked up even for the Japanese. But it's even in the Guinness Book of World Records, 2007 edition, page 95. It's not listed under "Suicide, funniest way to commit," although it should be. No, they measure how much time jumpers are willing to wait before they go after their chute.

The world record is apparently held by Yasuhiro Kubo, who waited a courageous 50 seconds before leaping after his parachute. After he returned to earth, Kubo was quoted as saying "I fly like mighty dragon with nothing but the wind of my ancestors to protect me. Drink Kirin Beer." 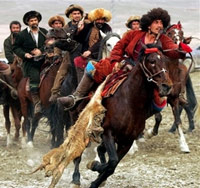 But when it comes to dangerous sports, Japan has nothing on Afghanistan. The country has always been a shithole, even well before it was bombed into the Stone Age by the forces of justice. But there was once a time when a young Afghani guy could get his adrenaline on, playing a horseback sport called buzkashi.

In buzkashi, a player's goal is to grab the carcass of a headless goat and then get it clear of the other players and pitch it across a goal line or into a target circle. Well, that doesn't sound so…wait a minute, headless goat? I'll admit, some Western sports equipment comes from dead animals, but there's almost no chance a football is going to squirt intestines at you during a game.

But what's even worse than the decomposing maggot farm of a game ball are the rules governing contact between players. As you may have guessed, Afghanistan really doesn't have a governing body responsible for enforcing buzkashi penalties. As a result, pretty much anything goes in your mission to drag that goat carcass across the goal line

According to my sources, if you're lucky enough to take possession of the ball, you can expect hordes of horse-mounted maniacs to try and kill you. This is not a rugged sports analogy; they will literally try to end your life. Players end up with shattered faces, broken bones, and worst of all, hurt feelings. Plus, I'm pretty sure an American artillery division peppers the field during play. Suddenly, NFL linemen don't seem so tough, do they? 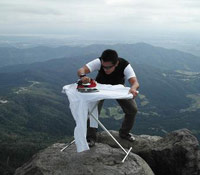 Our foreign tour winds up in England, the country that brought such riveting spectacles as cricket and the monarchy. Most British people are exhilarated by things like bird calls and oddly-shaped pieces of toast. That's why it's no surprise that their contribution to adrenaline sports is something called "Extreme Ironing."

Yes, such a thing actually exists. Obviously, it caters to the British sense of whimsy and eccentricity (read: gay). As with most British things, it's tough to tell just how firmly tongue is planted in cheek. On the one hand, we're talking about actual, honest-to-goodness ironing. On the other hand, people are doing it in very real, very dangerous locations.

Look, I appreciate the fact that Britain gets a few chuckles by juxtaposing serious and goofy things. That was pretty much the whole premise of Monty Python, before nerds made a religion out of quoting it. But extreme ironing just doesn't have the comedic staying power of, say, Benny Hill. One day, someone's going to get killed while pressing a shirt on Mt. Everest, and the bastards at General Electric won't care.

All nations, with the possible exception of Switzerland, can lay claim to some retardedly dangerous activity. Whether you're ice-climbing in Russia, hang-gliding in Australia, or just tempting fate by driving in South Africa, every corner of the globe offers new and innovative ways to maim yourself. What point do we think we are making by doing these things?

The way I figure it, as long as women continue to be insatiable maelstroms of sexual energy, there will always be men willing to risk their lives to impress them. Cavemen probably drenched themselves in barbeque sauce and wrestled sabre-tooth tigers. And in the future, I won't be surprised to see full-contact rocket lava-boarding. But as long as I can watch it on ESPN8, I won't complain.

I have a friend who's kind of stealthily British. He seems normal in all respects, but he'll occasionally slip up by mentioning some kind of fancy cheese by its full name (Cheshirefordhamwickstead, or something like that). And once you meet his family, his Britishness can no longer be in doubt. The rest of us like to mockingly call him to dinner in their voices, which consists of yelling "Beans!" in the stupidest British accents we can muster.

I don't know why it's beans, that just seems to me the kind of thing Brits have for dinner. And when I learned that a major producer of canned goods once offered university students a loan in the form of a year's worth of beans, it became the perfect addition to our little riff. "Beanloan! Time to pay back your beanloan! Mustn't keep the bean collectors waiting, old boy!"