It's well known that FBI director J. Edgar Hoover was a flaming, cross-dressing closet queen with an obsession for large male appendages. Hoover was such an insatiable sausage-hound that when one of his ex-lovers invented a device to pick up dirt, he named it “The Hoover” in his honor. Like its namesake, the Hoover vacuum cleaner could purportedly suck a softball through a garden hose.

Hoover had outlaw John Dillinger under arrest, but when “Big John” broke out of the Crown Point Indiana jail back in ‘33, he humiliated Hoover and the FBI. Hoover hated Dillinger because he was jealous of Johnny's rumored 23-inch “Tommy-Gun.”

In the early 60's Hoover turned his sights on then-president John F. Kennedy and his mighty Irish Shillaly. Jack reportedly had to have a strange piece of ass every day or he got a migraine headache. With “Johnny-Be-Bad” around, the crack of dawn wasn't safe. It got to the point where the Secret Service had to cover up all the light sockets in the White House lest the leader of the free world electrocute himself trying to copulate with one of the outlets. 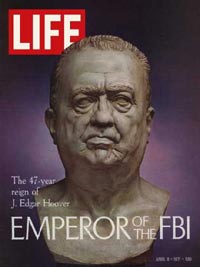 Hoover liked to think he was erect at all times. Hoover had the goods on Kennedy since he'd been bugging his numerous dalliances with the likes of Marilyn Monroe, mafia-moll Judith Campbell Exner, and the entire chorus line of the Broadway musical The Pajama Game, just to name a few. I'm not saying he had anything to do with JFK's death, but after the assassination, Hoover was once again the “biggest stick” in Washington.

Kennedy's successor, the appropriately named Lyndon “Johnson” (despite possessing a Texas sized post-hole pounder of his own that was nothing to sneeze at), didn't pose as much of a threat to Hoover because most of President Johnson's amorous affections were directed toward livestock.

Another of Hoover's big obsessions was the Reverend Martin Luther King, a “church” leader, as well as a notoriously well-endowed, serial womanizer, and Hoover (who had a pathological horror of sexual relations with women) loathed him. Again, he was consumed with jealousy and used the FBI to make King's life miserable. With King out of the way, it was mate and checkmate for Jane Edgar Hoover!

Hoover was finally done-in when G. Gordon Liddy, a member of tricky “Dick” Nixon's notorious “Plumbers” unit trained a killer-suicide squad of rabid gerbils and sent them to J. as a present. He died a painful and embarrassing death at Roy Cohn's townhouse later that evening during a “party.” His demise was officially ruled a heart attack, but the unfortunate gerbils were never heard from again.

Next time on Underground History: Hitler, The Fuhrer of Farts.

Related
The End of the World Will Get Such Great Ratings
Donald J. Trump
How Great was Gatsby? My Book Report on The Great Gatsby
Andrew J. Michaels
The Great Outdoors with Jesus Christ and Friends, Episode 2
Chad Russell
Resources