As an integral part of the business operation, surely Death deserves more credit.

To be fair, I do see what you're saying about time management, I really do. There's definitely some opportunity for me to grow there, so I'm glad you reached out to me about that. I was thinking about taking one of those Franklin-Covey Solutions seminars. I've brought it up to Dave like seven times but he never signs off on it. So, maybe if you could take a look at the costs?

Oh, no, that's not what I was getting at! I know there's a salary freeze right now. I get it. I'll remind you though, Mr. Thompson, sir… do I have to spell it out? Starts with an "O." I didn't vote for him. I've got a joke for you, at my own expense: Who's the last president I voted for? Lyndon B. Johnson!

There was this article in Forbes last month, don't know if you caught it, about how self-deprecating humor disarms people. A key tool, they called it. Builds trust. Might be something to incorporate, when working with the families. Just a thought.

May I speak candidly? Cards on the table?

Well, it's not that I don't feel valued here. I do, it's just…I guess I would like my value to be more externally expressed. I really feel that this place has gotten more and more life-affirming over the years. What with the tribute videos and "celebrations of life" and all. It's just…I'm the frontline, you know? I am literally the face of this business, and I am a bigger part of this than you and Dave seem to recognize. 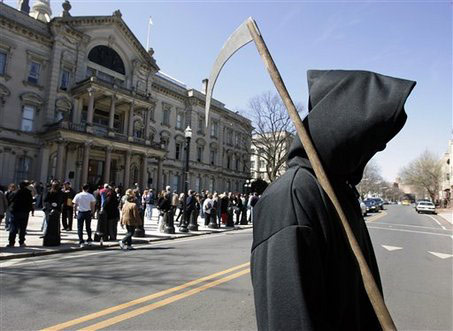 There's no denying exactly how many clients I've brought to the table.

I would just like to be presented as a more integral part of the brand, especially where the families are concerned, and I would like to be given more autonomy, and, you know, maybe this sounds a little overly ambitious and hungry, but fuck it! I am hungry!

I would like expand my skillset. Five years from now I see myself doing the dressings, I see myself doing the surface embalmings. I'd love to handle some of the social media. I'm confident that I could really build our presence. Is it so wild to you that I imagine myself sitting with families in a few years, calling the churches and florists? Is that crazy? Maybe, but if your dreams don't scare you, they're not big enough!

Honestly, I think the synergy around here is an area of opportunity for us. Sometimes I feel micromanaged.

Take Edwin Sawyer. Here's a guy with a nice pre-arrangement that was set up seamlessly by you and Dave. You guys got him down for two days of calling hours, Batesville Aries White with the Memory Foam mattress, tent and chairs at the graveside. You boys worked your magic, I don't deny that.

But the thing is, then you completely distrusted my core competency. You tried to prioritize for me.

You tell me on Wednesday that you want me to do Mr. Sawyer before the weekend, because Tommy's going down to Pensacola and you don't want to have to come in. I get it, sir—believe me, I steal off to Florida whenever I can, but Thursday I go in to Gentle Transitions to assess Mr. Sawyer. The guy smells like rotting nursing home tapioca pudding, his nails are longer than your wife's, there's dirt from 1976 under there, and he hasn't had a shave. It would have been a mess for you gentleman.

So I elect to use a modicum of discretion and wait until Friday, when hospice has given him his bath and haircut and his grandchildren have finally gotten their act together and Ubered themselves in from wherever the hell. Have you read The Four Hour Workweek? Sometimes it's gotta be about working smarter, not working harder. I use my judgement, and I take him when he's clean and ready to go. Practically done.

But then I come in Monday morning and there's Dave, going on and on about how he spent his entire Saturday trying to get Mr. Sawyer's complexion to look like something other than molding chicken, how he's such a hero because he had to shave the guy's nostrils. He's trotting everyone into the chapel to coo over the cherub he's made out of this octogenarian man, goes on and on about how long it took, Instagrams the whole thing.

Dave, of course, takes advantage of this and hugs them in a way that I would not consider to be appropriate for the workplace. Because "life's too short!"

Does he even consider the amount of hostility and othering in that statement? No. Does he even mention the fact that I took care of the guy when his cheeks were already fucking rosy from having one last beer, which is, by the way, a technique I'm looking into having patented?

Of course not. He just goes on and on about how Mr. Sawyer looks just like he's sleeping peacefully, and then takes a long lunch.

I'm not filing a formal complaint. I'm not that guy. And I understand about the raise. And somebody a little bit more vivacious should probably be running the Twitter account. I get that. I'm happy here. Really. But sir? I've got quite a few PTO hours accrued, and I would like to take a holiday.