Will Your Death Amount to a Joke?

Ruminations on death, life, and nothing in between.

A few weeks ago an old childhood friend of mine passed away. His name was Daryl, and we used to do everything together. That is, until a teacher caught us kissing in the boys room at school one afternoon. I was young and it didn't mean anything; I was just exploring a natural sexual curiosity. But when the principal found out, he was not happy. It had nothing to do with the fact that I kissed a boy, he just really didn't like the fact that I had become so close with the janitor.

I need to start living my life better so that someone, someday, isn't writing a joke about how I died, but a touching piece about how I lived. His funeral service was beautiful. I was worried I was gonna lose it, but I did a good job at keeping it all inside. Although, when the pallbearers approached the casket to take him away, it hit me pretty hard. I finally let it all out and every one in attendance just stared at me. The only thing I could do was turn around and say, "I am so sorry. I had Brussels sprouts before I came here."

Everyone dies though. That's just a part of life I guess. I remember when my grandfather died, it was rough. He was a man of few words, so when he died it took two weeks for anybody to notice. We just thought he was watching PBS very intently, but when no racial slurs were uttered during Obama's State of the Union Address we all knew…

It affected me a lot because he was the only grandparent I had on that side of the family. My grandmother died years before I was born. She was killed during a bank robbery. On October 14th 1985 at 11:32am two masked gunman entered and held up the Bank of America in Boston, killing four and wounding twelve people at the exact same time my grandmother was hit by a Buick in Phoenix.

I like to think my grandmother is up in heaven right now taking care of my old cat Ernie. I got him from an animal shelter up the road when I was six years old and I loved him from the first second I saw him. He was a very peculiar cat, but he was family nonetheless. He would steal belts, chew off shoelaces, and disappear for hours at a time. At first we thought it was cute and mischievous, until my brother found him dead in an attic crawl space dressed in leather with a ball gag in his mouth and a belt around his neck.

We buried Ernie in the backyard next to a tree. My neighbor Gus came over and helped me. That was the first time I had ever encountered death firsthand. It was hard for me, and I didn't quite understand it. It scared me honestly. I looked up at Gus, started crying, and asked him what happens after we die. He looked at me and said, "Welp, a doctor cuts a great big hole in us and looks at our insides, then we're put in a display case so people can stare at us for a few days before bugs start eating our bodies. There's absolutely nothing to worry about, kiddo." 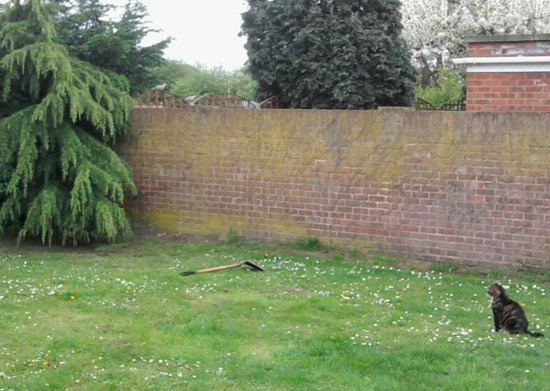 Don't worry, buddy, you couldn't have seen it coming. Eroticism gets the best of us all.

Native Americans believe we are two souls inhabiting the same body, and when we die one soul dies with the body, and the other goes to heaven. If that's the case, and we have two spirits inside of us, that may explain why my Aunt Carol was such indecisive old bitch.

Aunt Carol was one of those people who should have died years before she actually did. She lived to be one hundred and eight years old, and she definitely acted her age. She was so old-fashioned she blamed 9/11 on "The Blacks," and when she saw kids skating down the street on Rollerblades she accused them of witchcraft.

Thankfully, she died in her sleep last June. Someone broke in and beat her to death with a telephone during her 4pm nap.

She's probably in hell now, climbing up the corporate ladder.

I don't know why I'm writing all this. It could be that I'm having a moment of clarity, suddenly acutely aware of my own mortality. Or it could be that XNXX is down at the moment and I have to keep my hands busy somehow. I'm starting to realize that one day I'm actually not going to be alive anymore, and that sucks. I need to start living my life better so that someone, someday, isn't writing a joke about how I died, but a touching piece about how I lived. I want people to remember me in a positive way.

Some people say they don't want their funeral to be a sad event, but a happy one. My funeral will have a theme, I think. Something that reflected the way I passionately lived my life. Right now I'm stuck between Naked Yoga and Israeli Street Fighting. I haven't made up my mind yet.

I suppose I could combine the two. I dunno though. I have the rest of my life to decide.

Related
How to Apologize to Your Dentist for Not Flossing
Bryan Mangieri
This Halloween, My Son, You Will Dominate the Streets
Matthew Leader
I Apologize for the Clown That Was Juggling at Your Grandfather’s Funeral
Kurt Zemaitaitis
We, the Deep State, Concede That All Your Conspiracy Theories Are True
Hunter Gardner
Resources