The Keith Jeep Foundation, Little Douglas, and Hot or Not

There's more than meets the eye.

Keith Jeep introduces you to his new foundation. Jean Collins shares yet another engrossing interview. And the PIC Newspaper lets you in on the do’s and don'ts for summer 2021! 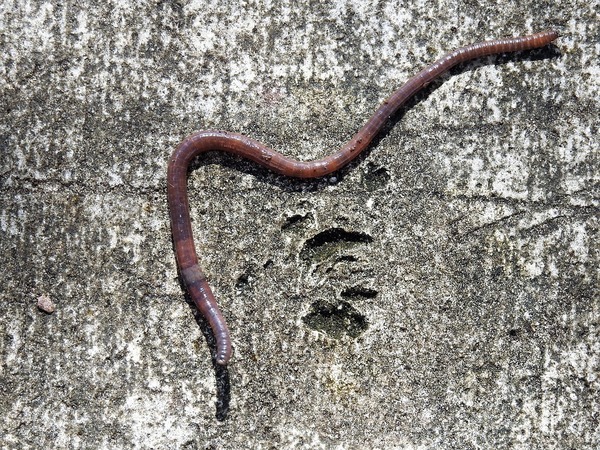 You’ve probably noticed from my formal greeting that I’ve taken a more somber tone. Most weeks, nothing waters my garden more than giving you tips and tricks for enjoying our beautiful earth, but today I just can’t summon the joy I need to write something like that.

I’m here to speak with you about an issue that is near and dear to my heart. Today marks the three-week anniversary of my dear friend Tammy’s passing. Though I only knew her for a short time, I was awed by her tenacious spirit, her long, wiggly body, and her ability to break down organic matter. She was more than a friend.

It was my stand-in father, a gray wolf named Romulus, who taught me the importance of making sure our beautiful outdoors were a welcoming space for all creatures, regardless of size. I’ve tried to live by that lesson ever since, whether that means making small umbrellas for mosquitoes, serving as a doula for the birth of a litter of mice, or even having a difficult but surprisingly intimate conversation with a hot-shot brown bear who thinks he’s king of the forest. Tammy had found a safe home for several weeks on a street corner in town where I go to buy my oats. But sadly, I found that her vibrant life had been cut short by the irresponsible actions of a pedestrian. Yes, dear reader, Tammy was taken from us in the way that we all fear.

Did you know that one in 16 worms falls victim to squishing every time that it rains in an area with sidewalks? It’s true. I’ve seen it happen. It’s earth-shattering. Countless worm families—worm daddies in their worm berets, worm mammas pushing tiny worm strollers full of worms—all ripped apart by the heartless squelch of a Blundstone.

Yesterday, when I was sobbing so much I couldn’t finish my morning bowl of pine cones, my daughter, Adi, said to me, “Dad, stop crying about that worm.” And do you know what? She was right. It was time to stop crying about Tammy. I turned to my daughter and said, “Adirondack Chair Elizabeth Jeep, you make a good point. Tears are a waste of time. We need to act.” Or my human mailman, Thomas, who said, “This happens all the time.” He was right too. Our society is sick. We have normalized worm death.

When I woke up this morning I didn’t think I’d be able to write at all. I still see Tammy everywhere I look, mostly because it just rained and those wriggly little guys are everywhere. But it’s not just them. Every piece of string, every thicker-than-average beard hair, every spaghetti noodle, they all remind me of her. A patch of dirt that I’d ordinarily love to scoop up and give a good sniff just makes me think of the home Tammy was supposed to return to on that fateful afternoon. I had to throw away all my hiking boots, because now I can only see them as the thing that ended Tammy’s beautiful life.

But one good thing that’s come out of all this is that I’ve realized I have such a supportive network of people around me who share my passion for protecting all our non-human friends. Because of this groundswell in support, I’ve launched a foundation, co-chaired by my worm friend Terrance, called Defend Invertebrate Rights Today (DIRT). Our mission is to save—and I mean this literally—every single worm.

I’m asking you, fellow Jeepers, to join me. Bring me your nicest twig, your strongest twine, and your passionate spirits to help me construct hundreds—no, millions—of small wooden huts to temporarily house each sidewalk worm. I will dedicate every waking hour (when I’m not working at my other foundation, reattaching bark to trees) to constructing and implementing these structures, these habitats from humanity.

Earthworms have five hearts. I’m only asking you to have one. 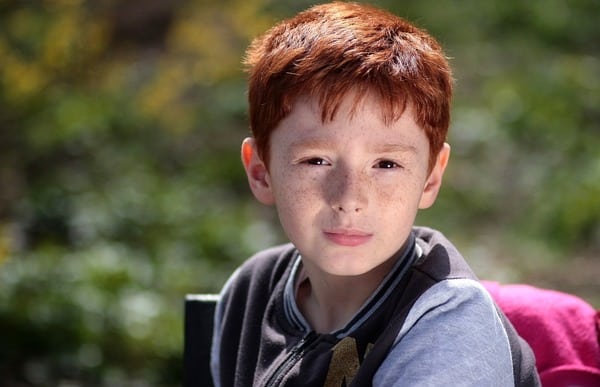 I hope you’ve all had restful, educational weeks. I know I certainly have. This week, I called little Douglas at 1-452-672-1789. Here is our conversation.

Jean: Hello! This is Jean Collins with the PIC Newspaper. Who am I talking to?

Doug: Hello? This is Doug. Do you want to talk to my mom?

Doug: Seven and a half.

Jean: Ah, the throes of childhood. I think we all look fondly upon the times in which we were all seven and a half. And tell me Doug, what were you doing before you took this fateful call?

Jean: Sorry, it sounds like you just got cut off. Were you saying watching fireworks?

Doug: No, I was doing fire. My mom hid the matches but I found them. They were on top of the mantle.

Jean: Ah, the inquisitive young mind! So tenacious. Nothing can stop you from getting what you want. And tell me—what is it that intrigues you about fire? Is it the implication of passion? A passion for knowledge? What’s burning within you?

Doug: Fire is great. It’s good for burning. Everything burns when you light it on fire. And it makes everyone yell and scream. No one ever pays attention to me when something isn’t on fire. They never listen to what I’m saying.

Jean: How interesting! Fire: the material that first vaulted our very distant ancestors into an entirely new way of life. Its innate implication of destruction and subsequent rebirth. Like a phoenix—that’s a kind of bird, Douglas—rising from the ashes.

Doug: Well, birds are harder to light on fire than most things. Mostly they escape before you can get it on them. Even if you get one it might still fly away and then nobody notices.

Jean: Doug, I’d like to pivot here for a second. Tell me how you fill your days. Like yesterday, say.

Doug: I went to the museum with my mom.

Jean: Wow! What an inquisitive young man. I’m seeing that, one could say, burning passion for knowledge we were discussing earlier. Did you see anything you liked?

Doug: No, they kicked us out because I—

Jean: Because you were running around? Being a little too loud? A little too overcome with the classic rambunctionality of childhood?

Doug: Because I tried to light the paintings on fire.

Jean: It’s really interesting what “is” and “isn’t” art these days, don’t you think?

Doug’s Mom: Doug? Doug? Are you down there? I just got a call from the principal saying that you lit the lap pool on fire? Again. You have a lot to answer for, young man!

Bye lady indeed. For those of you worried about the younger generations, I can assure you that the fire burns brightly in their hearts. My conversation with Doug was short, but I have a feeling that this won’t be my last encounter with him. I can see him now, in my mind’s eye, all grown up someday, applying the burning passion within him to law, or medicine, or maybe, if he plays his cards right, interviewing the next generation of Americans.

You’ll be hearing from me soon, friends.

PIC's HOT or NOT

The PIC Newspaper staff went to an outdoor gym in Secaucus, New Jersey, and asked anyone we could find what was “HOT” and “NOT” this summer. Attached is the definitive list—all the ingredients you need to stay on top of the trends this summer. 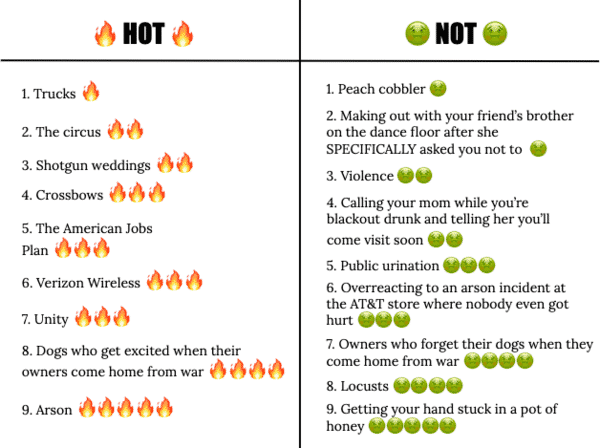 Thanks for learning with us again this week. We’ll see you next time!