A brand spanking new web baby has recently slithered out of the e-uterus of womankind. This repulsive spawn of their spiteful nature is called DontDateHimGirl.com. Go ahead, visit it, look around and soak it in. If you’re too paranoid about your mom checking your browser’s history or not really even curious as of yet, please allow me to explain. DontDateHimGirl.com is a self-described “online resource for women who have shared the experience of dating a no-good man!” Translation: it’s a malicious way for women to electronically molest their ex-boyfriends (as opposed to going out and fucking their best friends, as they did in my day). You see, this product of the Fe-mafia has been slowly growing in popularity, as it has been feeding off vindictive women’s irritability and a “nice guy’s” desperation. You must be saying, “Women can be vindictive? Nice guys are desperate?! No! THIS CANNOT BE!” Yep, sorry to rock your world reader, but it’s true.

But let’s be real. This stupid idea hasn’t gained enough strength that you’re on it…yet. I mean, maybe you’re lucky enough to be in the database of “cheaters, liars, and cads.” I mean, I’m not…as of this moment. But I’m sure once any of my or your nutcase ex-girlfriends gets a whiff of it and posts a nice little profile of you or me, she’ll get her hair done or severely emotionally scar a teen boy or polish her bronzed swastika…whatever women do when they’re happy.

“I’m going to put my own personal profile on this site to give some of those ladies something to chew on, before, of course, it’s my dick.”

Guess what? I’ve come to realize that I don’t like knowing that I’m the cause of my ex-girlfriends’ happiness in any way. And I think you’re with me on that. So, together, there is only one thing to do: I’m calling for an internet boycott of these stupid, uptight pieces of shit. Not only that…in this, our darkest hour, I’m sounding the alarm for an overdue 4th trimester abortion of this web baby. It must live NO MORE. It’s harmful to the social structure that men have so long attained and promoted—that is, a hierarchy fostering men as the undisputed champion of the sexes. Which, we are.

Even more than just all of that…I want you to think about how women are now, guys. They have boobs. They have vaginas. With the exception of drunken sorority parties, they are always in complete control of whether we men fuck or go home and masturbate to pictures of Tila Tequila. That’s the only power they have, and it’s the only power they fucking need. We buy them beer, we take them out on dates, and we act nice to their fat friends named Tiffany. Why? Because we have to. We do all of those things because we want to have sex with a decent girl. Not because we’re really “nice guys.” We fake it so they feel more comfortable with the idea of fucking our brains out on the toilet seat, kitchen table, or stack of spare tires behind my apartment.

So then, with all of this bullshit that we already do, why do they always seem to find new and exciting ways to collectively fuck the male species over? Seriously, half of my game is spent trying to decide which ploy the girl is using on me, and the other half is spent trying to figure out ways around it. Now I’ve got to worry about a fucking FBI database registering my every relationship move? Fuck that. I mean, I’m a fan of social evolution and all, mainly because I have faith in mankind’s ability to get around this crock of shit, but it’s such a waste of time.

Some of you readers may not be convinced that it’s a waste of time, so I’ll tell you why this is a fucking waste of time, especially for women. One, women love bad boys. They love James Dean, Elvis, and Johnny Depp for a reason: they’re badasses. They’re mysterious, sly, and un-whippable. And you know what? Women love bad boys even more if the girl thinks that her boy has changed his seedy, immoral ways for her. The truth is that any self-respecting badass knows how to lie to a woman.

Example:
Where was he last night? Studying.
Why didn’t he pick up his phone? He turned it off to concentrate.
Why are there panties on his floor? His sister came over to do laundry.

As you can see, this renders this website completely counterproductive.

Another reason women are wasting their time sticking e-dildos in each others e-asses involves a question all normal men must be asking right now: “How fucking insane do these girls have to be to actually find this site and look up their prospective boyfriends on it?” I mean, Jesus Christ, if a girl even asked my friends about my past relationships, I’m going to kick her ass to the curb. That’s not even considering she spent time browsing the internet for dirt on me. She needs to trust me or get the fuck out. I mean, what’s she going to say anyway? “I’m sorry, but somebody I’ve never met said something bad about you on the internet. And the internet is always right, so I’ve got to move on. I know it’s tough, but despite the fact that you’ve completely swept me off my feet, I have to go with my e-friends on DontDateHimGirl.com.”

Let’s be honest…if that happens, frankly, my dear, I won’t give a damn…and I doubt any other guy alive would either.

And the last reason why DontDateHimGirl.com is like farting in the wind, is that women just don’t like other women. How could they trust the opinion of some random Vag when it comes to matters of their heart? (Awww.)

I can see the conversation now…

“Hey Lindsey, get in here!”
“What’s up?”
”This guy I’ve been seeing is on this website and it says how awful he is.”
”Well how do you feel about him?”
“I love him.”
”Lisa (putting her hand on her shoulder), can you really listen to some random piece of shit, disgruntled, cock-sucking whore tell you how you should feel?”
“I guess not.”
“Exactly.”

You know, as I write this, I have come up with a brilliant idea…I’m going to put my own personal profile on this immoral site. I’ll be giving some of those inquiring ladies something to chew on, before, of course, it’s my dick.

Hold on while I spin a yarn… 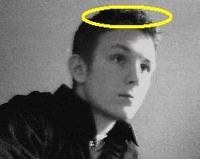 Nick was, at worst, the best love I've ever had. He was sweet, sensitive and all around wonderful. That is, for the first few months.

His prowess in the sack and penis size are unparalleled. I've slept with lots of guys, and I'll tell you, when he threw it to me, I took it. Though, it was sort of like catching a softball with a shotglass.

He knows how to use language to coerce you into a relationship for sure girrrrrl! Don't be fooled by his charm, his boyish good looks or his tantalizing vocabulary…this man is evil. He'll satisfy ever desire you've ever had, and then leave you in the dust for a better looking girl. But then, having his erect penis smash your loins almost makes it all worth it.

The circumstances of our fallout went like this: I got pregnant by his self-described “super sperm” and then he had sex with my mother, sister, cousin, best friend and librarian. I left him because all I heard from other women was how big his penis was. Luckily, I've been recently blessed with a beautiful baby boy named Shazkeen III, after his daddy's obsession with ironic monikers.

It took me about 45 minutes to write this profile. It’s not because I’m an idiot, folks. You see, I wanted it to seem woman-like. You’ll notice the lack of synonyms, the misspellings, the semi-desperate tone, and the whole vindictive nature of the whole deal. Also, the penis information was so that I wouldn’t sacrifice accuracy. Plus, it took me awhile to come up with a believable situation as to why a girl would think I’m an asshole (wink).

So, to cap this rant off, I’d like to make a suggestion:

Men, it’s time for our own website. We’ll call it YourPussyWasLooseAnyways.com, or ThisBitchIsPsycho.com, anything that gets that sort of point across. Or better yet, I want you to go there and start a profile of yourself like the one you see here. This way, we’ll flood their site with positive male qualities and their point will be so contaminated that they’ll have to succumb to our supreme dominance yet again.

Women, if you even consider this as a good idea, I’ll personally bite your clitoris off. And don’t tempt me…I already like the way they taste. Also, stop wasting your time with this bullshit. In the hours you spend searching and posting profiles, you could be running my bath water, or making me a grilled cheese sandwich, or even experiencing the nirvana that is my penis. And that should be your number one priority, ho.

The owners of the website…if you’re reading this, I wish you the best of luck obtaining a guy who doesn’t hurt you in some way (who also doesn’t bore the fuck out of you). We men don’t even know that we hurt you when you say we do. Pulling utterly stupid shit like this, ya’ll not only ask for that sort of treatment…you deserve it.

Not really part of this whole rant…but I’d like to mention that God is obviously a man.

Peace be with you. I’m out.

More Like This
If You Want to Date My Daughter You’re Going to Have to Help Me Get My Wife to Let Me Back into the House First
Matt Payton
11 Questions You Should Never Ask on a First Date at a Haunted Murder Restaurant
Tyler Holme
List: Trendy Uses for All Those First Date Red Flags You Ignored
Mary Siroky
Resources