Your Cat Hates You, Guaranteed

A hateful essay about felines, the assholes who lick assholes.

What's the only difference between a house cat and a Bengal tiger?

A tiger is much less of an asshole.

If a house cat could throw around 230 pounds of muscle, the human race would more than welcome a zombie apocalypse to help with their shitty cat problem.

Bob Barker knew something. He knew that if cats continued to breed, they'd continue to mutate, enlarge, and fill to the brim with rage. And not just any rage… Cat Rage.

Just think for a second—your cat weighs somewhere between 6 and 37 pounds and it controls you. 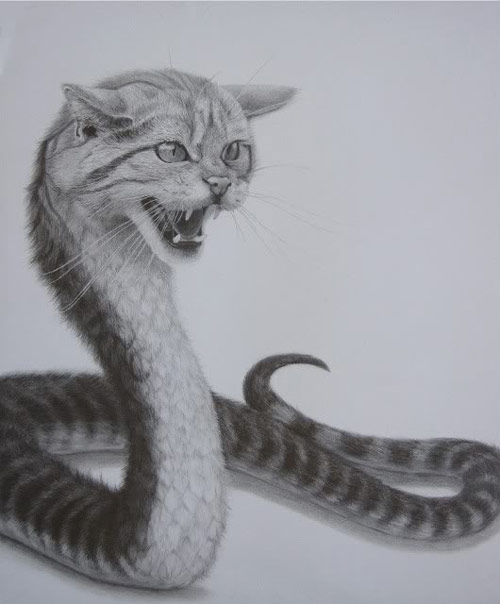 A cat is like that guy who dresses nice, keeps himself clean, but is a total dickheaded prick. He'd pee all over everything you'd own—if he was a cat. Which is exactly what all cats eventually do. Either because they decide they hate you, or they somehow end up living for 26 years and no longer own a bladder.

Your cat is 1999-2001 Marshall Mathers: filled with rage and sick, cruel jokes. He's slim and he's shady (unless you feed him too much Meow Mix). You can barely count on two hands how many times you've wanted to stuff your cat into a roaring blender. You didn't though, because you're better than animal cruelty. Unfortunately, your cat isn't. If he had the opportunity, he'd liquefy you and leave through the front door.

And are we even sure these creatures are domesticated? My buddy had a cat in college, and the first time I met this cat, he ran away from me. An hour later, he ran at me (Predator 2 style), bit me on the forearm, and disappeared back down a dark hallway.

That would've been the first time I ever said "What the hell?!" to a cat. But let it be known that I grew up with THREE cats. Cats that nibbled a hole into my ceiling and created an attical refuge. Weird. On most nights, usually around 3 in the morning, these three whisker-teers would race throughout the house. Pounding their paws to the carpet, mewing like idiots. Whenever I'd check to see if they were okay, they'd disappear, leaving behind only a ball of hair (and sometimes an undigested bird carcass).

That's right, cats kill shit. Every other day I'd find anything ranging from mouse to rabbit to possible hobo intestine lying on the back porch floor mat. As if to say, "Lookit that! I caughtz it, I killz it, and it's 4 YOU!" I hated cleaning up these animal guts nearly as much as I would someday loathe Internet "cat-speak."

You still think your cat loves you? You are a FOOL! They look at you as a reliable food supply-line. Once in a while, they'll let you rub their glands! Think about that. In exchange for putting a roof over their head, a roof over their bathroom, medicating them, feeding them, and being their supreme benefactor, they let you rub their glands. Yeah, what a "trade-off."

Right now, if you're a cat owner, you're probably staring at your fluffy little Persian as its diaphragm gently expands and descends while it sleeps peacefully on your couch. You're probably not thinking that he's been plotting a violent takeover ever since he lost his kitten-like innocence. Heed my word, cats are killers! They are the Phoenix Online diplomas of domestication. They got their certificate at their safety-safety-safety school. The claim to their tame is not accredited.

Yarn, catnip, scratching posts—these are not toys, they are distractions. Boiling chips that keep your cat's blood from simmering. They are what keep you alive. Your cat is an innate ninja. And if you don't meet his many demands. He. Will. Kill. You.

But look at you! You decided to be proactive like Bob Barker said, and had your cat spayed and/or neutered. Did you really think that was a good move? Way to rattle the lion's cage, jackass! Now your cat has a valid reason to snuff you out. You better pray he doesn't find out who did this to him! You see those stripes in his coat? Each one is for a different kill.

Your cat is an asshole that licks his own asshole. He pees in places for no reason. He shits in a box.If you're not convinced you should toss your cat into a storm drain, here's another feline fact to ponder: cats and snakes share the same eyes. Not as many of you would let your pet snake roam around the house, would you? I am no scientist (and ironically not a Republican either), but I wouldn't be all-that-surprised if cats also carried venom. Their breath smells terrible, they have fangs, and therefore they must be poisonous.

Petting a cat is playing Russian Roulette. 5 times out of 6, the cat abides. But that one time, no matter how innocuous the contact, he's going to PIERCE YOUR FLESH WITH HIS CAT FANGS!!! Who's to say he's not just a four-legged snake capable of filling your house with hyper-allergenic dander?

Just look at this table:

Your cat is 1999-2001 Marshall Mathers: filled with rage and sick, cruel jokes. He's slim and he's shady (unless you feed him too much Meow Mix). He hates his bitch mother that let him get "adopted." And now we know that your cat is basically a snake, too.

The most appropriate Halloween costume for your cat/pit viper that has ever existed has to be a droog from A Clockwork Orange. "Meow, a little bit of the ultra-violence, meow…" If you didn't do your best to keep him indoors, he'd be out on the town wearing a funny mask and beating up old people. Guaranteed.

Bottom line: your cat is dangerous and you should mail it to Madagascar. Put your "emotional attachment" aside and begin to realize that your cat views you as its food whore and excretion technician and that's it. Understand that during the night, your cat sits in the dark like an egg-laying hen, fantasizing your end days.

Your cat is an asshole that licks his own asshole. He pees in places for no reason. He shits in a box. And you claim to have "trained" him! But truth is, he's trained you! Trained you to empty said shit box. Trained you to give him his space. To give him something carpeted to scratch so he doesn't destroy your couch and gouge out your eyes. He doesn't need you. You need him. If you died alone in your apartment, he'd be cool with that. If he ran out of kibble he'd probably eat your extremities. He could live for years off of your carcass. Playing with your hair, chewing your ear lobes, carving dirty cat words into you with each fresh pair of claws.

Your cat doesn't love you, he loathes you, and he's just using you because he doesn't have any other prospects. Don't believe me? Go outside and drop your cat in the middle of the street. Will he come back to you? No. He's gonna Mary Tyler Moore your ass and be on his merry little way.

Moral of the story? Cat's don't have morals. And they won't give you companionship, they'll give you herpes.

Related
How to Get Your Son to Stop Cockfighting, While Still Being the Cool Dad
Jacob Albrecht
Ways to Straight Up Chill with Your Homeboy, Even Though He’s Always Chasing a Cartoon Bird
Ryan Ciecwisz
FAQ: Your Rescue Monster
Kent Jones
Resources