A modest proposal for preventing overeducated college students from being a burden on their parents or country.

American universities seem to be graduating intelligent young people who spent four years expanding their minds with literature, philosophy, gender studies, and history, but are unable to find employment in any respectable establishment, and so they flood the streets of cities and protest against people who do have jobs and institutions that have helped make America successful. Instead of seeking employment or some way of being useful to the publick, these university graduates seek to overthrow the status quo. Why? Because instead of preparing students for some form of useful function in society, universities do nothing more than fill their heads with silly ideals that can never be realized.

The problem is that too many young people are receiving an education these days, for which there are not enough respectable positions in society that require a degree to fill. Too many young people attend university to attain a degree in one of the humanities, which leaves society with a surplus of unemployed philosophers, writers, and political activists who have nothing better to do than Occupy Wall Street.

It's not the government's fault that most young people who want to attend university come from poor families. I think we can all agree that the intellectual, environmentally-friendly, liberal, unkempt, vegan-clothing wearing young people—more commonly known as hipsters—camping out in city parks, blockading sidewalks, and verbally and physically abusing respectable citizens on their way to work are, “in this deplorable state of the Kingdom, a very great additional grievance.” Perhaps they would benefit society if they received some practical training for positions such as gas station attendants, cashiers, plumbers, public transportation engineers, manicurists, hairdressers—professions that do not require four or more years of university and a degree.

For some reason, it has become imperative for young people to attend university in order to be “successful” in life. But a degree no longer guarantees employment. Young people are told that they need to go to university, but the fact of the matter is that not everyone can afford a university education. Since young people today insist on going to university, they turn to the Federal Government to offer them monetary assistance—charity—to spend four years or more earning a degree that will not help them be useful to society. Many choose to remain in school as long as possible, earning every degree imaginable, in order to evade their responsibilities as citizens of a free market society.

Somehow, identifying oneself as a “student” allows one to act like a leech. Your typical state university student would be considered low-class, impoverished, equivalent to a low-income person on welfare in the “real world.” University is a sheltered universe where students are expected to find themselves. But they are only able to do this because the government “loans” them money for no other reason than being poor. It's not the government's fault that most young people who want to attend university come from poor families. The government should not loan students copious amounts of money on the condition that they will be able to pay the money back. How can children of poor parents be expected to become successful? To make more money than their parents who could not afford to send them to university in the first place? 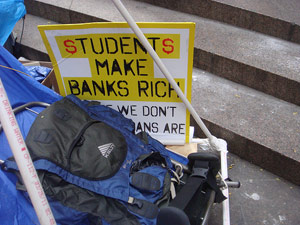 Attention students: stop becoming students. I am all for aiding the poor and unfortunate, but that does not mean we should hand them things on a silver platter. Poor people need to learn to work to acquire things on their own. Of course it is sad to see the huge burden children place on poor parents, especially when it comes to financing their education. Some poor parents may be willing to take out their own loans to help finance their children's education, but they know that the other responsibilities they have to society will not enable them to receive more federal loans and pay them off in a timely manner, which is why students turn to the Federal Government to receive loans that they do not have to begin making payments on until they are no longer students. No wonder our National student loan debt is greater than our National credit card debt. I am not saying that the government should stop providing the poor with means to attend university, but I do believe that the government should require something more in return.

What I am proposing is a student loan program that will allow poor young people to go to university and be useful to society: I call it the Indentured Student Loan. Any poor young person unable to afford university and unwilling to enter a profession more suited to his class can apply to the government for a loan and must sign a contract obligating him to become an indentured servant upon graduation in order to work off his debt. This program will be made possible by raising the taxes of the incredibly wealthy. The generosity of the wealthy members of our society will be repaid by employing students who took out loans as indentured servants on their estates. A small living wage will be paid to the servants for the purpose of purchasing food, clothing, toiletries, and other small niceties.

University graduates are not expected to be servants forever. The number of years they remain indentured is contingent on the amount of money they have to pay on their student loans. Graduates should not expect to serve for fewer than ten years. Serving wealthy benefactors will provide graduates with a wonderful opportunity for steady employment, keep them off Wall Street, and teach them the value of hard work.

This new loan policy will, in time, deter any young people who cannot afford university from attending. Instead, they will pursue technical training for jobs that are best suited to their class, which means that more employment opportunities will be open to the small percentage of young people whose families can afford to send them to university. This percentage excludes the number of young people who are fortunate enough to receive scholarships. I have no problem with scholarships because they are awarded to students based on ability and success—academic ability and success. I do not believe in awarding athletes scholarships because they will help the university football or tennis teams win. A surplus of university athletes is worse than a surplus of idealistic, unemployed Humanities majors. Why? Because student athletes spend less time in the classroom than they do on the playing field. A university education is therefore pointless for athletes. Why go to university only to play a sport and become a useless member of society?

American universities are overpopulated with students, a vast majority of which are unable to afford their education without the Federal Government Student Dole. Because so many students are seeking university degrees at once, the respectable job market cannot possibly make space for them all. The Indentured Student Loan should be able to reestablish order within the nation—only the wealthy will attend university and hold respectable jobs. The rest of society will need to learn a trade in order to be useful to the respectable members of society.

“I profess in the sincerity of my Heart that I have not the least personal Interest in endeavoring to promote this necessary work having no other Motive than the Publick Good of my Country,” by assuring that the country be run by the wealthy select few.

I Would Be the Best Writer in the World but Oops, My Pencil Broke
Audrey Clark
This Town Ain’t Big Enough for the Both of Us
Graeme Carey
An Open Letter to People Who Hold Up Their Middle Finger in Instagram Photos
Robert Criss
Your Ego’s Writing Checks Your Body Can’t Cash! That’s Why You’re the Perfect Candidate for Our Top Gun Overdraft Protection Program
Doug Kolic