The greatest tenet of freedom is a free market. The "gotcha" media would have us believe that the subprime mortgage crisis was caused by deregulation of the commercial and investment banking industries. They assert that Wall Street shouldn't be allowed to self-regulate its investment banks, and should require heavy government regulation at its rating agencies. They claim that deregulation led to banks taking advantage of the system and rating agencies incorrectly rating some $3.2 trillion dollars of subprime mortgage-backed securities. Was that wrong of Wall Street? Were those banks not simply taking bold, fresh approaches to our economy, much the way the founding fathers took a new approach to government? Were the risks taken by those ratings agencies not brave moves made in the face of odds stacked against them, the way Rudy took on Notre Dame elitism?

In the first throes of deregulation, there will inevitably be heavy casualties. Becoming almighty, Wall Street will need to test and demonstrate its power. Wall Street does not possess our human failings—it is numbers and dollars and asphalt. Knee-jerk, reactionary "Obamination" politics fuelled by the "drive-by" media preach the need to regulate the economy. How can the markets recover with its hands tied behind its back? How can one get back on a horse without arms? With their teeth? That would be difficult and would surely harm the horse. This metaphor has illustrated my point.

The only solution anyone with common sense could come to is this: deregulate Wall Street. Completely. Let the markets be free. Free of bonus caps, government oversight, and the "prom-night-then-morning-after-pill" media.

Repeatedly, that same media has blamed "Wall Street greed" and "inhuman capitalism" and "tricking-the-poorest-of-the—poor-out-of-what-little-they-had" for a recession that started in the housing market; one of the single-most regulated sectors of the US economy. Ironically, though the media is free from regulations and censorship of its government, it seeks to regulate and control, a bi-product of its socialist agenda. Like speech, civil liberties, and AK47 ownership, markets must be free. There must be a separation of Wall Street and State. Only when this happens can the free market ascend to its rightful place in the hearts and minds of the people. 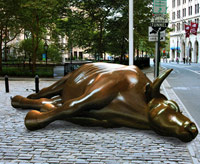 We must remain steadfastly bullish, or the bull will die, taking us all with it.In the first throes of deregulation, there will inevitably be heavy casualties. Becoming almighty, Wall Street will need to test and demonstrate its power. Fortunes will be lost, businesses will be closed, and retirement funds siphoned off to pay for necessities like bonuses, corporate jets, and moderate amounts of blow. However, this demonstration of unfettered power is entirely necessary. Generations will pass down word of the acts of the economy, instilling a deep-rooted fear of a vengeful market, so the devout will continue to adhere to its will.

Eventually, constant acts of catastrophic power will become blasé to Wall Street. The market will begin acting not in direct ways, and more with mysterious, trickle down tactics. Over the course of a few centuries, more and more people will begin to question the existence of the economy, having never seen it. Still many will live their lives with a quiet faith and know that if they live a good, fiscally righteous life, some day they'll be able to retire and purchase a condo or boat.

Brave American profits have already delivered the word of the market; profits like Rockefeller, Reagan, and McDuck. Some, like Bernie Madoff, have already been persecuted for their convictions and beliefs. Until the market is free, the faithful will await the day when their capital gains bear fruit, when the mysteries of derivatives shall be revealed, and the non-believers short-sold into damnation.

Only then we will be one nation, under the Dollar almighty. 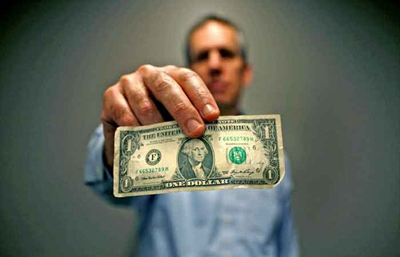 Related
A Bank Security Guard’s Inner Monologue as a Nearby Street Musician Performs Hall & Oates’ Greatest Hits
Bart King
The Wall Leaves a Series of Voicemails for President Trump
Eric Wilson-Edge
Excuse Me, Do You Have a Permit for This Outdoor Proposal?
Julien Perez
Resources

My favorite part about coffee is not hearing where the beans came from.