How to Write a Great Suicide Note

Make sure you leave a lasting impression on the world before you go.

Do you want to kill yourself one day? Of course you do! With this being the beginning of another academic year for college students, why wait for the pressures of finals to get here when you can get it over with now and open up an additional spot in that worthless class of yours.

But hold on just a sec, don’t go and take a bath with an electric blow dryer just yet you crazy bastard. First, it's considered poor form to commit suicide until you've called this number and talked with a trained professional stranger one last time: 1-800-273-8255 (or live chat online, or text TALK to 741741). It's the National Suicide Prevention Lifeline and it's free, confidential, open 24 hours. They'll listen and talk with you, and if you're still rolling your eyes after that, you can always hang up, your choice.

Now, assuming you've called or you're going to right after this article, you have some unfinished business to take care of, which of course is writing a good suicide note. Wait no, a great suicide note. This is of extreme importance because the note you leave behind to your roommates will be the standard to how they will remember you, and will be the lasting impression you leave on this world. Below are guidelines on how to write a suicide note that would make any English major proud.

No one wants to read a drawn out letter that just drones on and on. And most likely, you're probably not that interesting. So, in the letter, simply get right to the point—you’ll always leave them wanting more, which will drive people absolutely crazy.

Just because you’re writing a suicide note doesn’t mean you can’t have a sense of humor about it. Incorporate a joke or witty remark into your note. Here is one I might go for: 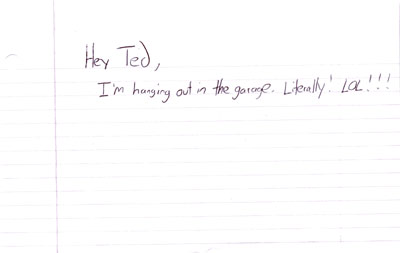 How awesome would it be to know that even though you ended your life, you could still be really smooth about it. Here's what you should go for: 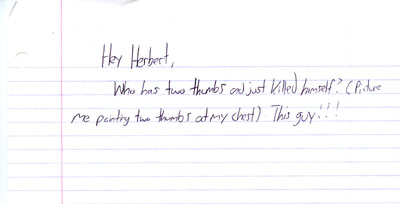 Guideline #5: Have your note serve a purpose.

After a suicide, people inevitably start blaming others and themselves for the misfortune. However, you can free all of your close friends and family of the guilt that it might've been their fault, and at the same time, help better society.

What am I talking about?

I’m saying you need to blame your tragedy on specific people, places, and things in society in your suicide note. This way, the blame will be placed directly on whoever was mentioned in the letter, and people will take strict action and put a stop to it. For example, write in your letter that you killed yourself because Tom Cruise simply would not shut the fuck up, or say that you simply could not live in a world where the show That’s So Raven or Keeping Up with the Kardashians is able to remain on the air.

Here is a list of other people, places, or things to blame your suicide on, and help rid the world of these nuisances:

Guideline #6: Leave the number for Domino's Pizza at the bottom of the note with tip money.

Let’s say hypothetically that it was your turn to cook dinner that night, but now, you’ve left your roommates in the kitchen hanging, while you’re out hanging from the tree in the back yard. At least now they have a plan for dinner and call the pizza man. You will be remembered and thanked for this. When your friend says a few words on your behalf, he will say, “I will never forget the day my friend took his life. It was a Tuesday and we were able to order the 5-5-5 deal from Domino’s. We all got different toppings and you wouldn’t believe how much it hit the spot. Wait, what was I talking about before?”

Guideline #7: Specify how you want your funeral.

Your funeral is like your last big party here on Earth. You should be able to have it your way, just like Burger King! I personally want an 80’s themed funeral, with the song “Take Me Home Tonight” by Eddie Money blasting as my casket is rolled out of the church. I can’t wait! You all better be there.