1 Your alarm wakes you up and you slowly open your eyes. The sun is shining, the birds are singing, it’s a beautiful day outside. You sit up, refreshed, ready to face the day. Do you:

• Get up and go to class, go to #2
• Decide it’s soo nice outside you’re going to skip class and go to the beach, go to #3
• Decide maybe you’re not really ready to face the day and go back to sleep, go to #4

2 As nice as it is outside, you’ve made a commitment to your education and decide to go to class. Besides, if you don’t get your GPA up, you’re parents will disown you and you’re looking at pumping gas for the rest of your life. You get ready and head to your class, sitting through a boring lecture on something you have less than no interest in. Your professor finally stops rambling and dismisses class. You stroll outside and contemplate your next move. Do you:

• Blow off class and get something to eat, go to #7 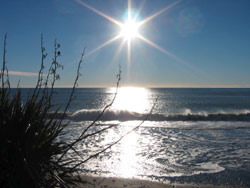 3 Oh, so you’re just going to skip class and go to the beach, huh? Is that your plan? Just hop out of bed and head to the fucking beach? You realize I go to college in New England and there’s literally about thirteen days when it’s nice enough to go to the beach.

Okay fine, you want to go to the beach? Sure thing, buddy. You get your things together, but before you get out of your dorm, guess what happens? You get eaten by a bear. That’s right, a bear just ate you. How do you like that? And it wasn’t a quick death either, he took his time, he really savored you. That’s what you get for being able to go to the beach in the middle of winter, you son of a bitch. END

4 You roll over and go to sleep. And later you wake up. What a compelling life you lead. It’s really fascinating. END

5 You decide to skip your next class and head over to the library to do some studying. The jokes on you, though, as you’ve never been to the library and couldn’t find it with a goddamn map. While you wander aimlessly around campus, tragedy strikes. That person you hooked up with last week and never bothered to call back is heading straight for you. Do you:

• Say “hello” and try to be generally pleasant to a person you wish would fall off the face of the earth, go to #8
• Avoid that person like the plague, go to #9

6 You trudge to your next class, cursing at yourself for enrolling in more than one class a day. What the hell were you thinking? Next semester, it’s no more than nine credits and you don’t care if that means it takes your parents another ten years to pay off your student loans.

You head into your next class and listen to your teacher prattle on about Indians, or galaxies, or how to throw a curveball or something. Mostly you’re just staring at that gorgeous creature that sits two seats ahead of you. My God, they are magnificent. With your head filled with thoughts of hot monkey sex, the class flies by and once again, you’re faced with deciding your next move. Do you:

7 Screw class, you need a fucking taco. You head over to the dining hall, but accidentally walk through a pick-up football game. You’re chosen for a team and before you know what has happened, the ball is in your hands. RUN!

You do run—you run strong and fast and proud. In fact, you’re so good, the coach of the football team signs you on the spot to return kickoffs for the team. You do this with great success, but then you get drafted, become a war hero, start a successful shrimping company, and marry a girl who will die shortly after of some horrific venereal disease. Oh no, wait, that was Forrest Gump. END

8 You fake a smile and attempt to act pleasant as this person, who is alarmingly unattractive in the light of day, kind of like a shorter, hairier Erik Estrada, walks toward you. You have obliviously misjudged the emotional scars your one-night stand has left on this person, as they see you and a fiery red-hot supernova of hatred grows in their eyes.

You don’t quite know what happens next, but when you wake up in the hospital a few days later, all the doctors can tell you is that your wounds are so grotesque, it made not one, but seven separate interns vomit. And that’s a state record that stands to this day. END

9 Your eyes go wide in fright. Not them, not now! You dive into a nearby bush, cutting yourself badly, but avoiding what would no doubt be one of the most awkward conversations of your life. And you found ten bucks while hiding in the mud. Score!

10 Okay look, you made your point. You went to your first two classes, okay? What are you John Q. Textbook all of a sudden? Skip this class, you’ve earned it. After all, you can always get your grades up on the mid-term. Or at least you can fool yourself into believing that. Go to #11

11 After a refreshing four-hour nap, you’re ready for what lies ahead of you tonight. You’ve put your time in at school and now it’s time to get down to what college is really all about: getting drunk.

But you do have a dilemma. You’ve got a test in your early class tomorrow and not only have you not studied, you haven’t even bought the book for the class yet. Way to go, professor. Do you:

12 I bet you want me to tell you that all your studying and self-sacrifice paid off, don’t you? That you aced your test and everything was great. Well, I’m sorry to tell you that sometimes things don’t work out the way you want them too.

Not only does that bastard of a T.A. give your test a C+, but had you of gone to the bar last night, you would have run into the person you would have ended up marrying. And you would have been extremely happy together, but now you’re just going to die alone. But on the plus side, it was an all-new O.C. that you threw your future away for, so that was nice. END

13 Your motto has always been “Live for the moment,” so here you are at the bar. Actually, your motto really is “Ass, grass, or cash, nobody rides for free,” but you don’t really want people knowing that. It’s a packed house tonight and the future leaders of the free world are getting shamelessly hammered. Should you:

14 So that demon named alcohol called and you came a-runnin’, didn’t you? You have one drink and might as well scream, “It begins again!” at the top of your lungs just as a fair warning to those in the bar who might get in your way.

One drink quickly turns into seven and before you know what has happened, you’re feeling no pain. And that’s when you see them. That hottie from your class earlier and goddamn if it doesn’t look like you two are making eyes at each other. Oh, doctor, this must be your lucky day. Okay, quick, come up with a strategy here. Do you:

• Walk over right now before this person sobers up or spots someone better, go to #16
• Do one last shot to really help yourself believe that you’re good enough for this person, go to #17

15 Water, huh? So you’re gonna be that guy. Just drinking water at the end of the bar. No, no, that’s totally cool, because if history has taught us anything it’s the people really enjoy the company of others who are cheap and uptight. Good luck with that. Oh, by the way, you go home alone. Big shocker there, huh? END

16 You have no reason to feel confident, but you do. Perhaps that’s the downfall in your approach. You walk with a certain swagger, which is probably not the best idea, because walking with a swagger is much more difficult than you originally anticipated and really should be left up to professionals.

Two steps in and you’re down on your face. You’re thoroughly embarrassed and if this was Rocky II and Apollo had just hit you, Mickey would be screaming for you to “Stay down!” He also might say something about crapping thunder, but that’s neither here nor there. Regardless, there’s no recovering and your night is over. END

17 That one last shot was perfect and now you’re just drunk enough not to be nervous, but not so drunk that you might tell this dime piece you’re terrified of rodeo clowns. The booze has also helped you stare vacantly and bob your head in time to this person’s ramblings about their major. Before you know it, the lights come on and the place begins to empty out. You’ve got to make a move quickly. Do you:

18 So let me get this straight? They were drunk, you were drunk, and you still couldn’t seal the deal, eh, Casanova? I have less game than anyone else on the face of the earth and even I could have made this work.

But, no, seriously, have fun on that “date” when the hottest person you’ve ever had a chance with is finally sober and gets a real good look at you in the daylight. I’m sure it will work out well. And that’s even assuming you got a real phone number, which you probably didn’t. END

19 You both stagger back to your place and luckily for you, your new friend has correctly interpreted “watch a movie” as “have sex.” Bravo, looks like there won’t be any sexual assault charges for you tonight.

There’s some more drinking and small talk and then an awkward, “Hey, um, have you ever seen an original script from The Office? Yeah, I have one…it’s in my bedroom.” And then finally, you get to see this person’s naughty bits, and, oh yes my friend, they’re delightful.

You fall into a blissful slumber next to your new friend, or perhaps they sneak out in the middle of the night, but either way, it’s been a great day at college. END

Related
New York Times Presents 36 Hours Inside Your Own Head
Mike Langley
What Your Favorite Children’s Book Characters Are Up To Now
Adam Wiener
Your Campus Tour
Walt Maguire
An Important Message from Your University President, Who Is Shocked That What Everyone Said Would Happen Is Happening
Emily Kling
Resources