Aren’t dogs just the best? Each one is a loyal and loving friend who will be there for you through thick and thin. But how much do you really know about them?

Here are seven incredible, but surprisingly true dog facts that will in no way whatsoever save you from the coal mine closing in your community.

1. All dogs are descendants of Joseph Smith.

Little known fact: After experiencing the “First Vision,” which would lead to the creation of Mormonism, Joseph Smith was transformed into a dog. Credited as being the first dog ever, Smith passed down genetic traits that made the dogs of today so badass. However, there is nothing about this fact that will prevent the coal mine from going bankrupt, thereby unleashing a plague of poverty and restlessness upon your hometown.

2. Dogs can communicate with each other using their sense of right and wrong.

Ever wonder how dogs always seem to know when another one is nearby? Turns out, they can detect one another just by virtue of their sense of right and wrong. Talk about a good boy! But this miraculous achievement will in no way alleviate the craving for more opiates once your painkillers run out, leaving you out in the middle of the night searching for that sweet heroin hookup.

3. A dog’s tongue is so long, it runs down its intestinal tract, out its asshole, and straight into another dog.

Think about this the next time your dog licks your face! Yet, somehow, it’s not as gross as the black shit you’re coughing up, the only remainder you have now that your days used to be so much better. 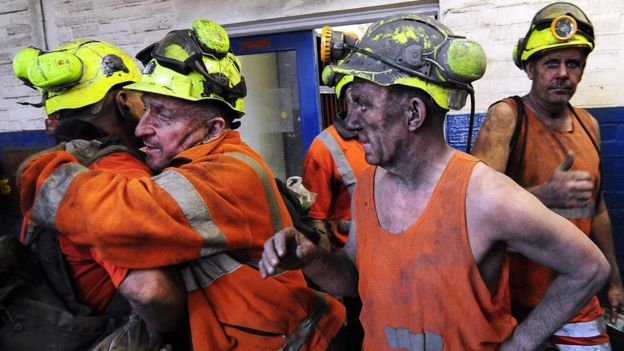 These miners could sure use a good canine cleanup.

4. When you dream about your dog, it’s really him.

Dogs have a unique ability to enter and leave the Dream Realm freely. Naked in front of the class? Better hope it’s not a dog school. As crazy as this is, it’s not near as crazy as how fast unemployment benefits run out in this country!

5. Dogs, like bees, can tell if you’re mildly unimpressed.

The true testament of a good companion: knowing without you saying that you’re mildly unimpressed with something. This will not be relevant at all when you’re grieving lifelong friends lost to the suicide epidemic rampaging through your community.

Poor little guy! It’s not that he likes eating his own shit, he just thinks it’s something else that smells like shit. Honest mistake. Want some completely unrelated advice? It doesn’t necessarily make you gay if you’re doing it to feed your family.

7. The only way to kill a dog is to show it its own reflection in a mirror.

That’s right, dogs are pretty much death-proof until you get them around any kind of reflective material. They are much less susceptible to the confines of mortality, than say, you under severe levels of stress following the completely unforeseeable collapse of the coal industry in the United States.

We’d Love to Offer You This Job, but I’m Afraid You Don’t Already Have This Job
Eddie Small
Sure, the Metaverse Is the Future, but Have You Heard About the Bubba Gump Shrimp Company?
Bradley Meyers
Now Here’s MSNBC’s Steve Kornacki with Our Basic Math
Pat Cassels
Every Single Website’s Holiday Gift Guide for Dad
Scarlet Meyer