The NFL isn't that different than professional wrestling. One is a bunch of morons on steroids with fake backstories, bad knees, worse tans, and adoring fans in prisons, trailer parks, and other concentrations of stupid. And then there are pro wrestlers. 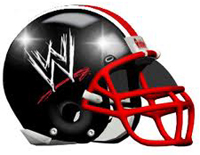 But what if the NFL finally took the plunge and actually tried to be a tenth as interesting and intelligent as professional wrestling? This is what it would look like.

ANNOUNCER: Welcome football fans to this Sunday's version of Sunday Night Football Crunchathon Sunday. We've got a lot of gridiron action here tonight on Sunday Night Football Crunchathon. Our main event is a tag team match with the beloved Indianapolis Colts teaming up with the equally as beloved New England Patriots. Once rivals, now like brothers. In fact, here's Peyton Manning right now, just out of the locker room. What do you think of tonight, Peyton?

PEYTON: Well Mean Gene, this one is for the fans. As usual.

ANNOUNCER: And how about your teammates? You used to hate the Patriots. 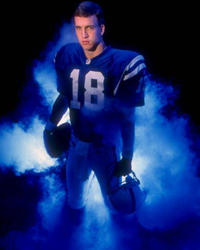 PEYTON: "Hate" is a strong word. I don't really hate anybody. Except anybody who badmouths the greatest country in the entire world, the United States of America. Tom Brady and I started training together. We're both champions, so we get along great. We're going to do it tonight for all our fans, and for America. And I hope your bald spot gets better, Mean Gene.

ANNOUNCER: Good luck tonight. Wow. What a bastion of class in this bone-bashing battle of behemoths. Now, the Colts and Patriots will face off against a vicious team comprised of another set of former rivals guaranteed to be the biggest douchebags in professional sports, the Dallas Cowboys and the Oakland Raiders. Did you feel that America? Did your collective skin just crawl? Mine did? And who happens to be walking out of the opposing locker room right now… none other than the hated Dallas quarterback Tony Romo. Tony, if I interview you, will you please not hurt me?

It's Jerry Jones! With the metal briefcase full of money! And he's storming toward the field!TONY: Huh? Nah. I'm saving my hate for those flag-waving pussies from the Northeast or Canada or wherever the fuck those cockboys live. Look, I'm kind of drunk, and I might have banged Hannah Montana last night, or Dora the Explorer, or one of America's sweethearts. But big fucking deal. I'll roll over and touchdown-fuck these wide-smiling cheesedicks in front of a sold-out audience and to the stupid viewers at home who just can't get enough of me and the Cowboys and the Raiders.

ANNOUNCER: Now viewers at home, usually we don't allow such crass language on our broadcast, but you know those rowdy Cowboys. So any final words before the four quarters of foot stomping, slobber knocking, teeth clomping—

TONY: Shut the fuck up already. Just know this: there will be new Heavyweight Super Bowl Tag Team champions tonight. Done and done. And buy my fucking t-shirts. Turds. 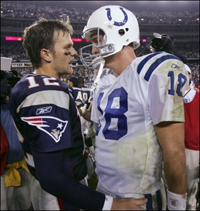 ANNOUNCER: Always a charmer, isn't he, America? Now let's get to the game. John Madden and Jerry "The King" Lawler, how's it looking over there?

MADDEN: Now this is just class on top of class. The Patriots and Colts are leading a prayer circle for retarded orphans and about-to-be-euthanized retarded pound puppies. It just warms my heart, and my turducken.

KING: I know this isn't the most popular thing, but I don't much care for orphans. Unless they're underage, double-sexual Thai orphan prostitutes. But hey, what do I know? Let's see what the interesting teams are doing.

MADDEN: It's something I've never seen before, King…

MADDEN: The Cowboys and Raiders defensive team are bringing giant, long wooden boxes onto the field.

KING: You didn't know this would be a Last Man Standing Coffin-Match Super Bowl Game?

MADDEN: I think we may have to talk with the commissioner on that one.

KING: He's busy with Hustler girls right now. But look at that, haha! The Cowboys just stole the lid off the Colts' Gatorade.

MADDEN: And now it looks like…yup, the Raiders are dumping some sort of mystery powder into it. How do the refs not see that?

KING: They're in the prayer circle.

MADDEN: Should we say something?

KING: Nah. It can't hurt ‘em. Just a friendly game of Sunday Night Football Crunchathon. And it's time for kickoff.

MADDEN: Wait! Look at that. Tony Romo's on the Cowboys/Raiders sideline. He's motioning for a ref. What's that Romo's carrying?

KING: It looks like a giant birthday cake, John.

MADDEN: By good golly, it is. I wonder why.

MADDEN: Maybe that boy does have some sportsmanship in him.

TONY: Hey Peyton. I know we've hated each other for a long time. And I tried banging your wife. Then I actually did it. But hey. I know you're a good guy. And it's your birthday. So why don't we make this a fair game.

MADDEN: A peace offering? Before a game? I don't believe it.

KING: Peyton's running to the field. What a maroon. 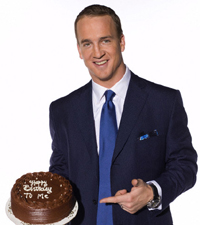 PEYTON: Wow, I didn't think you'd remember, Tony. You're such a swell guy.

TONY: Make sure you get really close and blow out all the candles, buddy.

PEYTON: Gosh dang, I thought this was going to be an unpleasant birthday. But I knew God had a plan for—

MADDEN: Romo pushed Peyton's face into the cake. Now the Cowboys and the Raiders are beating Peyton! Oh the humanity! It's a massacre.

KING: Haha! Well, serves him right. That's the oldest trick in the hieroglyphs if you ask me.

MADDEN: And the refs aren't letting the Patriots or the Colts onto the sideline. Peyton can't tag them!

KING: It's a legal move, John. He came to the Cowboys/Raiders sideline, so he knew what he was getting into.

MADDEN: The boy thought it was a birthday cake, not a murder show. My oh my, in all my years of broadcasting, I've never seen such a sickening stunt.

KING: Ha! I think it's kind of funny!

MADDEN: They're hitting poor Peyton with chairs! Helmets! Those tables with a bunch of cups on them! Look at that! A Raiders linebacker picked up a cameraman and hit Peyton with him! Now they're pulverizing him with the Dallas Cowgirls' pom poms! The ref can't do anything about it! 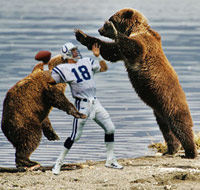 KING: This is a Sunday, Bloody Sunday Night Football Crunchathon, that's for sure.

MADDEN: Look at that! Rappelling from the roof! Tom Brady! Carrying an American flag! The Raiders and Cowboys are frozen in fear.

MADDEN: I haven't seen fear like this since Hawaiian UltraBrawl 18: Brett Favre vs. Andre the Giant, back in the Mesozoic Era of Professional Football Wrestling.

KING: Brady is helping Peyton up. What a team of do-gooders!

MADDEN: More dignity in those two gentlemen than both Oakland and Dallas put together if you ask me.

MADDEN: Let's let the slobberknocker of the night get started.

KING: But the Pats and Colts have a lot of making up to do.

MADDEN: During that free-for-all fracas of frightening fury, the Raiders and Cowboys scored 17 unanswered touchdowns.

KING: Wow! Peyton just scored a touchdown, safety, and field goal! One after another! After that beating!

MADDEN: The Raiders and Cowboys are just laying there! Letting it happen! Too beaten from the American spirit of Peyton Manning and Tom Brady! One more touchdown and he can pin those villains' venoms!

KING: I think you meant… wait! From the owner's box! It's Jerry Jones! With the metal briefcase full of money! And he's storming toward the field!

MADDEN: The ref can't see him! He's witnessing some of the best football entertainment in history!

MADDEN: Right at the one-yard line! I can't believe it! Oh why couldn't the ref do something? The whistle has been blown! The Colts and Pats have been pinned by the dastardly duo!

KING: If you ask me, I think Raid-Boys won fair and square, against the squares. Hey, that's pretty clever. I'm going to start using that all the time. Raid-Boys! I'm a genius!

MADDEN: That's all we have for Sunday Night Football Entertainment Crunchathon. Catch us every Sunday for our regular broadcast and call your friends and get ready for our next Pay-Per-View event: Sin Sin in Cincinnati 17, when the Bengals take on DeGeneration X for the undisputed championship of the AFC Central!

KING: It's going to be a hardcore barb wire game. With a bunch of light bulbs and strippers.

MADDEN: Fun for the whole family. Goodnight, America. Say your prayers, take your steroids, and skip all the schoolwork you can.

Related
10 Ways My New Relationship Is Nothing Like the Ryan Lochte Gas Station Scandal of the 2016 Rio De Janeiro Olympics
Madeline Goetz
A Sweet Sixteen of Things More Likely to Happen to You Than Picking a Perfect March Madness Bracket
Jen Freymond
13 Things I, a 33-Year-Old Man with Zero Interest in Football, Find More Exciting to Watch at a Super Bowl Party Than the Game
Jonathan Motney
Resources