The Five Most Ridiculous Sunglasses in Hip-Hop

Part of being a celebrity with thousands of adoring fans is being able to set trends and styles that your admirers will follow. The idea that you're so rich and famous that you can push the limits of what's normal and try to revolutionize fashion has worked for some celebrities, but failed for others.

What's even worse is that this sense of obscenity has pushed past the limits of shirts and shoes and come to poison to style of sunglasses. What was once an innocent tool invented to protect your eyes from UV rays has been transformed into the most grotesque fashion statement in history.

Here are the artists wearing the five most ridiculous glasses in hip-hop today. 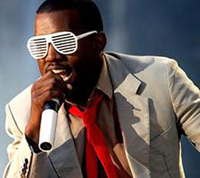 Who would have thought that being the voice of a generation makes it so difficult to see?Of course, when you think about dumb glasses, you think of Kanye West, the self-proclaimed “voice of our generation.”

Kanye West's glasses, or as I like to call them, the Peeping Tom Glasses, are intended for the person who takes pleasure in going half blind, while still enjoying the feeling of peering through someone's window shades. God forbid you ever enter the club in them—provided you're allowed in after mistaking the bouncer for a hooker—and have to navigate around a crowded, poorly lit dance floor. After twenty minutes of stumbling around, knocking over drinks and walking in the wrong bathroom, you would blindly hit on what you thought was a cute girl, only to find out it's really a subwoofer.

What's worse is that once a second person enters the club wearing a pair of those shades, the two people transform from hip trendsetters to unoriginal assholes. Luckily, the pattern on the glasses prevents the two from locking eyes, saving them from the humiliating realization that they're both unoriginal douchebags. 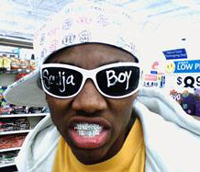 There is truly nothing more gangster than the candy shop.I hate Soulja Boy. I despise him. I loathe his lack of talent, whiny ass voice, and fake lifestyle. His song “Crank That” not only polluted dance floors everywhere, but also tarnished the name of one of the greatest superheroes of all time.

Instead of creating his own design of glasses like Kanye, Soulja opted to buy a pair of huge white sunglasses and then write all over the lenses. Does he even realize why they put glass there? It's so you have a clear line of vision. He might as well have written his name on paper and taped it over his face. Instead, he draws his name all over these glasses, obstructing his view as well as his ability to make good decisions. Can you imagine driving with sunglasses like that?

Friend: Dude why are you putting your blinker on?
Soulja: I'm gunna pass this massive letter “S”.
Friend: What?
Soulja: This asshole driving a backwards S keeps cutting me off.
Friend: Dude I think that's your glasses.
Soulja: Nah dawg, it's thi—WHAT THE FUCK! (swerves)
Friend: Holy shit, what?
Soulja: The words “CRANK DAT” just swerved right into my lane!

If we're lucky, Soulja Boy will crash his car, hopefully shattering his glasses and career.

I'm really not sure what Lady Gaga's deal is. She makes popular dance floor hits, but her sense of fashion is beyond questionable. She dresses like a real life combination of mix-and-match Barbie and Ms. Potato Head. She's on top of the “what not to wear” list almost every day, but that still didn't stop her from wearing bubbles on her Rolling Stone cover shoot.

These glasses are obviously another obscene fashion statement, but that still doesn't make them acceptable. Are they TVs? Or are they just a metaphoric mirrors reflecting poor choices? These glasses seem very helpful if you want to block your eyes from the sun without exposing your forehead, check bones, and ears to it. The only practical use I can see for these glasses is if you're piloting a jet plane, or if your job involves hours of staring at solar eclipses. 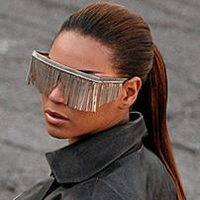 “What's that? Sorry I couldn't hear you over the sound of me being a diva.”Beyoncé is unarguably one of the most talented performers of our time. She has worked very hard for her fame and deserves the utmost respect.

That is, until she put on these heinous glasses.

In her song “Diva,” Beyoncé describes how a diva is a female version of a hustler; of a of a hustler. And by all means Beyoncé is the definition of a diva, alongside Mary J. Blige, Lil' Kim, and Chris Crocker. It's as if when faced with Kanye's Peeping Tom Glasses she thought, “Window shades? I'll show you window shades!” Not to be outdone, Beyoncé can be seen in her “Diva” music video sporting these obscenely awkward glasses that look less like eyewear and more like a hippie's beaded curtains.

What's realistically wrong with these shades is that they sway as one walks—or in Beyoncé's case, aggressively struts. This may seem cool, but it's actually very dangerous when dangled centimeters away from one's cornea. All it takes is one stray metal strand and Beyoncé could become the elitist version of a pirate; of a of a pirate.

When they finally put the word “wtf” in the dictionary, next to it will be a picture of Flava Flav. What is this guy? I realize he became famous as the hype man for Public Enemy, but is that it? I think he remains the only individual in hip-hop who truly has no talent. He's like if you took Lil Jon, subtracted the Crunk Juice, and added a receding hairline. My honest question is why and how this guy became famous, and then lived out the fantasy of having girls spit on each other over him.

With his sunglasses, Flava Flav continued to represent his style of “things I hope will catch on but never do.” Clock? Check. Viking hat? Check. Now all we need is some sort of dysfunctional eyewear… EUREKA! (And yes, Flava Flav definitely yelled “Eureka.”) With this style, Flav was trying to say, “I like having the sun out of my eyes, but fuck that arm that goes over your ears.” As a result, they created this set of headgear that makes him look like a villain from Power Rangers. This, combined with his greasy skin and unkempt hygiene, gives him the overall appearance of a housefly. The only difference is that houseflies die within 24 hours, and Flava Flav is still clinging to his 15 minutes.