They're new, they're obscure, they don't even exist. But that doesn't stop me from sharing them with you.

If you're looking at the name and thinking, "Guided By Voices meets Neutral Milk Hotel," then BINGO! No, actually PFD are closer to an unholy (and very entertaining) 3-way marriage of Das Racist, Fleet Foxes, and Neil Diamond—with a pinch of Neu and maybe Boris thrown in. 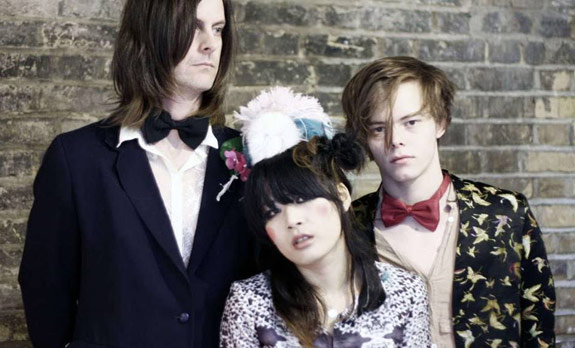 Plus, the upcoming self-titled album's reported cover art (which can only be described as "fluid" by words alone) is kind of a mindblower. Definitely worth the reported $42.50 cost of admission. Add the limited-run babyshit brown/green vinyl, and BAM! Instant aesthetic masterpiece. You may not like it, but you're supposed to (new album and title TBA).

2. Sheldon Roth and the Papal Cuts

When you "take on pretension as theater and concept," as Sheldon Roth is wont to do in his live shows, you had better damn well do it right. And that he does. The ubiquitous grand piano is oft lounged upon but never played; the spotlight dwells upon an empty stool. Roth's shadowy backing band, the Papal Cuts, never fully reveal themselves but for gauzy silhouettes posing behind a backlit muslin curtain… hell, they might just be mannequins for all we know.

But Roth's wildcard always was and remains his distinct vocal warble, which falls somewhere between Tiny Tim, John Cale, and Paganini. If his latest disc, "The World for You is Now My Soul Inside the Mouth of a Thousand Elephant Suns Awash in Static Silent Orgasm, or How My Heart Has Won the War of Lost Pawns Upon the Bloody Meadows of Singing Silver Magi" (still streaming at Paste.com) is any indication, Roth will be a rising indie star to watch. In fact, this quirky-yet-accessible artist is a shoo-in to get snatched up by a major and turned into the next Antony.

Ignore him at your peril, people.

What can you say about a newly anointed dubstep dynamo who insists upon total anonymity, has never released a note of music to the public, and refuses interviews? I say, this is maybe the most anticipated artist of the year.

His/her/its TBA debut, rumored on an unofficial Facebook page to be tentatively titled "…" (or, as some in the know have already mythologized, "The Ellipses Album"), promises to be a breakout hit among dubstep, trance, krunk, and ambient fans alike. Reliable messageboarders have also posited that a limited-edition version of the album will be issued on a glowstick-mounted USB thumb drive. Once we find out where this will be made available (or if), we'll let you know.

Their bio points out that this 22-piece (!) combo hails not from Pennsylvania but rather from Regina, Saskatchewan. Point taken. Indie cred granted for nothing else if not the fact that Pitttsburgh features a drummer, a single synth player/singer, and 20 backup singers who all sing the same part in unison. And, believe it or not, it's even more electrifying in person than on Pitttsburgh's debut album, Possibolices (March 15).

Beard Rock, depending upon your hipster level, is making a real comeback. You may remember Jakib Justin Williams, the facial hair behind The Loam Sunshine, from his rowdier days in emo-shysters The Piss Klub. Well, gone are the purple body paint and the crying jags. Also behind Williams are the fanny-pack-littered stages (well, he did ask for it) and loud guitars.

Once Williams grew out his fire-red facial finery and began writing pastoral instant classics like "A Home Is a Place for My Cuddle Bear" and "Ode to Merlin Olsen," the game changed. Now, Williams finds himself the soft, yielding, pillow-like spearhead of a new indie-folk-platonic-hug movement that can't be denied by even the hardest nosed Pitchfork 4.4-star-doler-outer. All signs point to his upcoming "Willow O'er Valley Mine, Aye" double album (one side with gentle acoustic accompaniment, the other a'capella) taking Williams to an even higher (albeit cushy, calm, and soft) peak (April 1).