Childcare Alternatives for the Morally Bankrupt

Not all of us have the luxury of being gay, infertile, or hideously unfuckable. So for the rest of us, life is a series of attempts to reproduce unsuccessfully. And while it's perfectly safe to spend your whole life in a locked room firing off lonely orgasms into the night, it's no way to live. Eventually you have to venture out into the world and get laid. The Libido is a powerful force, and it cannot be reasoned with. If your libido told you to touch every stove you saw then you would do it, and not always with an oven mitt. Because of this, we continue to mindlessly rut like coked-up monkeys on Viagra, despite the ever-present oh shit, baby! factor that looms ominously over our heads as we roll around drunk and naked with pretty much whoever (whomever? whatever). An evil smiling fertility god perches on your bed, watching. WIC vouchers in one hand. Enfamil in the other. 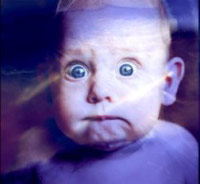 So anyway, you're preggo. Now what? Sure, you could always take up drunken staircase diving as a hobby or get a job as a Hollywood stuntwoman, but these are drastic solutions that require a lot of initiative early on in the pregnancy. You could try to find an abortion clinic that's not being torched by Southern Baptists or Templar Knights, but that's easier said than done. And let's be honest: you're a lazy procrastinator. Maybe you forgot to take your pill. Maybe the guy didn't pull out in time. Hell, maybe you have a secret tunnel that goes from your navel straight to your baby-maker. Think about that the next time someone sprays a load in your belly button. It's only impossible until they name a syndrome after you.

So now you've got a baby. What do you do? Here are some ideas. You're not going to like them. Guys, sit this one out. You won't get a say in it. Plus, you can leave anytime.

1. Sell Your Baby on the Black Market 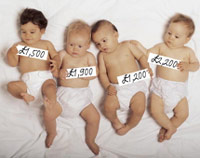 This one's a no-brainer. Ask around, go door-to-door, put up some flyers, Ebay, Craigslist, whatever. Stand around in a Walmart parking lot. It's happened before. Try soliciting adoption agencies. Talk to the people in the waiting room. Everyone there wants a baby, and no one wants to be on the bottom of the waiting list. Offer them a used kid on the spot. Set up a payment plan.

Got friends with babies? Sell those, too. Package deals and variety packs. Everyone loves a bargain.

God you're a horrible person. What's wrong with you? 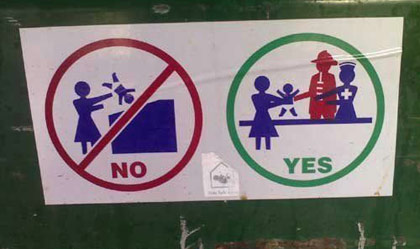 3. Tattoo the Mark of the Chosen One

Now we're getting creative! But this one requires a great deal of preparation and showmanship. First off, you'll need access to some tattoo equipment and at least a basic working knowledge of how to use it. Pick a symbol, something cryptic, and tattoo it on the baby's hand. Doesn't have to be perfect, just has to look like a birthmark. Astrological symbols work well for this, and will be easy to tie into the prophecy that you'll need to make up in order to seal the child's fate. Something like, "Beware the Virgo child, son of slut, bastard of the night. He shall become a great warrior, and rise up to slay the mayor." Or she, whatever. It's a modern prophecy, it's hip.

Next you need to find an old lady with some striking deformities and a glass eye. This is your "oracle." The third thing you're going to need is about ten hits of acid. DO NOT EAT THE ACID. This is for the mayor. It will make your prophecy far more believable when the oracle presents it to city council. Now that the mayor is dosed and suddenly made aware of the danger he is in, he is sure to assemble his personal militia to action. They will go to every home in the city, checking infants for the mark. But of course you, the loving parent, will place the baby in a wooden chest and toss it into the ocean where it can be safe from harm. It worked in Clash of the Titans, it should work for you. 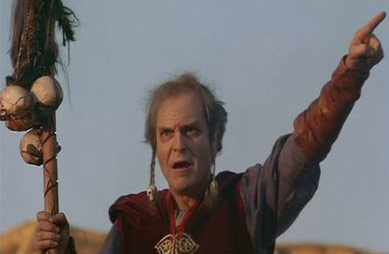 Your child will be discovered by a kindly woman on a faraway shore, where he (or she) will be trained as a beastmaster and given a boomerang made of razors with which to slay the corrupt hordes of the evil mayor upon return to his (or her) place of birth, as foretold. Be advised that he (or she) will find you, and will demand an unreasonable amount of money in the name of child support. Also, the child will kill you. So double-check your black market options before you commit to this one.

4. Invite Storks to Reclaim Your Baby 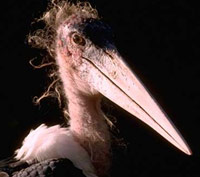 That's right. Everyone knows babies come from the stork. Scientists still aren't sure of the exact method, but most people believe that the stork steals your eggs while you sleep, then fertilizes them deep in his mountain lair. Once the baby starts crying, the stork gets bored with it and drops it down someone's chimney. Because of this, it is especially dangerous to be born in the winter. It's a goddamn fireplace. Think about it. Storks are throwing your babies into random fireplaces. Are you comfortable with that? Because if you are, this is the perfect solution.

First, find a stork. Don't ask me where to get a stork. Tie said baby up into a soft blanket. Train the stork to carry the baby and drop it down someone's chimney. Problem solved! Might want to do this a few states away from where you actually live.

Times are tough. The economy is bad. The world is grossly overpopulated. Sure you want kids, but not for another…oh, hundred years or so.

Look, children are our future, so why should they be stuck in the present? It's up to us to send them to the future! And just think how much money you can cram into your frozen child's savings account in a hundred years! He'll be a billionaire in middle school! 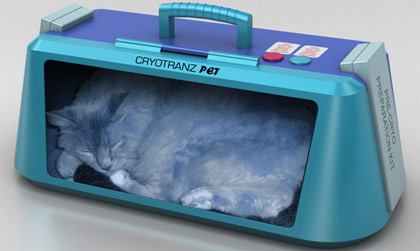 Now, there are some drawbacks. For one thing, cryogenic sleep cribs cost an ungodly amount of money, although they are tax-deductible. And second, I'm not certain that they actually exist outside the realm of science fiction. So you might want to look into that.

6. Make a Sacrifice in the Temple of Moloch

You think babies are expensive? You should see what the lawyers will charge if you think you can pull this one off. And I ain't talking Johnny Cochran…you better have Darth Vader, the evil supercomputer from 2001: A Space Odyssey, and sweet fucking Satan in a Sunday suit. Bring the guys from Hellraiser while you're at it. Believe me…this WILL go straight to court.

Still on board? Okay, you sick fuck, don't say I never warned you. Here's what you do. Start up a church in your neighborhood. Not just any church, though. It's gotta be the Temple of Moloch. Here's why. Thanks to the third or fourth or whichever fucking amendment deals with religious whatever, you can do anything as long as it's in church and your god says it's cool. Indians get high and trip mushrooms and peyote all day long, because they worship badass drug-crazed werewolves that live in the sky and piss acid rain on the white man whenever they drink firewater. And that's what freedom of religion should be. You, on the other hand, will be exploiting the constitution in order to burn babies as ritual human sacrifices to an ancient Babylonian demon. You disgust me. 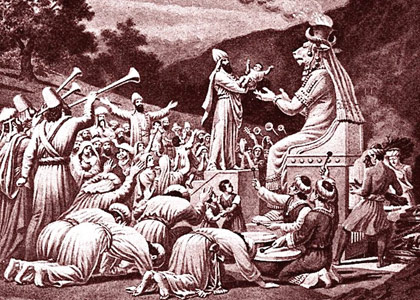 Or, you know, maybe just get a babysitter.