Man Fiction: Books About Shooting People in the Face

Vintage pulp literature guaranteed to put hair on your chest.

Everyone at some point in their life has seen a romance novel. And everyone knows that romance novels are stupid pieces of literary trash marketed towards sad, lonely old women with no lives. But what about men? We also enjoy trash. But we require something a little different for our needs. We require the polar opposite of romance: mindnumbing violence, and lots of it. Don't argue with me. You'll take your goddamn gender stereotype and like it.

So what exactly qualifies a book to be in the elite genre known as men's adventure? Well, for starters it's generally part of a series of books, often ghostwritten under a fake name and churned out at lightning speed, revolving around a single character or group of characters. The hero is almost always some sort of hitman, secret agent, mercenary, loose cannon detective, bounty hunter, or vigilante. He should have a badass nickname like the Executioner or the Destroyer or the Butcher. Pretty much any type of something-er name will work. And if it's true to its old school pulp roots, it should have the gaudiest, sleaziest, most over the top cover art imaginable. 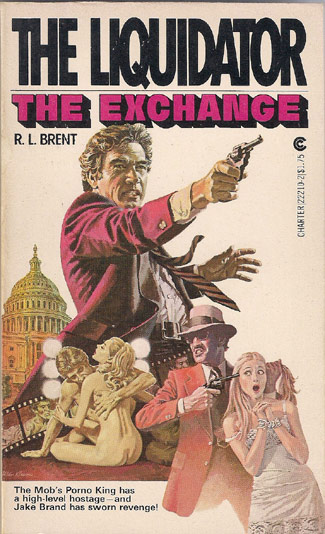 It should also have… 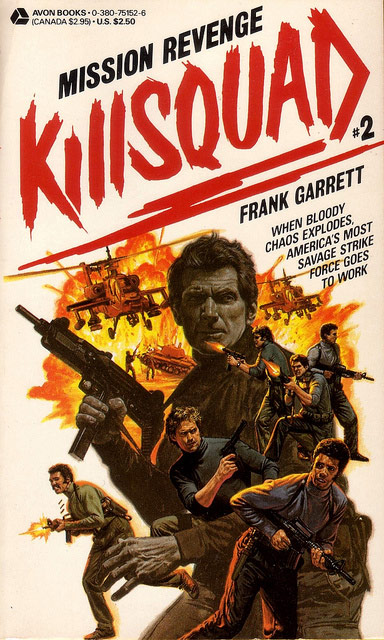 If the book you're reading doesn't have car chases, shoot-outs, massive explosions, war flashbacks, Mafia hitmen, Columbian druglords, KGB death squads, and helicopter fights, then you need to throw that book in the trash because it sucks and is clearly not worth your time. 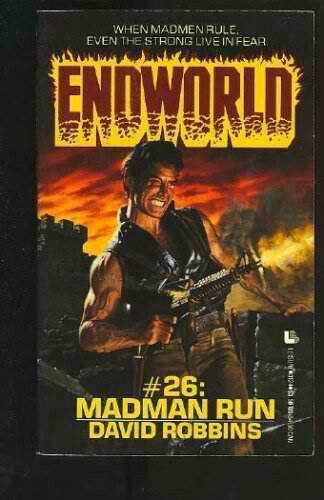 You would be amazed at the seemingly endless number of different ways that someone could vividly and poetically describe the simple act of being shot over and over again. Whether it's a crimson flower blossoming in someone's throat, or the top half of someone's heart being blown out their back in a hot wet burst of blood and buckshot, you'll get a front row seat for all the gory details. 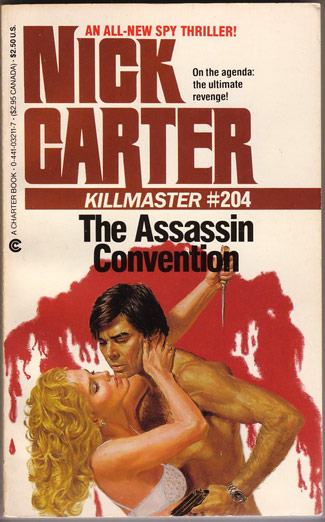 In man fiction, the hero always gets the girl. Then he leaves that bitch in the dust because he ain't got time for no women folk, no matter how ample their bosoms might be. And make no mistake, the bosoms will be ample and the nipples will be perpetually erect. Why? Because we like our women tits first, that's why.

And if they turn out to be terrorist spies after our hero gives them the old in-out, then that's a damn shame because now he has to kill her. Hey, it happens. Of course, if she's not a spy, she'll probably get killed anyway, but at least she'll be avenged. Man fiction is big on vengeance. 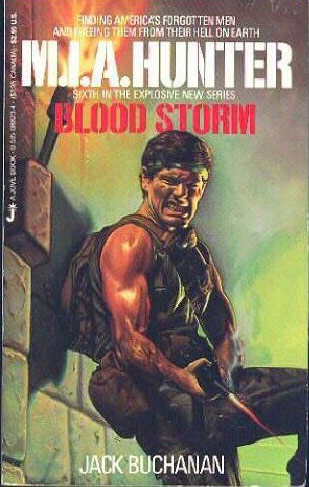 Because fuck you, hippie, that's why. 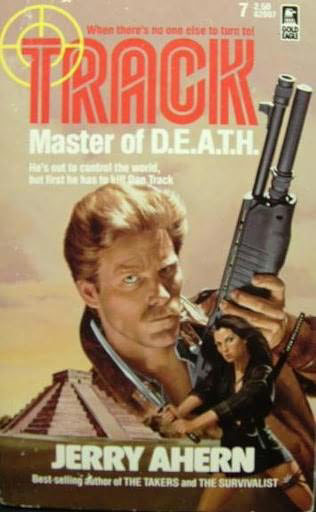 Another classic element of man fiction is the concept of gunporn. What is gunporn, you ask? It's exactly what it sounds like: gratuitous descriptions of exotic firearms rendered in explicit detail. In the most extreme cases, the guns are often given more description than the actual characters in the book, if the characters are described at all.

But really, who needs to know about some worthless jackass and his strong jaw line, high cheekbones, aquiline nose, steel blue eyes, and whatever the fuck a sensitive mouth is supposed to look like when you're staring down the 24-inch barrel of a Russian made Dragunov SVD 7.62mm sniper rifle with a 10-round detachable box magazine and a muzzle velocity of 828mps? Exactly. 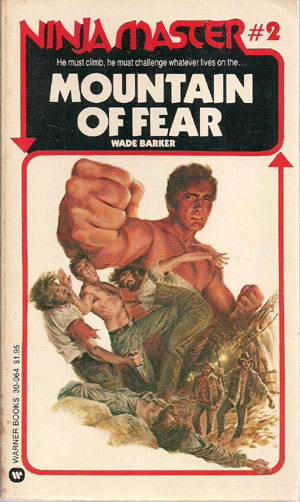 A truly great hero should be not only a master of weaponry, but of hand-to-hand combat as well. Maybe he trained with Buddhist monks and Green Berets. He will probably use martial arts styles that are so esoteric they must be written in italics. Maybe he is a master of tae-kwon-do, jui-jitsu, shito-ryu, kiai-jutsu, and gymkata. More importantly, he should be able to rip a guy's jaw straight off of his face with one solid spin kick. Otherwise, what's the point? 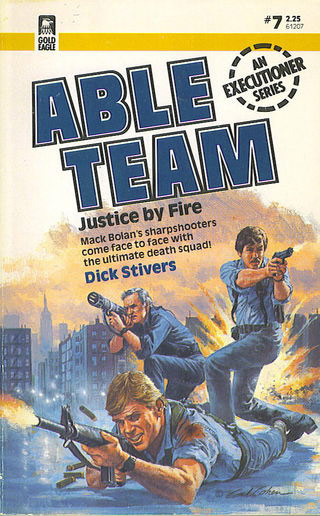 Crime is everywhere and the gangs are out of control. The politicians are all corrupt and the cops are all working for the mob. Neighborhoods are covered with trash and graffitti. Not to mention all the goddamn punks and hookers with all their loud music and Satanic drugs. Everyone is addicted to crack or cocaine or heroin, depending on what decade it is. If only some decent upstanding citizen would go on a Charles Bronson-style rampage and clean up the streets, life would be so much better. And just so we're clear, "clean up the streets" is a euphemism for "shoot everyone." But you knew that. 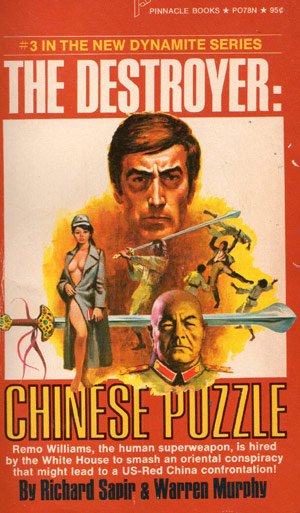 When you're a globetrotting mercenary adventurer being paid by the CIA to covertly execute foreign dictators and unsanctioned drug traffickers in third world shitholes, you've got to be savvy to all the intricacies of bashing people based solely on their nationality. Why? Because they're all the enemy, that's why. If they weren't, then you'd have no reason to be in their country in the first place, right? Right. So they must be assholes. Just make sure to bang the hottest girl in the village before you napalm it. 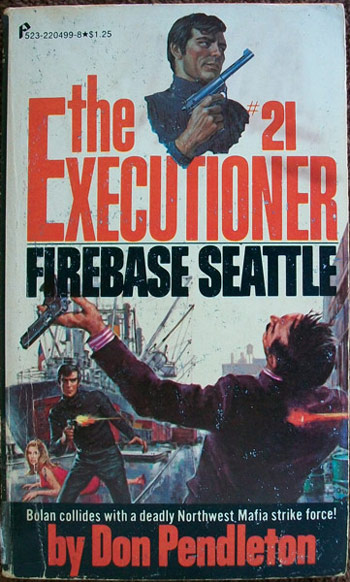 There's not a whole lot of grey area when it comes to the moral compasses of the heroes of men's adventure novels. All bad guys must die. With a vengeance. Because guess what, pal, criminals don't get rehabilitated in prison, they get rehabilitated in hell after they're goddamn dead. If you want some bullshit courtroom drama about a bunch of scum-sucking shitbag lawyers and their shit-eating scumbag clients, then you need to take your commie-lovin' ass over to the John Grisham section because man fiction doesn't give a damn about all that legal mumbo-jumbo.

A MAN FIGHTING A SHARK WITH HAND GRENADES!!! 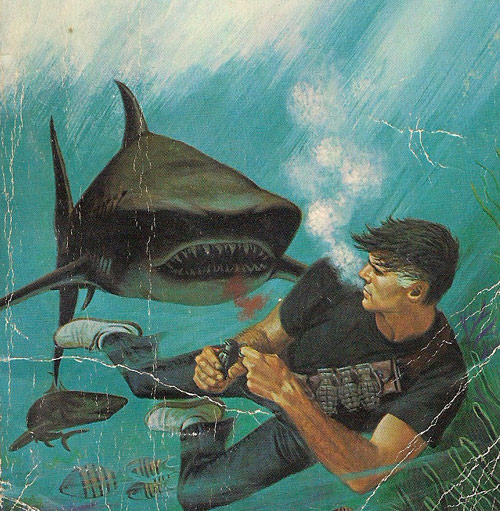 It happens more often than you think. 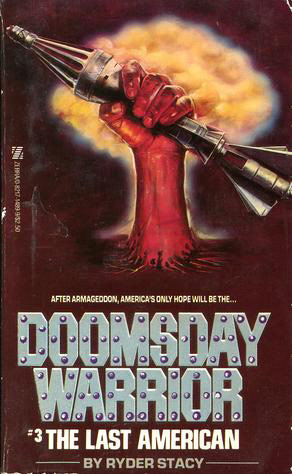 Nuclear terror comes in two flavors: impending doom and post-apocalyptic. The former involves one man saving the world from crazed missile-hijacking terrorists using the latest stealth technology and military hardware; the latter involves one man fighting off crazed mutant bikers for a can of radioactive peaches using only a sawed off shotgun and a turbo charged muscle car. 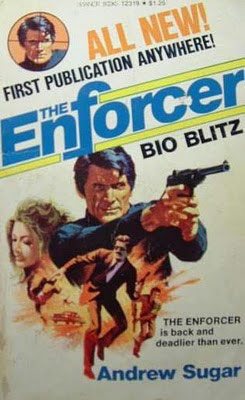 Jason Alexander Graham Bell is a psychic clone warrior for the John Anryn Institute, a super secret private organization dedicated to "fighting collectivism and crime," whatever the hell that means. His arch enemy—a criminal mastermind who never seems to actually commit any crimes—is a man called Lochner. Lochner has at his disposal an army of murderous brainwashed feminazis from a women's activist group known as CLAW (Complete Liberation of All Women). Also, killer insects. At one point in the book, the hero sets himself and his girlfriend on fire in order to avoid being eaten by ants. This was right after he got in a car wreck caused by a thousand specially trained kamikaze caterpillars that ambushed him on the highway. In another scene, a man is almost assassinated by termites that cause his house to collapse on top of him. The downtime between insect attacks and laser fights is filled with awkward sex scenes and philosophical monologues about why feminists are dumb. 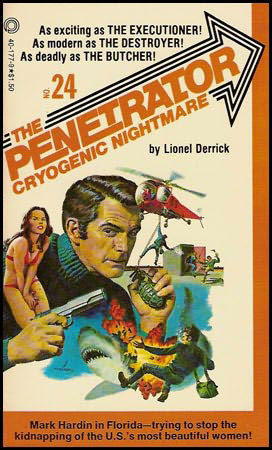 Mark Hardin is a globetrotting do-gooder who's constantly on the run from the law due to his vigilante lifestyle. He has a dart gun, a shitload of explosives, and bulletproof pants. He's up against a big black pimp named Preacher Mann who is abducting beautiful girls in order to cryogenically freeze them and rent them out all over the world as sex slaves. At one point in the story the Penetrator blows up a shark with a grenade. He also gets an innocent young girl kidnapped for helping him. He makes no attempt to rescue her, just assumes she's already dead and skips straight to the vengeance. Amazingly enough, there are no sex scenes in this book despite the highly suggestive series title and semi-phallic logo. However, a girl does get her tits slapped around a little. But menacing tit slaps, not sensual tit slaps.

A robot and a Navy SEAL travel the world killing druglords for the CIA. It's like Robocop, Terminator, and Commando rolled into one.

The saga of a nomadic post-nuke survivor who roams the war-torn countryside in a bitchin' armored van full of machine guns. He spends his days and nights killing marauder scum, helping out the little guys, and banging every hot chick that survived WWIII.

The one that started the paperback vigilante craze way back in 1969, and just about the only series still going strong. The quality level is all over the place due to the number of different authors involved, but there's a lot of good stuff out there. Sadly they fired all the illustrators years ago in favor of using janky photoshop covers, effectively killing any pulp vibe the series ever had.

Normally I avoid westerns on account of the fact that most of them are nothing more than boring horse-romance yarns that go absolutely nowhere. Edge is one of the exceptions that reads like a spaghetti western grindhouse flick—high on violence, low on sentiment.

Six ruthless death row inmates, three black and three white, are selected to form a covert anti-terrorist strike team. They are forced to put aside their racial differences and band together… to kill Arabs.

It's just like the A-Team, but without a black guy. In fact, I find it impossible to fully enjoy these books without mentally narrating them as Mr. T. and changing Schwarz's name to Hannibal. That being said, these books are a lot of fun and have a good mix of B-movie campiness and skull-crushing violence.

A western series about a guy named Ruffin T. Justice. So, yeah. Lots of purple-prosed sex scenes and affirmations of just how tough old Ruff Justice is. And if the covers are to be trusted, he looks just like Danny Trejo, only prettier.

This 70 book men's adventure series from the seventies and eighties is so fucked up and crazy that it deserves its own article. So stay tuned for Man Fiction 2: Rosenberger's Revenge.

Well, that's all for now. So happy reading, men, and ladies-who-think-as-men… and try not to drive all the prices up with your sudden demand for cheap trash. No need to ruin it for the poor people.