9 MORE of the Nerdiest Cocktail Recipes

A fantastic drink collection based on video games, sci-fi movies, and Magic.

A while back I explored several of the internet's absolute best nerd-themed cocktails, because I have debilitating alcohol dependency issues, but you bastards just want to watch me drink myself into oblivion while I make butt and penis jokes for your amusement.

I am more or less okay with this fact.

So continuing in my favorite style of writing (using as little effort as possible, while brickfaced) I've decided to come to you once again delving into the world of nerd-themed alcoholism, while simultaneously holding out hope that the scientific community pulls out the stops and buckles down on developing an artificial liver before mine finally drowns in a thick mire of cheap liquor and poor decisions.

(Many thanks again to nerdy drink super-site The Drunken Moogle for these indulgent beverages.) 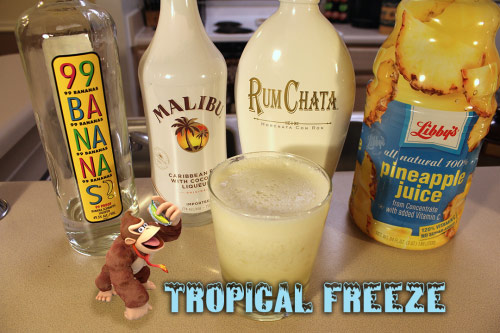 I'll freely admit to not having played a Donkey Kong game in years. Like, the last one I played was on the Nintendo 64 and since then the only time I've touched the character is to do grab and suicide jumps in Smash Bros. So the simple reason for including this drink on the list is because I'm a giant sucker for tropical drinks and this one sounded absolutely delicious.

Anyone who knows me is aware of my feelings on anything coconut (it's like the white flakes from the Devil's own pubic dandruff), but when mixed with an assortment of other fruity flavors, I find it quite palatable, and in fact, I enjoyed this drink so much that I found it palatable about a half dozen times. 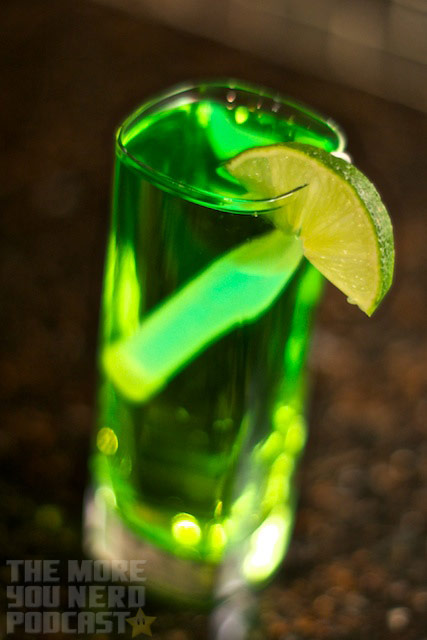 These days I like to mix and/or order gin and tonics whenever I can, because I really like to put it out there as quickly as possible exactly how bland and uninteresting I am as a person. It's cool though. I like being lonely. Don't worry about it.

So when someone comes along and combines my clearly unhealthy association with anything alcoholic (but especially gin and tonics) with my in all honesty probably even more unhealthy obsession with cutesy joke names, well, we have a god damned winner with the adorably named Star Wars-themed cocktail, the Qui Gon Gin and Tonic.

Named after the laser drumstick-wielding Liam Neeson character from the movie equivalent of a root canal that was The Phantom Menace, this drink puts a lovely spin on the normal gin and tonic formula by dumping a healthy sploosh of Midori into the mix, which, if you've had it before, you already know why its addition is a good thing.

(A Doctor Who cocktail) 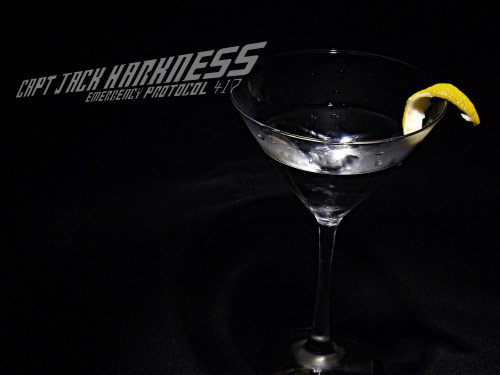 This is a pretty simple drink, and despite the weirdly aggressive ways people defend whatever they consider the "correct martini," they aren't actually that hard to make.

Honestly I pretty much just wanted to include this one so I could fan-girl about how awesome Captain Jack Harkness is (so awesome) and piss off die-hard martini fans (seriously—actually a thing that exists). Also, the drink is super strong, so even if you're totally "straight" or whatever, after a couple of these you'll probably be looking at the good Captain in a whole new light (that is to say, without pants).

(A Magic: The Gathering cocktail) 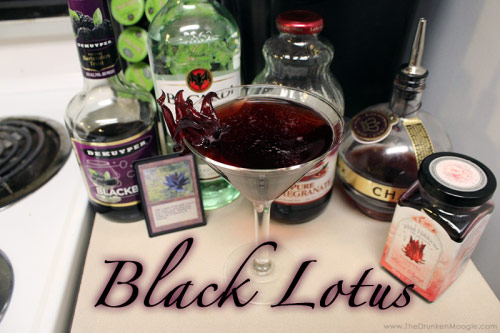 This cocktail is a bit difficult to make, but mostly only because you have to find a way to travel back to the thirteenth century for the last time half of the ingredients were actually sold anywhere.

I didn't have any hibiscus flowers, fucking obviously, but really, that's only aesthetics to make it look like the drink's namesake, and you can do just fine without it. Or, at least I assume. I mean, maybe the flower sparks and glows and takes on a whole new flavor after the flower is placed inside and I'm totally missing out. But as of now, it smells and tastes like something you would expect to find in Snape's potions class, but that is apparently a good thing, because it tastes neat. 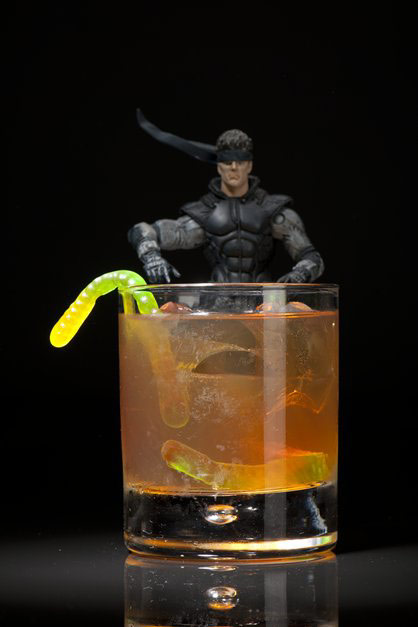 I'm not gonna lie, I haven't really played many of the Metal Gear games. I picked this one more or less 98% because of the name (see: obsession with cutesy joke names in the Qui Gon Gin and Tonic entry above). I think it's goddamned clever. Even if you barely know the game and its myriad assortment of "snakes" (seriously, it's like the reptile house at the zoo), then you'll find this funny. Or, even if you have no idea what a Revolver Ocelot is or why that one giant robot has a crotch mounted dick laser, and just appreciate a good drink, and also putting gummi-worms in said drink, then you've come to the right place and also we should hang out some time. 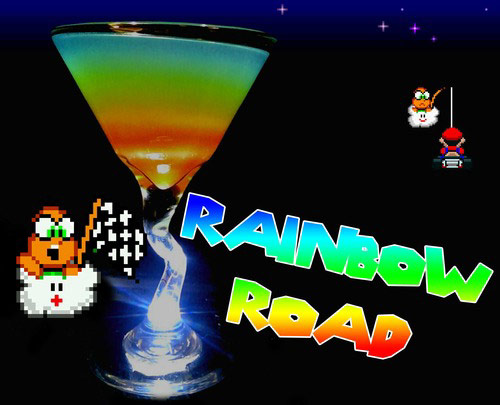 So apparently some people can make this drink look like that majestic picture up there. I am not one of those people.

Granted, I tried to make this one after about three of the aforementioned Tropical Freezes so I willingly admit that my pouring hand may not have been the steadiest it's ever been. Exactly how drunk I was, since I was alone on a Thursday afternoon, will have to be left up to speculation, but if forced to offer an answer, I would probably say "yes."

The taste is fine, really, but nothing special. Even if poured properly I suspect that it wouldn't win any awards, though obviously I can't be positive on that. This one is mostly about the aesthetics, and that's perfectly fine. Every aspiring barkeep should be able to mix up at least a couple pretty looking drinks. But just make sure you mix this up under optimal conditions. Which I unfortunately found out is not "pantsless," "screaming at the stupid drink," and "with Mama Mia at full volume in the background."

(A Hitchhikers Guide to the Galaxy cocktail) 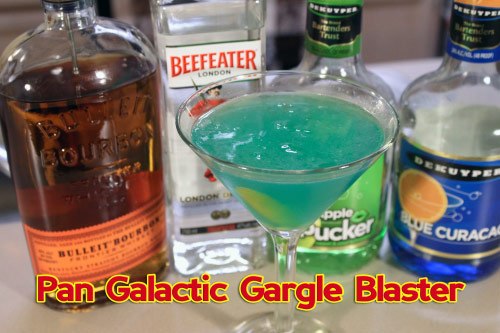 Reading The Hitchhikers Guide to the Galaxy, I always got the feeling the Gargle Blaster was more of pure ethanol somehow infused with a surprising citrus flavor and the wet dreams of unicorns.

Apparently whoever designed this version of it, however, only passingly skimmed the mention of "lemon" in the book and just ran with that concept, hence all the lemon/fruity shit in here. So, granted, this thing still packs a punch (I may have substituted Limoncello in place of regular lemon juice), but honestly that Sour Apple Pucker shit really overrides everything else. It sort of tastes like someone melted Jolly Ranchers and Warheads into a vat and then fermented it. Which…actually sounds fucking awesome, really, but the reality doesn't live up to the (fever) dream.

(A Sonic the Hedgehog cocktail) 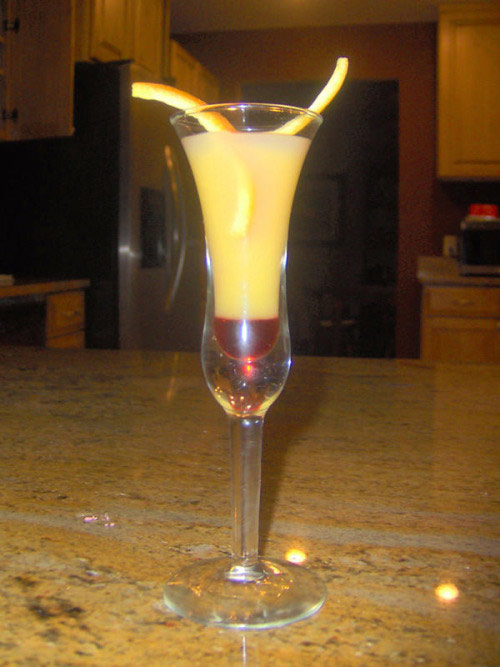 Tails the Fox was Sega's answer to the question that nobody had actually asked of "how can we needlessly ruin one of this console generations coolest games?" And thusly, the perpetual fetal-alcohol-syndrome sufferer Miles "Tails" Prower (get it? Because he's an abomination!) was shit out into the world in Sonic 2, where he would make a name for himself by setting off landmines and dropping platforms, all the while smiling like the absolute idiot he is.

And while Sega has done their absolute damnedest to make sure every character released after Tails has somehow been even more heinous (design note for Sega: retarded, obese cats are depressingly adorable in real life, but depressingly shitty in a video game), Tails still holds a magic candle in the heart of most gamers, as being the first time they've ever wanted to slowly choke the life out of a cartoon fox, using only his own, middle-finger-to-God-giving double tails.

All of that rambling aside, the drink is pretty tasty. Granted, I didn't have any coconut vodka, and since this article was actually researched and written over a period of weeks, and not one super expensive weekend, I didn't even have any of the Malibu Rum from that Donkey Kong bullshit left.

So yeah, essentially all this was a Vodka Sunrise with chunks of orange peel that I had to fish out, but vodka sunrises are totally bomb, so I was cool with that fact.

(An Avatar: The Last Airbender cocktail)

Amusing how what might be the best TV show ever was made into what might be the worst movie ever. Seriously, every time I think about it I get mad. Like, the Earthbenders where held prisoner in a prison made out of Earth. Which is that thing that they can bend. I know that maybe I shouldn't waste time and energy hating on a movie that but if you've read even a couple of my articles around here, you'll get that irrationally hating on things is a solid 84% of how I spend my free time.

How is the drink?

Fucking rad. While no, absinthe actually has little to no hallucinogenic properties, the kind I used still had a local-fire-code-defiling 74% alcohol content, so I may not have seen any Sky Bison, but I sure as hell felt like I could fly like one.

All of that aside one time on a cartoon show for children a young boy got completely blitzed out of his goddamned mind when got high as shit on cactus juice and very few things on earth are funnier than shitfaced children. But you didn't hear that from me.