7 of the Most Stupidly Expensive, Recently Sold Items on eBay

Behold, the dumbest ways you can bid your money adieu.

eBay has a magical function that allows you to see what any given item has sold for within the last three months. On the "filters" column on the left side, where you can sort things like make, model, girth, and so on, you can also find a filter that says "sold for" and it will show you a list of everything related to your search that has sold in the last three months, and how much it sold for.

It's probably the single most useful feature on the site, outside of actually buying and selling things, because it allows you to see the actual, real world, real time value of pretty much anything that you can think of. And sometimes, when I get bored as shit, I type in single word searches like "handbag" or "car" and then add the "price plus shipping; highest first" filter, and just marvel at the most stupidly expensive stuff recently sold on eBay.

Spoiler Alert: People with way too much money buy some really dumb stuff. 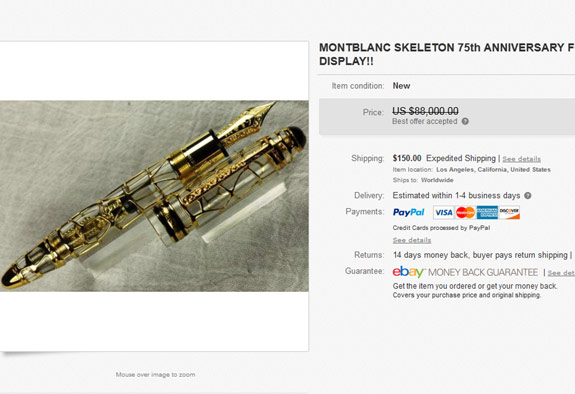 Alright, to be fair, that is easily the coolest goddamned pen ever made. Like, there is no way that that thing isn't some sort of magical controller for an underground army of steampunk clockwork soldiers or some shit. 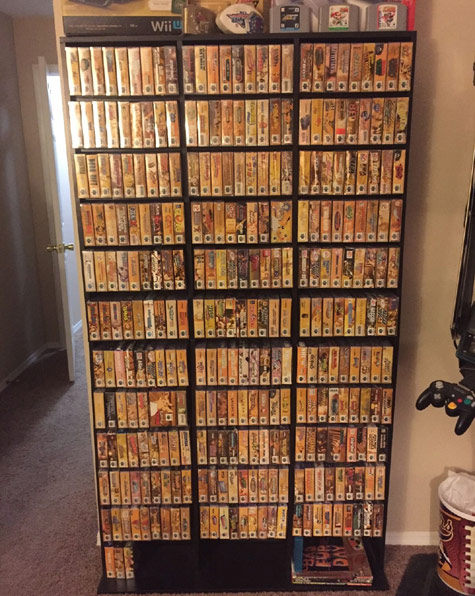 Okay, out of all the things on the list, this is the one that I would be most tempted to buy myself, where I a wealthy oil tycoon, with no regard for either my own currency, or healthy investments.

To be fair, just the few games he decided to include close up pictures of total to a value of around five grand, so that combined with the couple hundred other games, along with the convenience/total nerd-out factor of having them all in one place, and you actually are looking at pretty close to fair market value for these things.

Yes, I am just trying to justify the price tag because if a sale like this ever comes up again, and I have the money, I will buy it. Why do you ask? 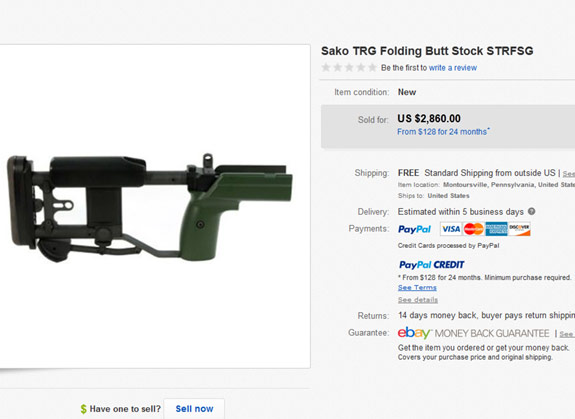 Honesty time. I typed in "butt" as a joke (because I am always at the top of my comedic game), not really expecting any real results. But sure, here's a part of a gun that costs more than most guns, because yea that makes sense. Fuck it, why not?

This one was largely included simply to make my editor (whose name is Court) feel slightly off. Like, hey, maybe that one writer of mine isn't just being quirky by throwing my name around in his articles, all willy nilly, like. But it's probably nothing, right? Nothing creepy?

Anyhow, someone on eBay sold some beads in a box on eBay for the cost of a used Camry. There is literally no information provided about the item other than that the color of the beads is "aqua" (even though there are clearly other colors in the photo). So yea, the odds of these being actual ancient Chinese beads, as opposed to just some beads "made in China" are pretty slim.

Also, dude charged fifteen bucks for shipping. Like, if you can throw down ten grand on some crafting supplies, fifteen is probably nothing, but at the same time, shit man, someone just payed ten grand for some beads. Toss ‘em some free shipping. They could clearly use a win at this point in their lives.

Everyone has heard stories about someone finding a copy of Action Comics #1 tucked away inside of their grandma's dead cat and how they sold it for a million dollars…and those stories are actually true. A guy recently found that exact comic stuffed in a wall along with several others being used as insulation. True story.

So, when I looked up "comic," I was fully expecting some totally awesome, lost issue of some comic. Or maybe the previously mentions Action Comics, or maybe one of the really old ones where Batman just up and shoots a guy dead. But no, at the time of this article, Archie Fucking Comics number goddamn one was the highest-selling comic book on eBay. The first issue of the blandest, most universally uninteresting comic series of all time took home the gold. Pretty literally.

And it's in shitty condition! If you'll look at the picture, you'll notice that the official comics grading for it is "1.8". That's out of ten. Not out of two (the only situation in which a score of 1.8 would be passable). A score of 1.8 means that while it hasn't been burnt to a crisp, there is no guarantee that it hasn't at least passed through something's digestive tract. And someone payed almost six figures for it.

Item: "'Dragonfly' Table Lamp from the collection of Andrew Carnegie"

The first thing you'll notice about that lamp is that it's awesome. Like, if I saw that at a store, for maybe around a hundred dollars, I'd debate about it for a while, but probably wind up taking it home, because, hey man, look at the glasswork on those dragonflies. I'm not made of stone, that right there is art.

So yes, it is a very cool lamp, but is it worth a quarter shy of two million dollars? Well, for the sale price, you could have a lamp. Or literally this entire house:

And still have a quarter million left over. And also…I'm pretty sure that house already has lights in it.

First off, I fully understand that unlike some of the other items on the list, this item's "best offer" was not only much likely far below the asking price, but was in fact just the seller of the item on another account buying it just to show that it sold in order to win a bet with some of the other members of his asylum

With that out of the way, let's dive into this unfathomable insanity, shall we?

The first thing you'll notice is that this is a fucking rock that this man is asking a million bucks for. It's some sort of geode, and not a "Gold Apple Diamond" which a quick Google search informs me isn't a thing that exists. Yes, it looks like it's smiling, but it also looks like a clown face or some blobs and a squiggly line so there's that.

If you can decipher the sellers vague attempts at the English language, you'll learn that he's been cutting rocks for years, and has never seen one like this and that when he saw it it "scared the shat outta me." His amphetamine-inspired words, not mine. First off…dude cuts rocks for a hobby. Like, that's not the weirdest thing, but still. Also, he says that he's never seen one that frowns, either. Though I think we can safely agree that if he does, it'll blow his fucking mind and he'll immediately list it online for the cost of a beachfront condo in Santa Barbara.

Diving further, we see his claims that this rock was "made into a movie called "Sad Herero World." Either he thinks rocks turn into finished films, or he means a movie was made about this rock. Either way, he's wrong, because once again, Google can't figure out what the hell a "Sad Herero World" is. Unless of course he's talking about the loving tribute he himself seems to have made. Like, he titled the rock as "sexy" and took a picture of it lying seductively by a fire. And I'm no prude, and that rock is pretty bangin', but it's still odd. And if you scroll through the other photos of the just-a-damn-rock, you'll see he apparently took it out on loving dates. There's one of him posing with it. One of it enjoying some nachos:

And one of him driving with it:

Which you'll notice he's holding with one hand in the picture, which means unless he's one of the four people who actually got Google Glasses, that means he's holding the camera with his other hand. While driving.

And while I do understand that sometimes people buy established eBay accounts, I do think it's worth noting that he has a seller rating of 222 with 100% positive feedback. So that's weird, right? That the crazy rock guy has apparently been doing this for a while and everyone thinks he's on the up and up for doing it? Either way, he has no other things for sale right now, though I will damn well be following his account from now on to bask in the majesty of any of his future listings.

Also, to be fair, the shipping was free.