It's Time We Educated Our Male Cats About Rape Culture

Sexual violence against female cats is an endemic social problem.

I returned home from a camping trip the other week to discover something horrifying: my male cat, Fry, was on his haunches, attempting to have sex with his sister, my female cat named Lorie. And she did not look happy. When he saw me, Fry immediately stopped what he was doing and slunk off to the other room while Lorie proceeded to curl up and shut her eyes, presumably to put the traumatic event out of her mind.

This wasn't the first time this happened either.

On seven separate occasions since adopting them, I have caught Fry attempting to rape his sister. 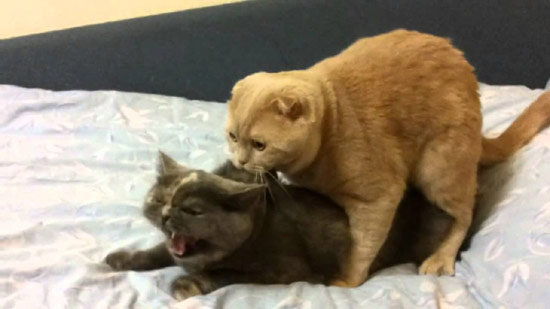 At first I was angry: how could he be so callous to Lorie's suffering? How could he only think of himself and the power he wielded over his much smaller and relatively defenseless sister? How could he act like such an animal? But upon reflection, I realized that the problem wasn't with him: it was endemic to the culture of rape in which he—and all cats—live. This is why every time he tries to mount his sister, I don't punish him: I sit him down for a frank discussion on the finer points of the patriarchy.

I very firmly explained to him that what he did was completely unacceptable and why. He began to purr.And I should not be alone in this.

The time for dithering and navel-gazing is over. We have to look at what's in front of our very eyes and collectively acknowledge that there is a problem when we have our male cats forcing themselves on our female cats on what is likely a daily basis. This is clearly a cultural issue, not a biological one; Fry (and many, if not most male cats like him) has been neutered. He has no biological incentive to exact his sexual whims upon his sister. But when he (and many, if not most male cats like him) are raised and steeped in a culture that accepts and perpetuates sexual violence against female cats, his attempted rapes cannot be simply boiled down to his so-called "base animal instincts." Don't make me laugh.

So what do I propose we do?

Well, when I first discovered Fry's indiscretions, I kept calm. I didn't yell. I sat down with him on my lap and scratched him behind his ears, in that place he likes. But I very firmly explained to him that what he did was completely unacceptable and why. He began to purr, certainly a sign that he understood.

Did the attempted rapes cease?

No, but like anything important in this world, this is an ongoing process of education. Fry will eventually learn his sister's boundaries and it is my hope that many others will follow my example in trying to bring a swift end to this culture of rape in which our feline friends find themselves trapped.

Related
Please Stop Bursting Into My Darkroom to Question Me About a Murder
Pete Lynch
Times Are Tough, But We Still Have this Remarkable, Yet Surprisingly Affordable, 13″ Chef’s Knife
Stephen Sinisi
Everything I Hate About My Favorite Movie, Frozen
Ash Davis
Resources