I'm Totally Against Abortion, Except in Cases of Ugly Women

I’m telling you folks, abortion is gross. Disgusting. Absolutely disgusting. I mean, I’m telling you, I’ve seen it with my own two eyes, and my eyes are so good. My doctor tells me whenever I get a physical, “Donald, Donald, your eyes are the eyes best I’ve ever seen.” So I’m against abortion. Unless the pregnant woman is ugly, then she should kill that baby immediately.

Do you guys know about all this abortion? They tell me, I hear all about it. It’s just wrong, people. That simple. Easy stuff. I knew right away. Boom, no abortion for me. Sometimes the baby is born and the mother just says “murder it.” I’ve heard it! Good ears too, did I mention that? We all know it’s wrong. Bad. But sometimes the mother is so disgusting, she’s already fat from being pregnant, but I mean really something else. Yuck. When that happens, we don’t want that baby. We don’t need that baby. No babies, no hideous babies.

Life is precious, really precious. Too true, I say. If a woman gets knocked up, and you know, hey, so many people get pregnant. Lots of women. It’s evolution, to make children and have babies. When the woman’s stomach has the baby in it, she’s gotta keep it. That simple folks. The law. Then you see these horrible girls. Shameful bodies, no effort, boring face. Really, a disgrace. I have the support of everyone when I tell you all we can’t let those creatures having children. She’s ugly, baby gets the ugly. Always happens, see it all the time.

We gotta be sure that the baby won’t be a looker before we kill it.

Sometimes a woman doesn’t want to be a mother. I say too bad, that’s life, honey. Can’t get what you want. You know that song? Stones. Good music, catchy. So she’s gotta have that kid. Push it out herself, the whole deal. Raise it. Life has to live, basic knowledge, folks. Women are poor, that’s sad, maybe a rape happens or the dad sees his daughter and thinks, you know, why not? Still gotta keep that kid. God wants it that way. He got her pregnant with all that stuff and it’s hers now. Have you seen these women who just can’t make themselves pretty though? Even if they try with the makeup and the surgery and all the things they got these days, nope. Stay away from me, sad, sad. Scary, almost.

And no babies for those ones. Because I need pretty, I need beautiful. If she has an ugly child now, in 18 years, where is she? Not near me, I know. Far away, please, I hope. These ladies with no look, oh boy, shouldn’t live. End it. Before it starts, abortion. I’m pro-life, you understand me folks, life every time. Except these gross ones. Get them out of here. Abortion? Not so bad sometimes, maybe.

We gotta be sure that the baby won’t be a looker before we kill it. Genetics, it’s what happens with kids. My children, sometimes you look at them, time goes by and you think just gorgeous. Gorgeous! People want to look and touch. Can you blame them? Not me, not me. Nope. We knew they’d be hot. And I mean hot. Scalding. Almost too hot. I don’t think so, but some probably do. You get people, they think all kinds of things. No abortions in my family. Attractive people, no killing fetuses for us. Can’t do it, just can’t do it. Couldn’t if I wanted to. 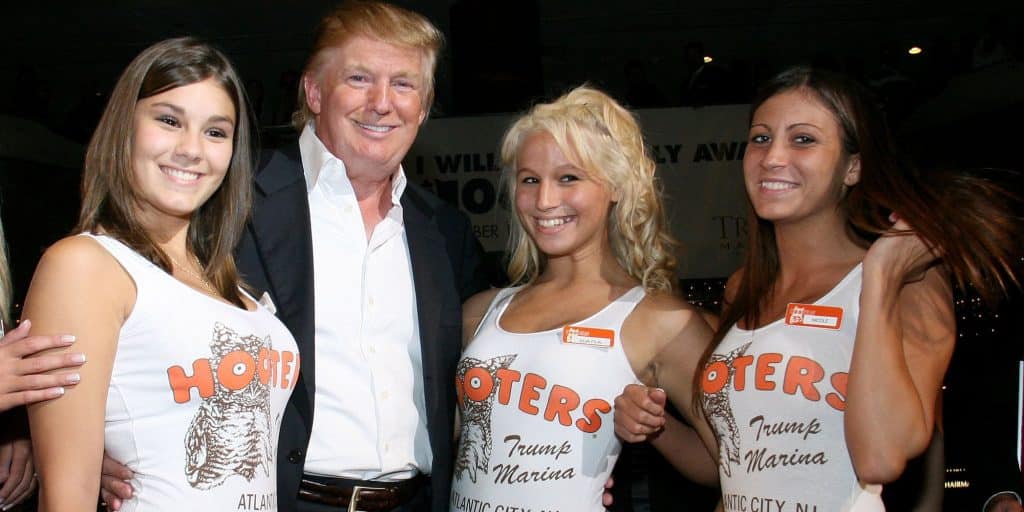 Then the other side. I hear both sides. It’s my job. The Oval Office, folks. It’s what we did all that work for, and boy we worked. Not as hard as the others, I mean so much money for nothing! But not us, we saved our dollars and won by so much. Most ever, everyone’s always saying. The other side, they only want abortions, every time. “No kids allowed,” they say. We compromise. Can I compromise folks? I make the deals, I know how to make the deals, they think they’re compromising and really, I’m just winning. I don’t lose, can’t lose. Won’t lose. “No abortions allowed,” I tell them. “But the uglies need them,” I remind, I remind. Mandatory.

When these horrible women finally get the kids out of their privates and all that, something’s gotta be done. Punishment for not looking attractive and hot and still making babies. Not good for America. “America the beautiful.” It means something. Stay beautiful, it needs to. I can’t allow abortion, no way. Plain wrong. Sometimes, though, you gotta. These ugly women, they just gotta go. Ugly. Ugly. Ew.

More Like This
Until They Invent a Profession to Help People With Their Issues, I Will Keep Burdening Women With My Problems
Hugo Ramos
Challenging History’s “Great” Men: The Case Against Professor Oak
Harry Davies
Elizabeth Holmes Proves Women Are Just as Good at Committing Fraud as the Guys
Gwen Thomas
Resources

Sure, eat the rich if you want… but it sort of seems like an unnecessary extra step.