Try one of these original ideas to make your next college party one to remember.

You’re sitting there, it’s a Wednesday night, and for some reason you are reading my article rather than getting shitface drunk. It’s all good, because either Friday or Saturday night is your big night. You need to throw down, and throw down mother fucking hard. And the best way to really get shit legit and bumpin’ is with a theme party. There are tons of themes out there but you should always strive for originality. Oh, and your party needs to be awesome. 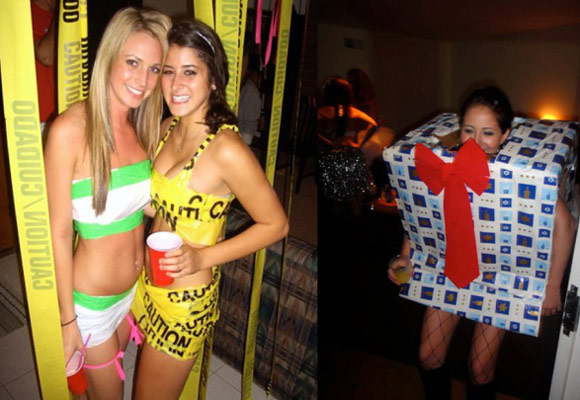 Now, may I suggest the top 10 party themes that you can throw to guarantee a fun time, a blackout evening, and most importantly, multiple mistakes:

Some people really might not expect a biker ho and bicycle bro party to be that entertaining. Let me disagree with you right away and inform you that this party theme is golden—well it’s mostly black leather and spandex, but that’s all good. Women must arrive at the party dressed as biker ho’s while men must show up as bicyclists, as closely resembling Lance Armstrong as possible (except with two nuts).

What comes out of the party?

You and your boys get to dress scantily clad in spandex, revealing so much and yet so little at the same time, and you get drunk while wearing helmets. Everyone wins!

And, because girls are dressed as closely to biker dykes as possible, lesbian experimentation is pretty much inevitable. Once again, everyone wins!

9. Blackout or Get Out

This theme is pretty simple. Upon arrival at the door each guest must either shotgun 10 beers consecutively or rip up to 10 shots (preferably of 151). If the person can still feel their limbs, 2 more beers or 2 more shots must be administered.

Why is this party so fun?

Well, everyone is guaranteed to stay at the party (at least I hope). The real reason it will be so fun is because it will be an ultimate shit show. An essential element to this party is more alcohol past the entrance. A warning though: if you throw this party, be ready for some major fucking clean up in the morning.

Not named after the band, rather “who” as in who are you. You can take this theme one of two ways.

First, you can make the guests dress up as a famous person in history. For example, women can show up as sexy George Washington, sexy Abe Lincoln, sexy Ulysses S. Grant, sexy Emily Dickenson, sexy Martin Luther King Jr., and so on. Guys can go as either JFK or Larry Bird. Neither male costume can be sexy, for that shall result in immediate expulsion from the party.

The other way to operate The Who Party is to have all your friends dress as one of their friends. This allows for some great reminiscing. Just make sure the women are dressed sexy.

For the 20’s party, drink martinis and other classy drinks, and make sure everyone shows up in their finest attire. You want this to be an evening your guests remember, and have unprotected sex at. So make sure you remove any modern day appliances such as a television or CD player, and set up your living room to include a record player or live orchestra.

For the 60’s party, be sure to include multiple psychedelic drugs and baggy, hemp, or out-of-style clothing. You should expect to be really fucked up into the morning so make sure you bolt all the windows shut and have some Pink Floyd ready to go on repeat on the iPod. Having Doritos accessible is definitely encouraged.

The 80’s party should be a blast. Bump Hall and Oats, break out the cut sweatshirt, maybe roll on some high white socks, and style that hair in an unusually embarrassing manner. Prepare to giggle and possibly get AIDS. Should be a blast!

What good can be said about the 1940’s? Sure, FDR had a good run, but nothing too cool went down. Fucking Russia got weird with us. Screw that decade; it’s time to run wild with actual 40’s. The 40’s party really is one of the coolest parties to be at. Everyone pretty much drinks the equivalent of at least 10 beers, and people are waving around their hands like crazy, and getting drunk very quickly.

Upon arrival, duct tape a forty beverage—specifically Olde English, as that’s the classy way to get drunk—to each hand of each guest. Guests are not allowed to take either off until they completely finish both drinks.

Sit back, get wasted, and let hilarity ensue.

What you need for this party is a basement, 40’s, and a lot of blunts. The idea at this party is simply to get very messed up. This is achieved through the casual consumption of various 40’s and hotboxing the basement. It is a must that at this party there is beer pong and that each player is smoking a blunt, each game. Once everyone is in, shut the doors, shut the windows, blast hip-hop music, get high, get drunk, get fucked up, and enjoy.

Of course, this party will be very expensive, take consideration for the large amounts of beer and huge portions of chronic. Also, cleanup and airing out your basement (or your parent’s basement) will be a bitch, but it’s so worth it.

I would have to assume everyone knows what this stands for: Anything But Clothes. So awesome, I know. Basically there is only one requirement to enter the party: no shirts, no shorts, no pants, no service. A guest may not wear anything that can be classified as clothes.

Half the party will most likely show up in a trash bag, but the originality of some of the more ambitious guests will make the party awesome. I’m talking girls dressed scantily clad. I’ve seen outfits that fit around women include the following things: watermelon, Post-Its, whipped cream, and Saran Wrap, among other things.

No one likes to see a lot of male nudity, so it is encouraged that guys keep it conservative. Of course, some will risk it all and attach a Natty can to their junk or simply show up ass naked. Feel free to kick them out if necessary or if you self-induce at the sight of such a thing.

Above all, you better get laid.

This is one of my favorite themes. Let me explain about the first Viagra and Sweatpants party. It was a slow Saturday afternoon after a hard night of drinking. My friend had an open house for the whole weekend, so, to no surprise, we abused the hell out of it. We had cleaned up the previous night’s mess and were relaxing to some quality episodes of MTV’s “Parental Control.” A debate began to try to figure out what we were to do with our evening. I went to the bathroom a boy, and I returned a man, with Viagra in hand. Supposedly, Tom’s dad is a user, but we quickly became the abusers. We were all still in sweatpants as we called up our ladies, and upon their arrival we popped them pills. Fun was most definitely had, as uptucking was not even possible.

One very special rule though: Girls must wear tube tops. It’s the only way to make it fair.

There is no better holiday than Halloween. And there is no better party to have than a Halloween party. What other night of the year are women encouraged to dress as slutty as possible while guys dress as funny as they can? I love the holiday, which is why there is no reason it should be limited to one night a year. Break out the 151 and Absolut because it’s a special occasion. Call up everyone in your phonebook because on your special night, say in late March, it’s Halloween all over again. No doubt are you getting laid, HIGH FIVE.

There. I’ve planned your Friday and probably Saturday night. Don’t thank me, just get drunk and enjoy the debauchery that shall most definitely develop. Remember, wrap your shit up with a nice domepiece—that is essential. Stay safe, party animals.

Related
An Obituary for Your “College Friends” Group Chat
Mary Gulino
Are You a Real New Yorker or Just a College Intern?
Elsa Nierenberg
Orientation for College-At-Home, According to Your Mom
Sue D. Gelber
Resources