Cable networks turn up the heat with cannibalism, prison tattooing, and urban warfare.

TV's top cooking competition heads to the homeless culinary capital of Albany, NY for Season 12. “Top Homeless Chef” has been building to this moment, as the cheftestants must demonstrate their creativity and prowess in making Albany-inspired dishes, such as pigeon tartare and a rat and vegetable combination that goes well with Gordon's Vodka.

Judge Padma Lakshmi and company return in a gathering of the finest homeless chefs ever to serve a dish on the show to determine the best of the best. Join the fun Wednesday nights at 10 p.m. on Bravo!

2. The Real Housewives of Mogadishu 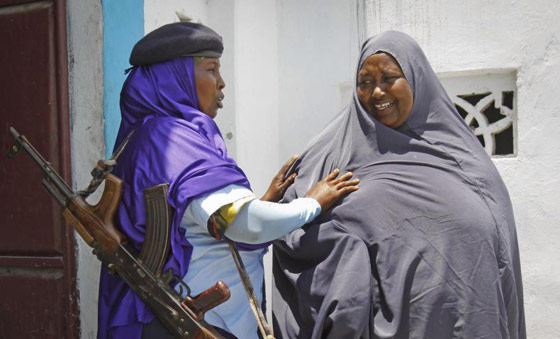 “They feel so real, girl! Where did you get them done??”

Our favorite ladies from the Horn of Africa return for a second season of gossiping, shopping, socializing, and surviving civil war in Bravo's groundbreaking series. Two new housewives have been added to the lineup, as maize vendor Haweeyo and sorghum vendor Isniino join old favorites Dahabo, Faadumo, and Jamilah for continued fun in the Bakaara Market in the heart of Mogadishu.

Career and relationship troubles abound throughout the season, as the housewives try to balance their personal lives with the intense urban warfare between the government and Islamic extremist group Al-Shabbab.

3. Keeping Up With the Kataris

The Katari-Mamani family promises to bring their usual brand of drama when our favorite Bolivian family's E! series returns this fall. This season will show new mother Kisela giving Kantuta and her partner Tunupa a tour of her new mudbrick farmhouse with fiancé Kustavo Oeste. The new mother looks elated as she gazes at the 15-carat glass sparkler designed by the village glassblower. Laugh along as Kisela tries to teach Kantuta how to boil rice.

Fingers are tied tightly with string and then cut off with an axe. Must-see TV!We'll also see an irate Boti Mamani as he gets upset with wife Kristal Mamani because she's failed to go to the market and buy food before strikes shut down the city.

Wherever the Kataris go, drama follows. Don't miss it!

Join us Tuesday nights on TLC as we follow master tattoo artist Charles Grinnell into the world of prison tattooing, showcasing both the artist and his clients. Get an in-depth look at the emotional stories behind the tattoos and the meanings inmates attach to them. Watch as Grinnell demonstrates his adept use of staples, paper clips, and guitar strings dipped in pen ink to create jailhouse masterpieces on petty thieves, drug dealers, and homicidal maniacs.

“Papa New Guinea's Got Talent” returns this fall with the country's hottest performers ready to compete in the show's ninth season. Join Narmu-Varnu, Buassi, and Ewunga-Goiba as they search for the most amazing acts from our favorite Melanesian country. Highlights from Season 9 include “endocannibalism,” whereby “feasts of the dead” forge a permanent connection between the living and the recently deceased.

A spicy performance in the season premiere comes from the Dani people, who cut off their own fingers to both gratify and drive away spirits. Fingers are tied tightly with string and then cut off with an axe. The leftover piece is then dried and burned to ashes. Must-see TV!

Topping that off is a groundbreaking performance by the Matausa tribe. Watch as they slide two thin wooden canes down their throats to induce vomiting several times to empty their stomachs. Afterward, a collection of reeds are inserted into the initiate's nose to further expel bad influence. Finally, they endure repeated stabbings to the tongue. This bloody ritual purifies them, and afterward they are truly men. Join us Friday nights on NBC! TGIF!

Related
My Bhutanese Drama Students Want to Recreate “Son of the Mask” and I Have No Idea What to Do
Evan Purcell
TV Shows from the Middle Ages Not Picked Up After Their Pilots
Ben Thomas
Period Drama or “Period” Drama?
Katherine Revelle
Resources