No one looks out for me, you shouldn't promise to pretend to either.

It's like that Eddie Izzard joke: cake or death? You rarely ever hear someone actually choose death, unless they're joking, of course, because everyone loves cake. So then it's like that Marie Antoinette saying, "Let them eat cake." And, let's face it, she was a child and a moron and is now a theme for sweet sixteen parties and celebrity weddings which only beckons the question: what presidential candidate will be an oh-so-popular theme in 500 years, eventually regaled in a Coppola-esque film directed by a robot? 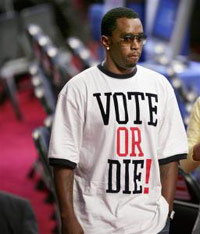 "Or you know, just buy my new album, whatever."With the media exploiting who slept with whom and who has a lovechild with a Nazi and who is snorting lines off Charlie Sheen's glass table while high-fiving a tiger, it's not so hard to imagine what will become of our decisions over the next few hundred million years. (Assuming we survive this year's apocalypse, of course.) We've voted a man (yes, even I did!) into office who has done very little of what he set out to accomplish, despite his rhetorically-sound speeches. And now, with voting day (now turning into Rex Manning day) just around the corner, we get to watch bonobo monkeys sling shit at one another all the while trying to get into our pants because that is the truth behind these ridiculous debates and advertisements: we vote for who we want to sleep with. Or, at the very least, date.

Who is the lucky candidate to change our economy and help us college graduates? At this point, I'd rather get a second job than vote.While in college, I had to analyze Obama's speeches for a rhetoric class, but it was hard to remove oneself from doe-eyed youngin' and transform into sophisticated research lady when my professor was practically dry-humping the projector screen. The woman had a not-so-subtle crush on the man—despite her claim that it was truly his words—and even though I was reading some very sexy sentences (he never ended on a preposition! Oh, another group of 3!), it wasn't enough to make me salivate and take off my clothes. However, it was just enough to make me vote for him.

And isn't that what we young folk tend to do? Think with what's in our pants? That's why the "Vote or Die" campaign was so successful: Diddy made it rain in a sexy, violent way. We couldn't get enough of it, and I couldn't even legally vote at the time! Oh, but if I could have, I would have been rollin' in bitches and thrusting my .9 mm in many a face. Diddy, and many celebrities, made voting sexy. They made America want to hook up in a voting booth at the VFW because feeling like we made a difference in choosing our government officials for a brighter tomorrow is hot. And, we get a sticker, too.

Since I was unable to express my viewpoint via a punch card in 2004, I had to settle for government class. The class was split in two (naturally): the Bush-inators, those conservative kids who mostly spewed what their parents had regurgitated into their mouths and freely used the word "queer"; and Everyone Else, those of us left to debate over who had a kinder face: John Kerry or that retired general guy. A hot topic, other than whose sex appeal would surely garner bill-passing, was education. Or, it was supposed to be since we were all seniors on the cusp of adulthood, college just in our sights; however, it's a tad difficult to debate which candidate has our generation's best interests in mind when the majority of us were probably thinking about getting laid in a dorm room or blacking out in a frat house on a pool table or any other scenario resembling a Hollywood plot. Needless to say, I am still paying off my student loans with no end in sight.

Of course, I can't blame my poor financial decisions on a president. I have always been bad with money and have just recently learned to manage a budget. But, that's not to say that the President is off the hook either. I don't expect him to wipe my slate clean and declare me debt free, but I also don't expect him to make it damn near impossible to pay off high interest loans in a double-dipped recession economy. So, who is the lucky candidate to change the outlook of our economy and help us college graduates? At this point, I'd rather get a second job than vote.

We are no more intelligent than those bonobo candidates flinging feces at one another, desperately trying to become king of the mountain.The luster and shine have worn off. We no longer get butterflies and the sex is decent, but we can't help but wander off and dream of something better and more exciting. Welcome to a relationship. The honeymoon is over, and you have that seven-year-itch: no matter the clichéd phrasing the feeling always remains the same. As a collective body, we get sucked in, especially during trying times: Bush declared war in the Middle East after 9/11 and we all practically volunteered to go kick some ass. American flags sold out and country music couldn't get more patriotic. Flash forward to 2008 and we are so sick of where our choices have brought us that we fall behind a man promising "change." And that is how it always starts: with the best of intentions, the newness breeding hope. We put away that pint of Ben & Jerry's and we turn off that Nicholas Sparks movie and we begin to believe that life isn't so shitty after all. And just as quickly as it all started, the fire has already fizzled: unemployment went up, people occupied financial districts in cities all over the country, the new Twilight movie came out. We find ourselves, again, questioning those decisions, wondering if anything better is possible.

What are our options? Should we keep chugging along with the economy, with the policies, with our leaders, but make more "adult" decisions? Should we uproot our lives and join others in protest, camp out and voice our collective anger and dissatisfaction until we are either heard or pepper-sprayed? Should we write to our senators? Should we declare war amongst ourselves and kill one another? Should we go to Canada? Should we even vote?

"Vote or Die" was catchy, plain and simple, and we bobbed our heads along like those toy dogs on car dashes, but what does it actually mean? We could go the South Park route where you are held at gunpoint to choose between two candidates who do not differentiate much, but that is life and it is our right to exercise our civic duty. Or, you can die, as in not be "heard." But, in a government system so polarized that people are left with very few options, when are you, the single person, ever actually heard? The phrase "vote or die" may seem like it leaves us with two options (a system we are so accustomed to that it's Pavlovian, even religious), but, in the end, as we jump from candidate to candidate, president to president, we are left with nothing. Whether we vote or whether we choose not to vote, we die, and we will feel like we are making a difference every few years or so. We will feel those butterflies, but those feelings always go away because we unapologetically usher in someone new, someone more exciting than the last.

Therefore, the problem is us—the collective "we." We like to put the blame on our leaders, but we listened to their milquetoast answers, we donated money to their campaigns, we bought their books, and we elected them. We made these decisions. We created these options. And now, these are our consequences, and we are no more intelligent than those bonobo candidates flinging feces at one another, desperately trying to become king of the mountain. It is hard to separate yourself, the individual person, from the collective we because it is so intoxicating: that feeling of belonging, of having a shared voice. It's comforting to know that someone else, or hundreds of other souls, have your back and that you are not alone in this world. But if we sacrifice our individuality, the single voice (essentially, what "I" want, what "I" believe), then we negate our right to be heard and we continue to turn the wheels of our established system.

Do we need to elect new officials and change the system? Probably. But, more importantly, "we" need to change, too. At this rate, I doubt scholars will refer to our time as anywhere remotely near The Great Generation. And maybe we don't necessarily need to be that, but F.D.R. wasn't re-elected twice because polio was sexy and Abraham Lincoln didn't march into office because stove pipe hats were all the rage. We can do better than ourselves, better than our media-minded, lack-luster, robotic choices. And, if not, then maybe we deserve to die: to be silenced and beheaded as we usher in the apocalypse in asinine decadence and spent glory.

Related
I Voted for Donald Trump Because I Thought He’d Help Me Win Sandra Back—I Was Wrong
Alexandro Strauss
Please Vote For Me, I’m Exactly Who You Said You Wanted
Megan Downey
A Vote for Fuck Trees Johnson is a Vote for No Fuckin Trees
Gary Williamson
Resources