Why Donald Trump's Hair Should Have You Worried

Trump's pay-attention-to-me hair shows exactly how scary he can be.

Trump's shitty, stupid hair is legitimately the single most frightening thing about him. I am in no way joking, and I promise I will clarify. But first, I want to say what might very well be the most controversial thing I've ever suggested:

Trump is a smart person. 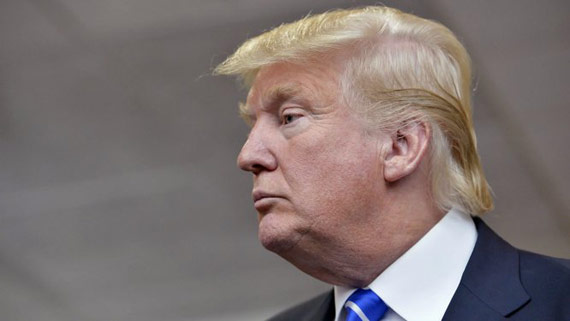 Do not misunderstand me. Trump is bloated, jowly evil incarnate. But he knows what he's doing, and he's doing it very, very well.

He is not only a famewhore but is in all seriousness the lord supreme of all famewhores, because unlike most people who do dumb things for attention, Trump is legitimately willing to take down an entire nation for his own selfish, insecure gains.

Let's clear up something that should be obvious, but according to my Facebook feed, isn't. Trump knows exactly how crazy and racist he sounds. He knows. His team of advisers and analysts know, too. Of course they do.

Donald Trump can afford good-looking hair. He can afford all the hair he wants.Every time someone like Snooki or Miley Cyrus does something crazy on camera that is clearly designed for attention, society seems to act like those people don't know we're watching them. Like we caught them off-guard when they weren't paying attention, instead of purposefully doing things like posing nude in magazines, or devouring passing groups of Oregon hikers (or whatever it is Snooki has been up to lately). They know that we're watching them and they know that we lose our shit when they do this stuff.

Trump isn't racist. Or at least, he probably isn't. I honestly don't know and really it doesn't matter. Because at the end of the day, if you say shitty things, and do shitty things, then you're a shitty person, regardless of how you really are on the inside. The inability to understand this is no small part of how many people stay trapped in shitty relationships. But that's a whole other conversation and I also probably just made you picture having a relationship with Trump. A carnal one. I won't apologize for that.

The great wheezing fartsoul that is the Trump has, quite famously, thrown his hat into the presidential ring more than once, and every time it was clearly just some ruse to promote a book or a TV show, and he backed out. But this time he stuck around. There's probably a whole host of reasons why he decided to stick around this time as opposed to the other times and "make America great again," but they aren't important, because at the end of the day he did.

My honest theory is that Trump decided to step into the ring this time, and say as much crazy, loud, racist, hateful bullshit as possible, in order to get as many cameras pointed at him for as long as possible, and ride the fame wave for as long as he could, and then upon his inevitable crash, cash out with some nice book deals, TV shows, urethral shock sticks and other promotions.

But then he started winning.

So he decided to kick it up a notch, just for the hell of it, and then he said all Mexicans are rapists. It would seem like the fact that a solid fifth of us aren't getting raped by Mexicans would clearly paint that stat as inaccurate at best, but it pleased a very vocal, very terrifying and very large portion of the American population. So, because Trump is the utterly horrifying endgame of taking the saying "no such thing as bad publicity" too far, he decided to keep going. The spotlight is more important to him than the hate.

Sidebar: Calling a politician "Hitler" is usually how I know that I can stop listening to you. Which is great, because I don't get to feel smarter than people very often. It's cheap and usually very inaccurate. But there are exceptions to every rule.

Trump went and did something crazy, even for him. Even after his racist rants, his aggressively misogynistic rants, his super double turbo edition racist rants and his just plain stupid rants, he went ahead and suggested something, uh, fucked up.

He suggested not allowing any Muslims into the country and that all the ones that are currently here should have to have some sort of identifying mark. You know, like Hitler did. But that's not the scary part. Or at least, just one of the scary parts.

We pay attention to him. We pay attention to his hair. It's all part of the character of Trump.The other scary part is that Trump knew exactly what he would be compared to after making that comment. That wasn't just some off the cuff bullshit. He, and likely the team of staffers he ran it past, knew exactly how it would make him sound like Hitler. And they did it anyway. Because, for Trump, the fame, the power, the attention is king above all else. He is willing to say, and very likely do all of these objectively terrible things because it works. A scary-large portion of the country will support him because of these things (because logic is but a faint afterthought in this world) and the rest of the country will talk loud and long about it—and that is what matters (to him).

Which brings me back to his hair.

Trumps terrible, obviously fake hair has been the butt of jokes for a long time. Ha ha ha look at the big billionaire businessman/politician and his bad hair, doesn't he know how bad it looks?

Of course he does.

Donald Trump can afford good-looking hair. He can afford all the hair he wants. He could buy Fabio's actual hair off of his actual head, and have some cosmetic surgeon attach it in a way that would look realistic and convincing. Because even though he's by all accounts a terrible businessman, he's still richer than any of us reading this will ever be.

He can afford any goddamn hair he wants. And he chooses to walk around looking like a joke.

Because it keeps us talking about him.

I don't think Trump will win; I have to think that in order to sleep at night (just kidding. I drink myself into a coma every night regardless of the current political climate). But at the end of the day, there's still a small shot he could pull it out of his ass (along with the other things he keeps up there, like the souls of those who in life dared to dream of something better) and win.

This scares me a little bit.

Because I have no reason to think his antics will calm down if he gets elected. I don't think he'll just toss aside the mantel and say, "Just kidding. I'm actually a pretty dope guy. Let's get proper healthcare and free college education for everyone!" out of nowhere. No, he'll keep the Racist Train going full steam into the station at Angry Wheezing Junction, right up until he pisses off a country that winds up blowing him up.

I think that, because of his hair.

Tired of Demure, Uptight Christmas Nuts? You Need Emeton’s Loose Nuts This Holiday Season
Sarah Totton
We’d Love to Offer You This Job, but I’m Afraid You Don’t Already Have This Job
Eddie Small
Sure, the Metaverse Is the Future, but Have You Heard About the Bubba Gump Shrimp Company?
Bradley Meyers
Now Here’s MSNBC’s Steve Kornacki with Our Basic Math
Pat Cassels