(Scene: It's the basement of a community center. There's a table full of coffee and a circle of chairs. Every seat is taken.)

MODERATOR: Hello everybody. I see a lot of familiar faces here, but I've never seen you all together. So why don't we just go around the room and introduce ourselves and why we're here. Al, would you like to go first? 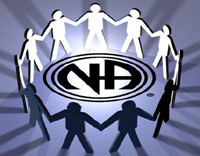 AL: Hi, I'm Al. I've been abused, for about 13 years now. It started with a bottle of Smirnoff and a two liter of Coca-Cola, and just kind of spiraled from there. My guy isn't that bad to me, it's just, I shouldn't even be here. He's really not that bad. He makes special trips for me, there's always some sort of variety and he really appreciates all the good things I've done for him. Everybody has rough patches.

MODERATOR: Now Al, remember what we say here at NA: "You can't make excuses for the one who abuses."

AL: Well, fuck you too then. I don't even need to be here. I'm sold in stores, not under the bridge and street corners like you pieces of shit.

MODERATOR: Crystal, how about you?

CRYSTAL: Hi. I Crystal. Sometimes my man ignores me for a few minutes, so I just start fucking screaming in his ear until he pays attention to me! And even if he doesn't, I kick his fucking redneck teeth out and make his skin look like ostrich balls. He'll never quit me. I'm just that fucking good.

COCO: I've got something to say that is soooooo important.

How many of your abusers have blacklight posters of you hanging in their dorm rooms? Hmm? COCO: I mean, she only abuses me once in a while. And it's always in groups and really, we all enjoy it. And when I'm gone, she comes back like 45 minutes later and we have more great times. Usually in bathrooms or secluded places, but still. I don't see the problem. I mean, I'm having a good time, she's having a good time. Sometimes she's got to suck somebody off or pawn off a ring her daddy gave her to pay for me, but we're just hanging out, having good times. Nothing wrong with that.

MODERATOR: Actually Coco, the first step is admitting you have a problem. You're being abused.

COCO: But I like it and she likes it. And my teeth are really tingly right now.

X: Hey! You know, can you be abused, by not being abused enough? I mean, back in the day so many people wanted a piece of me. Then all of sudden nobody cares any more. I mean, I was awesome. There were warehouses packed with people like me. I used to be so cool, but now I'm so alone. I get action like, twice a year now. That's just not enough.

X: Look, I'm NOT the new Ludes. That loser is long gone. I want to be here forever. Like Harry.

HARRY: Sup. I just, you know, don't care. I don't hurt nobody. Life sucks, and I take care of it. He needs me. Friends don't just ditch each other. We stay tight for forever and we never leave each other's sides and never think about anything else.

HARRY: Yeah baby. Maybe we should make a mixed tape or something.

CRYSTAL: I can have a mixing board constructed out of cardboard and El Camino parts in two days. I won't sleep ‘til it's done.

MODERATOR: Now let's all remember, dating within the group is always a bad choice. Coco, where's your brother, Cracker?

COCO: Probably sucking dick under the bridge as usual. That guy has no class. He's the joke of the family.

MODERATOR: Okay, how about you, Mary Jane?

MARY JANE: Well, I've started hanging out with him again.

MODERATOR: You can't be enabled or be an enabler to your abuser.

MARY JANE: No, it's not like that. He's not like the others. He's really nice to me. We do our thing and he'll sing songs to me, tell his friends how great I am and even share me with some of them. We have all these great ideas too. You'd never guess how funny the joke was that we thought up about passing out on the roof of the White House while drinking whiskey with the president.

MODERATOR: Mary, you shouldn't defend him or yourself. You're making big mistakes.

MARY JANE: Look, man. I help people and he helps me. How many of your abusers have blacklight posters of you hanging in their dorm rooms? Hmm? How many of your people will go out in public and say, "Yes, I abuse my partner, and we're both cool with that?" Huh? I mean, y'all need to just chill out with your own problems and leave me alone.

CRYSTAL: How many of us are self-righteous bitches who should shut their stupid hippie mouths?

MARY JANE: Okay, let us do a simple test. Let's look at a photo of my guy before he started abusing me and then a current one. See, here he is in the beginning with his polo shirt buttoned all the way up and his hair combed perfectly. Now look at him. Totally relaxed. And your guy at the start: he's wearing a Metallica t-shirt, mullet cut and a wispy mustache. Now, he's still wearing the Metallica shirt, just with more holes, and he's lost most of his hair but still has the ape drape and the date-rapist's moustache covering the fact that his nostrils have melted into his whole face.

CRYSTAL: At least my guy doesn't have dreadlocks, you free-loving whore.

AL: I'm sorry to interrupt this all, but I have a date at the bar in a few minutes, and I really don't belong here.

MARY JANE: See, why does he get to leave?

AL: I don't know, because, let's see, I'm not a whiny little bitch and I help people get laid, dance and fight. You just make people paranoid and want to touch themselves while eating peanut butter from the jar and watching Teletubbies.

MODERATOR: This is out of hand everybody. Calm yourselves.

(Les D. walks inside the room and gazes about.)

LES D: Wow. These colors smell fantastic. What are all you garden gnomes doing at the hamburger conga line?

AL: That's it, I'm never coming back here with you retards. I'm out of here and maybe I'll start my own group.

What did the bad joke have to say for itself? “Let me explain.”