Lance Armstrong Has Always Been a Douchebag

Spin it any way you want, but you've always been riding tandem with an asshole.

I know we've all hit the wall when it comes to reading about Lance Armstrong by now, but something has been really bothering me about this whole ordeal that I simply must get off my chest, so let's crank it up a gear. What surprises me most about the Lance Armstrong Tour de France scandal isn't that some arrogant dickhead cheated at riding an exercise machine, but that people were completely unable to spot an obvious douchebag right in front of their faces.

What I find even more of a shock though, is people's desire to continue supporting this dickhead after it was revealed beyond a shadow of a doubt what a terrible human being he is. Seriously, what is wrong with you die hard Lance Armstrong supporters? Give me a brake, get some balls and start hitching your cart to an actual decent horse instead of just another lame ass.

Lance Armstrong has always been a complete douchebag. He's an arrogant asshole who was well known for bullying his cycling team extensively and being the hub of all the illegal doping activity. Throughout this whole fiasco of lies about doping and cheating he's gone on the counter attack, sued people, and tried to ruin their lives simply for telling what he already knew was the honest truth. He left his wife, who raised their three children while he was off training for races, despite the fact that she stood by him through his cancer recovery. I guess he couldn't handle being married or raising a family and had better things to do with his time, like getting engaged to Sheryl Crow (wait, what?), who he subsequently left because she wanted children. Of course that didn't stop him from going on to have two more children with Anna Hansen later, but not before boning Ashley Olsen (21 at the time), Kate Hudson, Ivana Trump and various other celebrities. Here's the clincher though, did I mention Sheryl Crow also had cancer when they split up? Real nice, Lance… a true winner. 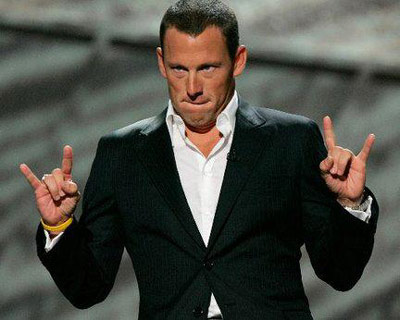 Yeah, nothing about this guy screams douchebag in the least.

But nevermind all that, because he pedaled Livestrong yellow bracelets to raise money for cancer so he's totally awesome and we should just leave him alone because he did one good thing, right? Um… no. I'm sorry, but just because you do one good thing in a whole slew of morally reprehensible horseshit doesn't mean you get a free pass for all the rest. Yeah sure, he raised a shit-ton of money for cancer, which, mind you, isn't THAT hard to do when you're already rich and famous, but he's also a terrible human being who stole money, committed fraud, trafficked controlled substances, committed perjury, and deliberately ruined people's lives all for the sake of his own massive ego.

Not only that, he's fucking proud of it! I mean, who tweets a picture of themselves lounging around amongst their winning jerseys after they've been stripped of all their titles?! An arrogant asshole who blatantly flaunts their terrible behavior, that's who! I say throw the fucking book at this jackass and make him fork over all the money he won…er, stole. Personally, I'm hoping the Department of Justice is drafting up a new lawsuit and hammers him with some jail time, with no quick release.

Back in Austin just layin' around… while others are training to compete.

I watched the interview with Oprah and what stuck out most for me was his cadence when they spoke about whether or not he was gearing up to make another comeback and his exact words were, “Frankly, this might not be the most popular answer, but I think I deserve it.” Seriously?! Are you yanking my chain?! This guy, after all he's said and done, feels that he's entitled to compete again?! HAHA classic! I'm sorry you're feeling boxed in, but you've definitely burned that bridge. Lance, you're the biggest derailleur of your career and no one did this to you but yourself. Everything that has happened to you and all of your problems stem from your own actions. I'm not buying Lance Armstrong's sudden back-pedaling, fake-remorseful apology for one second and quite frankly I tire of his antics.

What kind of a message would it deliver to society if we let people get away with this kind of blatant crap, just because they raised money for cancer? What's wrong with you people who stand behind dickheads like Lance Armstrong or Steve Jobs when you know full well what kind of human beings they really are? Have you no self-esteem or self-worth yourself? They're not idols to be looked up to, they're examples of everything NOT to be. To rally behind them and what they stand for, when it's so obviously toxic to humanity, just rings of the pathetic self-loathing nature of those deranged women who write devoted love letters to serial killers on death row. What's wrong with you that you continually back these complete assholes as someone to look up to? Get a grip, just stop it and make the right choice for once in your life instead of repeating the same vicious cycle of being completely enamored with absolute shitheads. 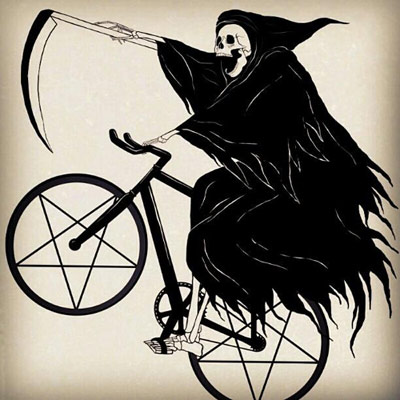 “Lance Armstrong cheated me by using drugs too!”

Lance Armstrong is not a decent human being just because he raised money for cancer, because HOW he raised that money for cancer also matters. What's next, Adolf Hitler was a decent human being, because despite never finishing a race, he contributed to society's technological advancement? Ridiculous! How about, Josef Mengele was a good person, because he furthered medical knowledge while butchering people? Preposterous! Next you'll be telling me that the Catholic Church is a wonderful institution, because it does good while covering up child abuse sex crimes, not to mention spreading messages of intolerance and hate? Asinine! It's got to stop, people! Please, call it how it really is and not how you wish it could be in your twisted and deluded mind. Lance Armstrong is a megalomaniac; an egotistical, home wrecking, hypocritical, lying, cheating, criminal, douchebag, dickhead, drug addict… who also raised money for cancer.

Related
Studies Show the Bearded Guy with Moleskin on the F Train is In Fact a Douchebag
Clara Dollar
Has Your Mother Been Seduced Into Joining a Polygamist Cult?
Sarah Vulpio
Welcome to Café Douchebag
Andrew Neil Cole
Resources