Last week at the Cannes Film Festival, a fashion designer by the name of Kanye West premiered his feature film, Cruel Summer, on seven panoramic screens inside of a parking-lot-pyramid. Don't ask me how I did it, but I managed to get my hands on the original script that Kanye wrote. Let's just say that the DONDA offices are a lot easier to find than you would think. Enjoy. 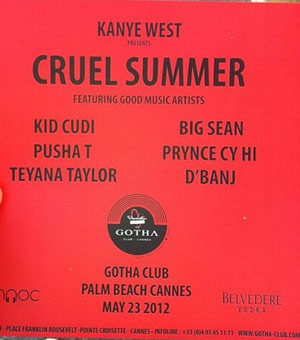 KID CUDI walks alone in the DESERT, his DIOR HOMME OUTFIT is tattered from wearing it more than once.

KID CUDI:
At last, I have escaped from the tyranny of my father. Although he wanted me to go into the family business of becoming a high-end Lamborghini thief, I have rebeled and run away into the desert instead. Without me, there's no way he'll be able to steal the emperor's famed Lamborghini Mercialag..Murciell..Mercy. I am liberated, free to do anything that the universe decides to put in my path.

KID CUDI turns the doorknob and walks into the shining light

EXT. AN EVEN MORE MAJESTIC DESERT WITH AT LEAST FOUR TIMES AS MUCH SWAG

KID CUDI walks through to the other side of the door and sees that ENORMOUS FLUORESCENT PINK PYRAMIDS dot the landscape of this DESERT. He looks out onto the horizon and sees two SHADOWY FIGURES on horseback approaching. They arrive and immediately encircle KID CUDI.

HORSEMAN 1:
We have been sent by the Avian Being to capture you. You possess the mythical powers of GOOD; powers that the Being wants for himself.

KID CUDI:
The Avian Being? You mean, some sort of Bird Man?

HORSEMAN 2:
Silence! You will come with us right now!

KID CUDI:
I could recognize that shrill voice anywhere. Mr. Hudson, is that you? How did you get into the movie?? If you're here, who's watching Cyhi right now?

HORSEMAN 1/CYHI:
I'm here. The only way Kanye would let us into his film is if we wore these stupid outfits that blocked most of our faces.

MR. HORSON 2:
Enough talk! It's time for a fight scene set to a song w— Kanye made.

KID CUDI fights CYHI and MR. HUDSON while high-tempo SWAG BEATS pump through the speakers. KID CUDI is no match for the HORSEMEN, who quickly overpower his skeletal frame with their FIRE-BREATHING HORSES. They secure KID CUDI to the horses with ropes and drag him into the sunset.

INT. A ROYAL PALACE WITH EVERY SINGLE TYPE OF FRUIT IMAGINABLE! INCLUDING FRUITS THAT KANYE WEST SAW IN A DREAM AND THEN INVENTED

KID CUDI lays heavily bandaged on a LUXURIOUS PERSIAN RUG WITH CHERUB IMAGERY. Light streams in through the open slots near the ceiling. The only other person in the grand fruit chamber is a BLIND SUPER-HOT PRINCESS who plucks lightly at a GIANT GUITAR STRING. KID CUDI wakes up and looks around.

BLIND PRINCESS:
Are you awake? They dragged you in here a day ago and left you. I have been locked away here by the Avian Being, forced to play this guitar until the day that I know enough to give his son lessons.

KID CUDI:
You're blind? That's horrible, that means you aren't able to see all the beauty in this universe! You can never know what the color red looks like, or experience the intricate patterns on this Kanyemelon! No. I may just be a humble son of a Lamborghini thief, but I vow to cure you of your blindness.

Suddenly, a GRACEFUL HAWK flies into the chamber through the ceiling slot in SUPER SLOW MOTION. A single feather drops from the wings of the hawk and lands on the LUXURIOUS PERSIAN RUG WITH CHERUB IMAGERY that KID CUDI is sitting on. KID CUDI picks up the FEATHER and approaches the PRINCESS. He begins to rub the FEATHER on the GUITAR STRING until it begins to sound like a REMIX OF A COLDPLAY SONG.

PRINCESS:
I'm cured! It's seems that a remix of that Coldplay song holds the cure for ocular blastoma! It's magic!

KID CUDI:
No, it's just that this movie is only 30 minutes long, and we still have to swag out for another 10.

The entire GOOD MUSIC roster and the NON-BLIND PRINCESS celebrate to songs off the UNITY album while 2CHAINZ and KANYE WEST run a train on KIM KARDASHIAN.

I Am Stepping Up to Run Garden Club Despite My Complete Lack of Gardening Knowledge
Sarah Totton
Sir, I Am Not Pleasuring Myself to the Pin-up Girls Painted on the Side of the Warplanes, Sir
Robert Criss
I’m Leaving My Body to Science
Brian Daly
Jeffrey Dahmer’s Sister Picks Up Printing
Caitlin Bitzegaio

I Insist You Stay with Me, and You’re Going to Hate It
James Klein
Journal Entries from Brandy (You’re a Fine Girl)
Virginia Dickens
I’ve Lived Longer than Any Dog Ever
Logan Corcoran
Proposed Rules Changes to the NBA
Jim Tatalias