Do They Know It's Christmas on the Moon?

This song helped eradicate hunger in Africa, but it can also cure Ebola!

‘Tis the season again for being bombarded with really weird Christmas songs that we all sing along to, but haven't really given the underlying message a second thought. So you know what that means… it's time for overanalyzing another Christmas song that you can NEVER EVER hear again without your mind going to a very dark place.

In the past, I've tackled "The Little Drummer Boy" (I get the sense that little guy is tackled more than a Vatican City altar boy) the ultra rapey "Baby, It's Cold Outside," and the overly-sexualized and materialistic hookerish song "Santa Baby." This year, I thought we'd analyze the overly-condescending and disturbingly arrogant song, "Do they Know it's Christmas?" written in 1984 by Bob Geldof and Midge Ure and sung by Band Aid. 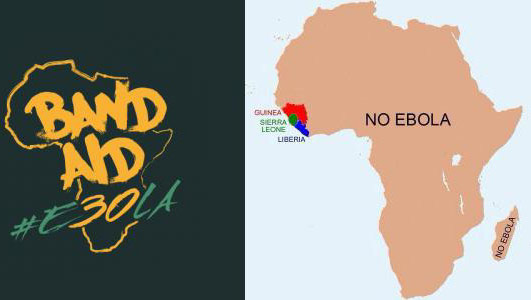 "Do They Know It's Christmas?"
With lyrics analysis!

It's Christmas time,
Seriously, who doesn't know that by now, this shit starts the day after Halloween these days.
There's no need to be afraid.
Tell that to the people killed in a Black Friday stampede.
At Christmas time,
But just then and only then?
We let in light and we banish shade.
Oh good, you're going to banish shade in Africa, I'm sure they'll appreciate that.

And in our world of plenty,
Rub it in why don't you?
We can spread a smile of joy.
Because religious proselytizing never causes any problems.
Throw your arms around the world,
Freakishly long arms are kind of disturbing. Just sayin'.
At Christmas time.
Seriously though, fuck the world the rest of the year.

But say a prayer,
Because you gotta have faith, right George?
Pray for the other ones.
Wow, Really? "The other ones?" Not for nothing, but that's kind of a shit thing to say.
At Christmas time it's hard.
Hard to not be a separatist dick?

But when you're having fun,
Wait, now only when having fun? This song has some strangely specific conditional criteria.
There's a world outside your window,
No one goes outside to have fun anymore, do they?
And it's a world of dread and fear.
As long as we don't get overly dramatic.

Well tonight thank God it's them,
Instead of you.
OMG! WHAT… THE… ACTUAL… FUCK?!

And there won't be snow in Africa this Christmas time.
Except for all the places in Africa that it regularly snows that is. In fact there are at least seven ski resorts in Africa, last time I checked.
The greatest gift they'll get this year is life. (Oooh)
Actually, Africans had life long before this song. In fact, anthropological digs have demonstrated that the oldest human remains were actually found in… um… Ethiopia!
Where nothing ever grows,
Wait, huh? When you say, "Africa" do you really mean… the moon? Because there won't be snow on the moon at any time, there is no life there and nothing ever grows… so…
No rain or rivers flow,
Yeah, no, that's the moon. I see the confusion now, you're singing about the moon, but you accidentally said, "Africa." Haha! That's funny though.
Do they know it's Christmas time at all?
Well on the moon, no, but in Africa, since 50% of the continent is actually Christian, I'm guessing yes. Not to mention, all the non-Christian people who are actually aware of religions other than their own.

Here's to you.
Cheers.

Raise a glass for everyone.
Oh, I'm sorry, I thought you were done with your toast and I had already started drinking. I never know when these damn things are over. I'm guessing since you now said, "everyone," that we can now drink…

Here's to them.
Shit. So we're toasting to me, everyone and them… anyone else, or can I drink this now?
Underneath that burning sun.
Surely, that goes without saying, even for the moon, but I know how much you love your specific criteria.
Do they know it's Christmas time at all?
We've been over this, but since you're easily confused by things, here's an example. You know how you are kind of vaguely aware of Hanukkah this time of year, because of those Adam Sandler songs? Yeah, it's like that.

Feed the world.
You might want to take a Geography class first, you know, just to get shit straight.

Feed the world.
Come to think of it, throw in an Astronomy class too, so you don't accidentally send food to the moon instead.
Feed the world.

A few Theology classes wouldn't hurt anyone either, to raise awareness and sensitivity of other cultures' already established religions.
Let them know it's Christmas time again.
They know… people get it… it's been fucking everywhere by now and they've already made their choice on the matter.

Feed the world.
Oh god, that's a terrible thought actually, what if all the Band Aid food actually got sent to the moon instead and that's why there are still hungry people in Africa? Logistics.
Let them know it's Christmas time again.
(Repeat)
For fuck's sake, they know… let it be. Now you're just being a proselytizing prick.

Africa does not equal The Moon.

Merry Christmas and Happy Holidays everyone! May you NEVER be able to listen to "Do they Know it's Christmas?" the same way again, which is my very special gift to all of you that you can't return for something else, even if you wanted to.

*To be fair, some of the more heinous lyrics have been re-written for the Ebola crisis, but the song still ended up coming off as overly-condescending and disturbingly arrogant.