You think work involves doing the most,
So the boss doesn't think that you coast,
But look at that man,
With the paper in hand,
He's known as the corporate ghost. 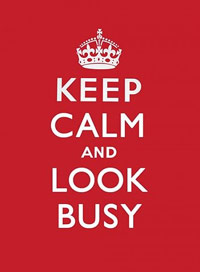 It may seem like his work is terrific,
But he reports to no one specific.
Instead he parades,
Shuffles papers all day…
Now your goal's to become that prolific.

While you bask in your new-office grace,
There are terms that you'll want to embrace
So as to appear
That you know why you're here;
There's synergy, metrics and "touch base."

Now when you're summoned out of the blue
To sit in your boss's office and explain what you do,
There's no need to bargain,
Just throw out the right jargon
And watch as you ace your review.

When a' courtin' the girls on your floor,
You may uncover the temp (office whore).
You may have a great time
And you think she's a nine
But in public she's really a four.

An eight-hour shift may be grueling
So you'll need ample time for refueling.
When you depart for your shit,
Grab your phone to transmit
Pics of cats that your friends find amusing.

In the office when you're right on the brink,
But that kitchen-smell still makes you think,
"Would I rather drink that coffee,
Or get chased by Ghadafi?"
Then just throw it right into the sink.

Don't mind all the cups and the dishes,
They've been left by the corporate militia.
If for reasons unforeseen
They all seem to be clean
The only answer must be "genie wishes." 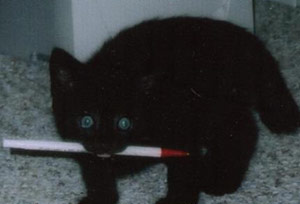 "Listen here, meow… I was just taking this over to Cindy's desk, she's meow all out of red pens, meow know?"Once you realize you're paid less than you should,
Don't be mad or get up to no good.
Just breathe and be wise,
Steal office supplies!
You'll be like a modern day Robin Hood!

Take stock of what there is to spare,
So when your supervisor's unaware,
You can load up your car
And then say, "Bitch, au revoir,
I'm stealing your adjustable chair!"

You'll most likely be asked to work late
So the boss doesn't end up irate.
To avoid confrontation
And sleep deprivation,
Take a nap on the most overweight.

When you're groggy the next day from the tension
Brought on by late-night apprehension,
Say you're going to eat,
Then nap in your back seat
And dream of the day you'll get pension.