Last weekend, Marvel's The Avengers opened in millions of theaters worldwide to the frenzy of comic-nerds and explosion-lovers all over. It will probably go on to break a bunch of box office records. Also last week, Rick Ross hosted a press conference in which he and Ciroc vodka announced the signing of Omarion to the MMG imprint. We will see how that plays out. 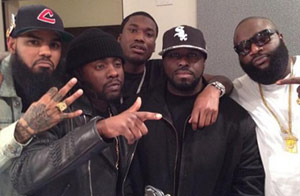 The MMG rosterWhile these two events may seem unrelated, they are very much intertwined in Rick Ross's mind. Think about it: press conferences are never fun, unless of course you live in a Marvel-esque universe, which Rick Ross kind of does. I mean, between his legions of fans, his shady origin story, and the villian story arc with Curtis, why WOULDN'T he think that? So while the common outsider may see Rozay's recent roster signees as a "sign of the times" in hip-hop, he's actually fulfilling a dream he's had since childhood: forming his own Avengers.

Bio: The general of the team, Rick is a no-nonsense leader whose office is the streets. Clad in military-grade bulletproof armor from the Reebok Big&Tall line, General Hungry is a master at hand-to-hand combat and is armed with elite negotiating skills. An eye injury from war left Rick needing to wear glasses at all times, and a sense of bravado keeps him from ever wearing the same pair twice.

Bio: A functioning alcoholic, Iron Mon-tana made his fortune with, um….teChnOlogy KnowlEdge and has used that money to build an armor that prevents him from feeling shame. Though he may be a bit rebellious, Iron Mon-tana is also a genius. In fact, he's only months away from developing a communications network that will make emails obsolete. General Hungry recruited him to be the brains of the operation and to ensure that the rest of the team stays in line.

Bio: When Rick found Wale, his body had absorbed dangerous quantities of gamma-rays emitted from a nearby lotus flower bomb. After nursing him back to health, the General introduced him to an audience of people, one of which offered some constructive criticism, at which Wale transformed. When he becomes "The Incredible Sulk," Wale possesses the strength of a million ambitious girls, able to send hundreds of profanity-laden tweets per minute. His power is unstable, but he is the exact wild-card that the MMGers need.

Bio: The preordained hero, Trappin America joined the MMGers right after he thawed out (from prison). A people's champion, he is armed with the ability to "slang" anything and have it come back to him in the form of cash.

Bio: After spending time in the other realm, th-O returned to Earth to help the MMGers fight his evil half-brother, Raz-B. A master of magic, th-O can cast spells with the twerk of his hands. In fact, he recently got his gold stripe in sorcery, which he proudly displays on the side of his head. It is rumored that th-O is immortal due to an unfortunate incident that left an icebox where his heart used to be.

Bio: I just needed a girl. Don't make me open her Wikipedia page and make jokes.