5 Tips to Avoid Getting Shot on Campus

You weren't relying solely on mass text alerts, were you?

In America, choosing to continue your education past high school can take quite the toll on your wallet and liver. But these days it's more than likely that each day you choose to attend a university or college class could be your last. It seems that all the high school sharpshooters that we were so afraid of five years ago have graduated and are taking aim at YOUR campus. In fact, the only person your parents fear more than the "masked gunman" right now is that Kony fellow the adorable child warned them about on YouTube.

Now, while it may seem that the only logical solution is to simply avoid going to class, lest you start ducking shots like Young Buck, I have five foolproof alternatives that are sure to save your life. 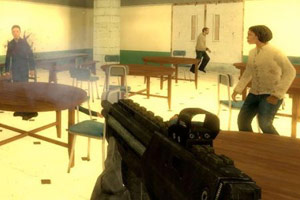 This is why you always grade on a curve. Upon their conception, games like Call of Duty and Counter-Strike were supposed to be nothing but mindless fun for the masses. However, thanks to lax gun laws and high tuition costs, those games have now become training simulations for everyday life. While you may instinctively reach toward the games where you play the gun-toting aggressor, your best chance of survival lies in the sandbox titles. Being behind the scope of an Akimbo UMP45 may be fun, but knowing how to dodge a hail of bullets from angry gang members is a vastly superior life-skill. In case shit indeed does go down, remember that the human body doesn't normally regenerate health (unless you were a part of Weapon X's past projects) so don't forget to "power back up" by seeking the nearest hospital after every altercation.

This one may seem obvious: just befriend the future gunman and you won't get shot, right? Not so fast. While that method would work, it's almost impossible to figure out exactly who might forget to take their medication and decide to go postal. What I mean by "that guy" is "that guy-who-everyone-sorta-likes-but-wouldn't-mind-something-horrible-happening-to." You know him; he's that fat guy who's been a senior since your freshman orientation, has spent a majority of his life wearing a baseball cap backwards, and is only fun to hang out with when there's an overwhelming amount of alcohol around. If you're standing directly beside him when the muzzle is exposed, your chances for survival rise by 100%.

3. Wear More Animals on Your Chest 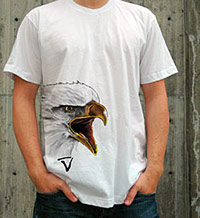 Now you blend in as a local thrift store, not a person. I'm talking seagulls, alligators, eagles, moose… that sort of thing. The logic behind this tactic is to blend in so well with your surroundings that the half-assed assassin doesn't even notice you're there. And who on this earth is less noticeable than people who wear golf shirts with the aforementioned animals? That's right, nobody! By limiting your wardrobe to items that can only be purchased in dark and smelly caverns, the shooter won't feel the need to waste bullets on you when he meets you in the hallway; he already cleared off dozens of your kind when he started his rampage in the library!

For all of her Grammy awards and adorable cockney accents, Adele is in many ways the embodiment of new-age teenage angst. In fact, if you pretend every ex-boyfriend reference is actually about her overbearing parents, you'll find yourself unable to distinguish between 21 and Simple Plan's Greatest Hits (it's an LP). The point is, your eventual "Kampus Killer" (© Fox News, 2013) is going to be well versed in the works of Ms. Adkins, so it helps to speak the same language. However, depending on your love life, the side effect of listening to nothing but Adele is that you may choose to throw yourself in front of the bullet.

This will be easy for many of you, but if you don't know where to start, just follow each step I've outlined thus far and you should be fine. The reasoning for becoming the unpopular weird kid is two-fold: obviously the gunman is looking for high-profile targets and won't want to shoot the weird kid, since nobody will miss him; and if you engrain yourself deep inside the burls of the woodwork you may even stumble upon the future assailant months in advance, allowing you to find out his schedule and conveniently miss class on the day he decides to show off his dad's hunting equipment.