Communion Would Be a Lot More Popular with Oreos

Second grade is a magical time in every child's life. You're learning about grammar, writing in cursive, and staring mystified at times tables. Your favorite dinosaur is stegosaurus and Cartoon Network seems relevant during daytime. For Catholic kids, though, it's time to eat Jesus.

You'd think that taking the body of Christ would be delicious, like a perfectly seasoned piece of medium rare steak, but it is the exact opposite: it literally tastes like cardboard. I've yet to see communion wafer nutrition facts on the box that prove they're not made out of 70% compact sawdust. If this is all symbolic anyway, then why can't the church bless a package of Oreos and distribute them accordingly? You'd see more children paying attention during the homily if they knew there was a Gushers fruit snack waiting for them at the end. 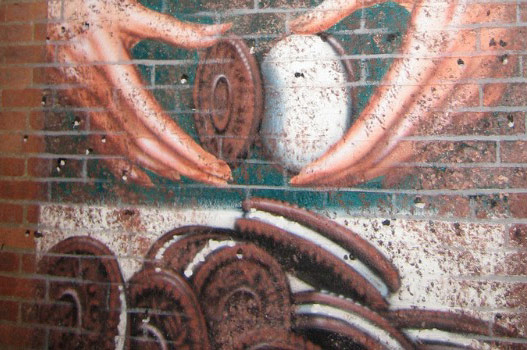 "The Body of Christ, twisted open for you."

"Welcome to the Church, children! For your second sacrament you get a stale unseasoned flattened crouton. Enjoy! Come back every week now. We have plenty more pieces of Jesus for you to munch on!"

I took the wafer from the teacher, blessed myself, stuffed it into my mouth, and walked calmly to the microphone. On our church bulletin board, there was a slew of supposedly charming photos showing the kids' reactions to the wafer. It was a collage of second graders with their noses rumpled up and eyes tightly shut as if they were all just given an enema. So, to avoid any unnecessarily dramatic photos, Miss Andrea warned that God doesn't need a bunch of amateur Macaulay Culkins in his house and to practice our "saintly faces." Anyone who turned up their nose at the taste would be kicked out of class and forced to retake it the following year.

This kid Jeffrey and I would be the first to try it as we had to immediately begin to sing stage right. We didn't get along as we both relished being the center of attention—him more so than me, but I digress. Not wanting to offend the big man or feel my mother's wrath, I took the wafer from the teacher, blessed myself, stuffed it into my mouth, and walked calmly to the microphone.

Then it was Jeffery's turn.

Jeffrey did the exact opposite. He made the teacher put the wafer on his tongue, dramatically made the sign of the cross over his entire body, bowed at the Jesus hanging above the altar, then proceeded to choke. He took two steps backwards, knocking down the other kids in line, put his hands up around his throat, and was immediately slapped on the back by Miss Andrea. As he began to cough, I rolled my eyes and began to sing. After all, my duet had turned into a solo and I couldn't have been more thrilled. "Hallelujah, hallelujah, hallelujah!"

It was one of Jeffrey's best performances. Really. Academy Award-worthy. Jeffery got his drink of water, a cold compress, and possibly a fruit roll-up while the rest of the students assumed their positions to take communion. I got to sing the song by myself into the only microphone. Jeffery had his legs up in a pew, and Miss Andrea could be heard muttering, "Thank God we have goddamned dress rehearsals." It really was a win for everyone.

Asking second graders to understand they're eating Jesus' body symbolically is a little ridiculous. You can't even expect a group of second graders to multiply simple numbers, yet we're asking them to accept Jesus into their hearts and our lives through a wafer? Ask any second grader if they're excited to make their first communion and I can promise you they're more pumped about a new white party dress and a big cake with a thick white crucifix made out of frosted roses. After all, no one is passing out party trays of the wafers at the reception afterward.