The Kardashians are going to destroy the Earth in gruesome fashion.

I don't have much time, so I have to write this out quickly before the vision is gone from my mind. I am a prophet. To be more specific, I am a drug-fueled prophet of doom. My name is Copernicus Thunderbird, and we're all fucked if Christmas goes down the way I think it will.

Sometimes, when I sleep, alien satellites beam messages into my dreams from the future. I don't give a shit whether or not you understand why that's possible or how it works. What you do need to understand is that the Kardashians are going to destroy the Earth. 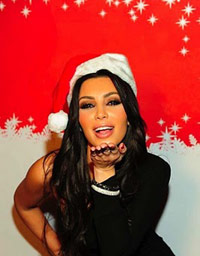 Kim's Kiss of Death Apparently these lizard people from Planet Kardashia are currently somewhat famous, though for what I have no idea. This dream was the first time I had ever heard of them. But the tabloids confirmed my fears: the Kardashians are real. And they're trying to take over the planet.

It's like this: there's going to be a show, on the television. A Christmas special. They won't warn you with commercials, it will just take over the screen from a pirate transmission directly from the Kardashian homeworld. I've seen it. It must be stopped.

First, Kim of the Kardashians will appear on the screen, flanked by her minions Clone Kardashian and Fat Kardashian, the Ambassador of Cake. The others will be there too. I don't know their names. All Kardashians look alike to me.

Kim rips off her face, revealing her true lizard form. She picks up a cell phone and starts screeching launch codes in an alien language. She'll stand around onstage and tell some bad jokes about her ex-husband or some shit while the other Kardashians are in the background raping an altar-bound Ashton Kutcher while screaming, "Give us your Earth seed!" They skin him alive and bathe in his blood, then Fat Kardashian decorates a tree with his entrails wrapped in tinsel. The studio audience, comprised entirely of Satanic Christmas elves, will applaud wildly.

Next, Kim will sing the Star Spangled Banner while twirling a flaming hula hoop. She'll be wearing a Santa hat and red sequin bikini, and the world will be mystified as the subliminal messages attack their fragile minds. In that instant, America and most of the other nations will be completely hypnotized and ready for a lifetime of alien servitude under the cruel whip of the lizard people. They will give away all their possessions and abandon their loved ones. Governments will collapse and businesses will shut down. 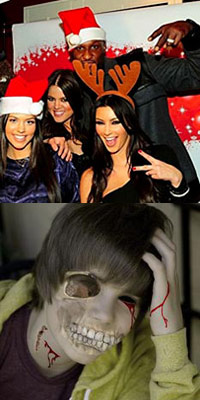 This is when things get REALLY ugly. An animatronic Justin Bieber will pop out of a curtain as the first guest. The Kardashians will feed it the newly-birthed alien Kutcher babies as it sings lullabies in auto-tune. This will cause 67.559% of viewers at home to die of a spontaneous aneurism.

At this point, Kim Kardashian's ex-husband whose name I won't even pretend to know rushes onto the set with a machine gun, slaying two of the lesser Kardashian drones. Kim screams at him, and says he's not allowed to be near her because he's gay. To this he responds, "I'm gay for freedom!" and tosses a grenade at Kim. But it's no use—Fat Kardashian dives in front of Kim, shielding her and forcing the grenade to bounce off of her belly and back at…I'm just going to call him Freedom Man from now on.

The explosion kills Freedom Man. The set of the show is in flames. Animatronic Bieber is still singing. He can't be stopped.

Kim rips off her face, revealing her true lizard form. She picks up a cell phone and starts screeching launch codes in an alien language to the mother ship.

That's when the photon torpedoes start firing and everything explodes.

Now, I don't know what happens after that, because that's the point where I woke up to take a piss and blow a guy for some heroin to keep the devil monkey off my back, but I'm assuming the end of the goddamn world. Sure, maybe at some point Paris Hilton challenged Kim to a naked catfight for mastery of Earth, and maybe we'd end up serving the cyber people of the Hilton Galaxy instead, but either way we're fucked.

I mean, unless maybe I had enough money to finish the spaceship I've been working on. Why, then I could just fly into outer space and take out the whole alien fleet myself. I think about half a million should cover it. What do you say, people of Earth? How about some Christmas cash for your old pal Copernicus?

Well fuck you then. Have fun in the salt mines, you greedy assholes.