Kim Kardashian and Paris Hilton are thrusting us into a historical new period. Grab a tampon.

Without many of us even being aware of it we have entered an ominous period in our history. To the untrained eye it may seem like nothing more than the battle of the bimbos—a showdown between Paris Hilton's show The World According to Paris and season 6 of Keeping Up With The Kardashians.

Most of us will be delighted to observe this competition between these masters of inanity. Who among us can resist seeing so much glitz and glamour and hair spray expended in the name of selling fatuity to the eager masses? This will be a cat fight for the ages. It won't be long before they're scratching each other's eyes out in bitchy Twitter exchanges. The high-minded among us will revel in this girl-on-girl action while the prurient few froth in anticipation of Paris' inevitable new sex tape bid to save her ratings. Sadly, the chances of this rivalry being resolved through an oil wrestling match remain rather distant despite numerous suggestions for it.

Geeks will be returned to their rightful place in the social hierarchy by instituting a 99% tax on tech ventures such as Google and Facebook. The critical point to grasp here is that there's far more at stake than just trash TV supremacy or the travesty of Paris launching a new show without a sex tape. This isn't just about who has the biggest hair or the biggest boobs or the smallest brain. This is about the role of reality television in doing far more than just entertaining us, misinforming us, and wasting our time. This is about reality television redefining who we are and what visions we have for the future. This television cage match will propel us into a new age—the Age of Bimbocracy.

While this may sound scary to some, it shouldn't be. Once President Palin enacts a constitutional amendment restricting presidential candidacy to only certified bimbos with at least one reality TV show to their credit, we will have a bright future to look forward to under our bimbo rulers. 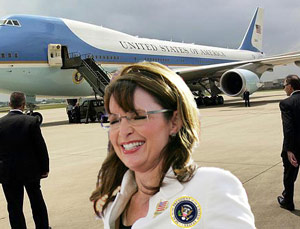 President Palin airs out her hotbox.The Age of Bimbocracy will be an enlightened one where no one will have to do their homework and incorrect answers will be accepted for full points on Jeopardy. Obviously there will be tax exemptions for all earnings on sex tapes and Playboy photo spreads. History books will be rewritten to correct mistakes about what Paul Revere was doing while he was out on his late-night ride.

On a more substantive level, America will finally get a universal health care plan, although it will cover only cosmetic procedures. Cancer treatment will be covered only if caused by silicone exposure from a faulty boob job.

Geeks will be returned to their rightful place in the social hierarchy by instituting a 99% tax on tech ventures such as Google and Facebook. This will eventually kill the American tech industry but in the short term it will flood government coffers with surplus cash, allowing us to pretend that we have more money than we really do, and isn't that what makes us Americans?

Unfortunately there'll be some losers in this new landscape, the most obvious being those bimbos who toiled away for years at their self-indulgent reality shows only to be considered unfit for the presidency.

But the experts are unanimous on the issue: we have nothing to fear about the Age of Bimbocracy. We are all advised to get ourselves in front of that television and soak up as much of this battle of the bimbos as possible so that when America becomes the next Mexican state, we can all tell of our grandchildren that we witnessed the start of this slide into bimbocracy and we fucking cheered it on.