A glimpse into how our future candidates plan to handle the undead.

After wasting untold billions of dollars and countless human lives, we here at Unethical Laboratories, Inc. are happy to announce that we have finally perfected our toaster-in-a-bathtub time machine. The secret trick was mummifying the "pilots" in electrical tape to keep them from dying. It took us years of trial and error to figure that out.

Several months ago, one of our pilots safely returned from the year 2016. His mission was simple: pick up a sports almanac from the future so that we could acquire vast riches from gambling. We stole that idea from a movie. Guess what? It worked.

I don't think we should give money to zombies. I think they'd rather eat our brains. I think we should shoot them all in the face. But while our man was in the future he learned a lot of interesting things, many of which we might as well tell you since we can't really bet on them. For example, Justin Bieber will die of autoerotic asphyxiation. "Leprechaun vs. Predator in the Hood" will become the highest grossing movie of all time. Polka music will become inexplicably popular among young people. And that's just the tabloid trivia.

The really big news is the American Presidential Debate of 2016. That's right, our boy saw the whole thing and he wrote up a transcript from memory. We believe it to be more or less accurate. He didn't recognize either candidate so he just referred to them as Republican Black Guy and Democrat Lady. It goes a little something like this.

Republican Black Guy: America, I want to address the number one problem facing our nation today. Not unemployment, even though many of you need to get jobs and stop selling drugs and collecting welfare. Not crime, either, even though there's a lot of that, too. The number one problem in America today is zombies. You know it, I know it, and my opponent knows it. Now the question is, what are we going to do about it?

Democrat Lady: We need to be focusing on the rehabilitation of all graveyard Americans. They need food stamps, medical treatment, affordable healthcare, higher education, and financial assistance. We should be offering them our love and support through these trying times. They're people just like you and I and they deserve the same rights as we do. 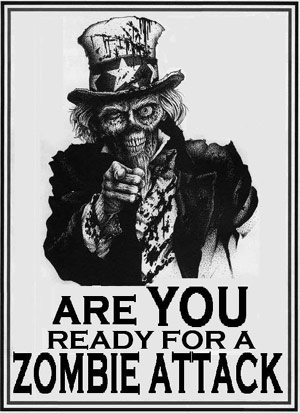 DL: I don't think religion has any place in this discussion. I would also appreciate it if you could refrain from using the racial slur "zombie." It's offensive. Remember, these people are victims, and as soon as we find a cure for LOLcat flu, everything will go back to normal. The issue is very sensitive right now. It's complicated.

RBG: No it's not. It's simple. We shoot them in the face. We pump money into the Army and the National Guard and we declare martial law. We send out neighborhood watch death squads. We make sure everybody owns a gun. We start selling bullets at gas stations and grocery stores. We should also be making more guns and more bullets. We are especially going to need lots of bullets.

RBG: Gun training starts in kindergarten. We start these kids out with low caliber handguns, probably .22s. We have to account for their tiny hands. By third grade they should be ready for micro-Uzis.

DL: That is ridiculous. What we need to be doing is increasing funding for hospitals, not spending more on our military and weapons manufacturing.

RBG: Hospitals are part of the problem. Every hospital in the country has been overrun with zombies. They're biting everybody. Doctors, nurses, janitors, cafeteria workers, old Joe that fills up the soda machines at night…everybody. To hell with the hospitals, I say we just blow them all up. Who needs them?

DL: You're seriously suggesting that we blow up hospitals?

RBG: Damn right. Schools, too, if we have to. There are only two ways to cure a zombie: Blow them up or shoot them in the face. Or cut off their heads. Three ways. Or set them on fire. Of course, that last one doesn't always work too well.

DL: Wow. Okay look, I don't know what kind of crazy rap lyrics you've been listening to but we are not going to start blowing up hospitals and giving machine guns to children.

DL: How is that different?

DL: I think you're missing the point.

RBG: Or was it a machine pistol? I forget. I'll have to ask my gun guy about that.

DL: What if your own mother was infected? Could you shoot her?

RBG: Already did. How's your mom?

DL: She's in the hospital.

DL: You leave my mother out of this!

RBG: Your momma so fat…

RBG: Shut up bitch, I'm trying to tell a zombie joke about your fat ass mom. Well shit, now I forgot it.

DL: You know what, fuck you! This is why I hate black people! You're all a bunch of bike thieving crackheads!

RBG: Bitch, what the fuck? I know your old ass can't be on the rag, so you must just be crazy! This is why nobody votes for women! Bitches be trippin'. Stupid ho.

DL: I got your ho right here, buddy! *grabs breast and crotch provocatively*

RBG: I should slap you in the face with my dick. *pulls out dick*

DL: Just try it, I fucking dare you! *gets on knees*

Libertarian Mexican Tranny: Vote for me or I'll kill you with zombies!