There is Life After Golf, Tiger Woods

You can pursue other endeavors after golf, Tiger. You don't have to keep hiring new swing coaches to adjust your technique. The ones you've been toiling with during the past few years are swinging at air. You are confused, but it's part of the human condition. We all get confused.

When you withdrew four days ago from yet another tournament, critics chirped louder than ever that maybe you're finished, that there's no way you're going to win five more major championships to surpass Jack Nicklaus with the most wins ever: 19. Five years ago winning 19 seemed not only attainable but likely. Now it is not only unlikely, it just ain't happenin'.

Don't buy into Jimmy V's speech about "never give up, don't ever give up." Punk out. Shame us and yourself. We're rooting for that.Everybody loses. Everybody fails. My best friend growing up told me my greatest athletic year was fifth grade. He was wrong to say it and it wasn't true, but friends, like fans, can be cruel. Life is a fair-weathered friend.

Do you have any friends, Tiger? Who calls you up just to see how you're doing, and who do you call to see how they're doing? Is there a golfer on the tour who wants to spend one second with you off the course? Do they like you, Tiger? Do they find you to be a nice guy? Do they forgive you for cheating with 15 to 100 women while married to a gorgeous wife? Did lying get you in trouble, break people's trust in you? Did you have to pay some $250 million in a divorce settlement? That's a lot of money, Tiger. What a bitch. But you're still rich even though your personal life is in a ditch and your golf swing has a hitch.

You had it all, Tiger. Then once your wife caught wind you were cheating on her you, you banged your car into a fire hydrant trying to leave your driveway. Man was she was gorgeous, Tiger, a Nordic goddess. There is nothing better than a Nordic goddess. Any guy could see that. Why couldn't you see that? Why did you drift off and do all that womanizing when all you had to do was hang out with your bombshell wife, win five more major titles, accept the crown for "Greatest Golfer Ever," and achieve the goal your father set for you when you were three years old?

You had it right there you Tiger. You were in the poll position, on the HOV lane to golf immortality. 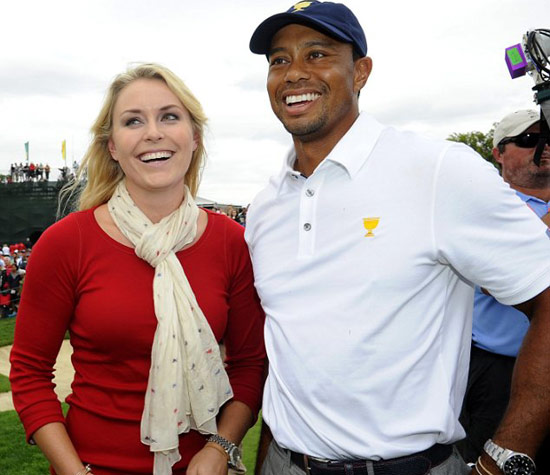 Dating another blonde was a misstep in your rebranding, but there's still hope.

But it's over, Tigress. You have to come to terms with that. Death crushes us all. I know you're competitive, but your golf game has abandoned you. Once a golf genius, you're now a golf jalopy. Welcome to life as most of us know it: strugglers, not great at what we do, practicers but not masters, nor Masters champions as you were.

Would you do anything to put on that Masters green jacket just one more time? Just once? How many people would you step on to slip on that jacket one more time? How many belittling comments to people in the galleries at tournaments would you unload? How many golfers in your two-some would you try to intimidate by not speaking to them for the whole round?

So many oceans you are away from another green jacket that you should close camp, shutter golf operations, and do something else. Give up. Quit. Don't buy into Jimmy V's speech about "never give up, don't ever give up." Punk out. Shame us and yourself. We're rooting for that.

The good news is that you have other natural talents worth refining. Marketable talents, and that's the key. On certain cable TV channels there are movie acting opportunities in which you don't need to memorize any lines. No prep work. You just show up and use your athletic prowess with only one performer. Real simple. You've always loved those one-on-one situations. They are your oyster.

Golf fans who stay in hotels would flock to your performances. You will have successfully parlayed a stellar golf career into another synergistic line of work. You should brand yourself "Tenacious Tiger" and create a new "TT" logo to put on your hat. Rebrand everything about you. You have to admit your old brand is a tad bit tarnished. It's time to turn the page.

Your movies, at first only viewable in certain hotel rooms, would become such rich and valuable performance art that YouTube would buy the rights to post all of them. Content is king. Once these go viral globally—as they no doubt would within an hour—you would win back your popularity. The fans who abandoned you after all your womanizing would, ironically, become your fans again for all your womanizing. Did you ever think about the concept that irony is like the circle of life? This is your life, TT, and it's about to come full circle, ironically.

Context matters. Instead of lying about your womanizing as you did to you wife and all of us, you would be viewed through a different camera lens, as an honest man doing an honorable day's work. You would be respected for making an acceptable living, punching the clock like the rest of the global workforce.

You would be back on the radar, swinging your club again. The Golf Channel would do feature stories about you. But this go-round, instead of ripping your golf game, they would tout your natural talents, your rebirth as an entertainer. You will have created a fresh new angle on your life story. Everybody loves fresh new angles. America loves to tear its superstars down and then build them up again.

We want to build you up again, Tiger. We need you to get up for this opportunity.

Turn Tenacious and we will never bother you again about your golf game. Until we find out—as we inevitably will—that you've been cheating on us again.

Related
Discarded Scripts Found in L.A. Dumpsters After Pilot Season
Mary Siroky
After Yet Another Workplace Accident, NASA Is Banning the Following Basketball Moves
Ryan Ciecwisz
How to Protect Your Stadiums from the Swarm of Sports Fans Emerging after 16 Months
Nicole Erb
Resources