Sin for the Win!

Gluttony, greed and lust all have a place in the world of pro sports.

Se7en is a creepy movie. Not because of the title's subliminal endorsement of interspecies relationships, I'm cool with that. What a man does on his farm is a private affair. Vive y déjà vivir. Who am I to judge? I don't have a law degree. What bothered me was the whole decapitated head thing. That message: "Don't sin, the guillotine's still very much alive. Down with le Bastille!" Let's just say I like the ending of every Disney movie ever made much better. It's nice when your insides feel smiley.

And it's not just that, man. There's the rule of: "Hey, you sin a lot? Really? Well congratulations! You're going to get a taste of ridiculous Kevin-Spacey-level-sin until you OD from that beautiful thing you once loved so dearly." Sounds a bit like the destruction of dreams. Flashback: Pokémon cards circa 2001. Only I didn't die, physically. Whatever, I was thirteen, don't judge me. But… I want to set the record straight: movies are fake. Like aliens, or Hanson. Se7en lies to us, because it's possible to get away with sinning in nearly every profession. Yes, even athletics (there's that transition!).

Professional eating puts gluttony on the pedestal of shame and misguided reverence Augustus Gloop only dreamed of. Look at the world of sports—none of your sinful behavior will ever prevent you from leading the life of a professional athlete. You've just got to choose your sport wisely. So set up a landscape of debauchery and allow me to dip my brush into that thur' bucket of devil's perspiration. Here you have it, a gorgeous black and white exploratory textrait on the relationship between professional athletics and those amoral demonic two-steps we lovingly call "sins."

Let me teach you how to Dougie.

The Unbearable Heaviness of Being. Someone who gives you that "fat vibe."

Focus on your opponent and nothing else.History and popular images like to mess with us on this one. There was no flab on Russell Crowe or any of his homoerotic Roman gladiator buddies; and Gatorade commercials certainly don't show the fat chubby kid keeping stats and drinking his Riptide Rush with creepy levels of sensuality. Instead, Gatorade likes to bring out the urban 300 crew and have them slam dunk bballs like a Monstar. But little big man, don't put down your Milky Way yet! Grab 25 more and go buy a stopwatch. Bought the stopwatch? Good. You are now a professional eater.

Professional eating puts gluttony on the pedestal of shame and misguided reverence Augustus Gloop only dreamed of. It makes Thanksgiving look like an Olsen Twins breakfast. Shovel mind-boggling amounts of artery-clogging garbage into your well-trained mouth dump in as little time as possible. Whoever said non-automotive racing days were over after you see 250 on the scale never heard of the MLE. Yes, there is an officially sanctioned league acronym for Major League Eating, so you know it's for realzies. Sure you may be scraping the bottom of the barrel in the double-X chromosome sector, but beggars can't be choosers. Just watch out for the skinny Japanese guys, they have as much respect for their bodies as an Outback Steakhouse regular.

However, let's say you feel the MLE is too exploitive and you want your largess to be dignified and graceful. Suspend your disbelief and turn to the aforementioned Japanese man. Let him educate you in the athletic display that is the sumo. This sport is badass! If you achieve greatness you get the title of "yokuzuna," while in regular sports you get the now seemingly lame status of "all-star." Matches last a few seconds, so you can sit down and eat your backpack of fried calamari ASAP. Best of all you get to wear a sexy adult thong diaper. Old single people at retirement homes have been lobbying Depends for years, and these sumo wrestlers get to wear them out of "tradition." So next time you're at a water park, or waiting in line for a funnel cake, please know that smile-bearing eyesore could be a professional athlete.

Refer to Scrooge McDuck from the multi-award-winning Ducktales, i.e. most people with a top hat and cane. 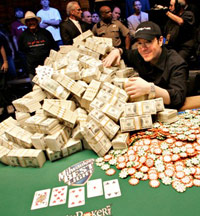 Stack your chips and refuse to leave the game until you can't see your opponent next to you. "This one's easy, John, all athletes want to roll in Fat Joe-inspired pimpy rides and push obnoxiously gaudy fashion to its wealthiest limits." True, but I counter. These athletes aren't where they are because of greed. No, if greed runs through your blood, I've got a sport for you. Oh, you also drink Milwaukee's Best? Perfect. Enter the world of professional poker.

Don't tell me this isn't a sport. Entertainment Sports Programming Network one and two broadcast these chip-yielding degenerates on the reg. I mean come on, the guy who lit this sport on fire is named Chris Moneymaker. Yes, Chris Mysinisgreed Moneymaker. I don't see any Lebron Dunkscorers or Ichiro Hitmachines winning championships in their respective sports. You sit at a table for hours (see "Sloth") and acquire as many greed chips as possible. You get to interact with a lot of "dirty-hot" chicks too. The ones who could never make the trip home to your parents, but elicit flurries of high-fives from your wasted buddies. So yeah, that chain-smoking degenerate with the bags under his eyes and the escort around his arm is a professional athlete, while buying ten lotto tickets a day is considered "amateur and excessive."

"If music be the food of love play on." -Willy Shakes

"I like doing the dirty to Nine Inch Nails songs." -Warren Buffet

"Lust, oh how you make my nether regions dance to the strum of your piccolo." -Me 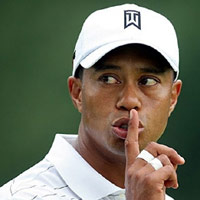 "If pussy be the game of golf, hole it out." -Tiger Woods That's right, I respect the lust game. See, I even made up a euphemized boner quote. But I'm going to cheat a little on this one. Pure lust is only a sport in Central American dive bars. However, lust is essential for success in athletic endeavors. (Yeah I know I just refuted my whole greed thing—deal.)

Tell me if you can identify the author of the following quote (quotes!):

"Have you ever had a golden shower done to you? … just morbid curiosity."

Charlie Sheen, Gary Busey? Sure, they've said similar things, but no. That's a text from arguably the greatest golfer of all time: Mr. Tiger Eldrick Woods, when he was winning majors. Ever since this poor guy's lustful text-bombs saddled up with the Declaration of Independence, joining the public archives, he hasn't won a thing. Sure he made a run at the Masters, but the Tiger didn't win. He lost to someone named Charl Schwartzel. Yeah, a guy with the name of a host on a terrible German children's show. Welcome to Charl Shwartzel's Fuhrhouse.

Tiger just got caught. There are plenty more examples of the power of lust. Wilt Chamberlain makes Tiger's sexual accomplishments look like the life of an acne-ridden 13-year-old, and he scored a lot of points. Ben Roethlisberger doesn't necessarily let lust come to him, but is still quite the fan. And Kim Kardashian single-handedly proves that athletes love themselves some big-booty lust-filled playthings. So to sum up, is lust your jam? If so, move to Panama, or become a pro in any sport, because this sin ain't stopping you from winning a thing. Sidenote: Add more championship rings, expect exponential lust growth.

There you have it. Those are the big three. We've also got sloth, wrath, envy, and pride. But I'm feeling lazy and will be vengeful after seeing articles more humorous than mine, so you don't deserve to read any more of my groundbreaking material, infidel. See what I did there. Go put on a jersey and butt-slap a teammate, you sin-wielding athletes.

Related
So I Hear You Know Photoshop
Rochelle Elana Fisher
Clues That You Are Controlled by a Microchip Your Dentist Implanted in a Filling
Radu Guiasu
Hey Neighbor, Will You Please Watch Me Write My Screenplay?
Nathan Cowley
Resources